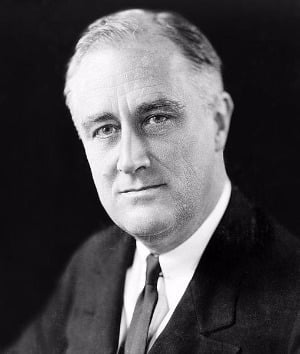 32nd President of the United States of America

Considered by many to be one of the quintessential American leaders of the 20th century, Franklin Delano Roosevelt, who quickly became known as FDR, was the 32nd President of the United States of America.  His leadership, guidance, and solutions to national issues made him a central figure in world politics for some of the most defining moments, both nationally and internationally, in recent memory.  As the only president to be elected to more than two consecutive terms, Franklin Roosevelt was in office from March 4, 1933, to April 12, 1945, when a cerebral hemorrhage removed him from office and claimed his life.  Even after death, his impact on the world would be felt resonating for years to come, leaving behind a dramatic legacy of international political organization and national economic rejuvenation.

Considering his popularity in one of the most populous states in the nation, he quickly became a contender in the national political arena, getting the democratic nomination for the 1932 Presidential Election.  He would win this election with 57 percent of the vote, winning all but 6 states during the election that many political analysts say started the transition of the national political arena to a democratic minded system.  His first task, the Great Depression.

Considered the worst economic crisis in U.S. history, Franklin Roosevelt would take on the issue with the New Deal, an act that focused on relieving those who were out of work by creating new jobs.  These new jobs would help to bolster the economy to a state where is could be reformed, helping to prevent the crisis from happening again.  During this period, he would work to cut government spending, allowing for more funds to help the economy recover, and he would also repeal prohibition, the ban on the sale of alcohol, in 1933.  His later work are turning the economy back around came after the Congressional Election of 1934, when democrats would gain a large majority in both Houses of Congress.  Included in this new legislation was the Social Security Act and the Works Progress Administration.

His second term was won by a landslide, and while the economy would continue to improve, he would spend more of his time working on keeping his legislation in place.

His isolationism would come to an end following his election to a third term as president. Many would criticize him for running a third time, but since there was no constitutional amendment for this just yet, it was still considered to be legal.  Franklin Roosevelt would then align the country with the Allied Forces, offering anything short of engaging in actual warfare.  The neutrality of a nation would be shattered by the events of December 7, 1941, when Japan attacked Pearl Harbor, resulting in the deaths of nearly 3,000 U.S. military personnel.  Declaring war, in alignment with Great Britain and Russia, the country would then take on Germany and the Third Reich, followed by Japan and the use of the first atomic weapon in combat. Both countries would be defeated at the hands of the allied forces.

A fourth term victory for President of the United States was guaranteed, with Roosevelt winning 53 percent of the vote in 1944, even though he was in failing health.  He would die only a few months into his term of a cerebral hemorrhage on April 12, 1945, a prediction his doctor had made during his campaign.

He petitioned the Ancient Accepted Scottish Rite in the Albany Consistory of New York, February 28, 1929, and received his 32nd degree the same day. On March 26, 1930, he became a Shriner in Cyrus Temple, AAONOMS (Ancient Arabic Order Nobles of the Mystic Shrine), Albany, New York. He was also a member of Greenwood Forest, Tall Cedars of Lebanon in Warwick, New York. On October 30, 1931, he was made a Prophet at Sight in Tri-Po-Bed Grotto, MOVPER (Mystic Order Veiled Prophets of the Enchanted Realm) of Poughkeepsie, New York. Franklin Roosevelt held a number of honorary memberships in various Masonic lodges, among them in the Architect Lodge, No. 519, New York, where he raised his sons, Franklin, Jr. and James, on November 7, 1935. He was also an Honorary Grand Master of Georgia, and, in 1934, was made Honorary Grand Master of the Order of Demolay.