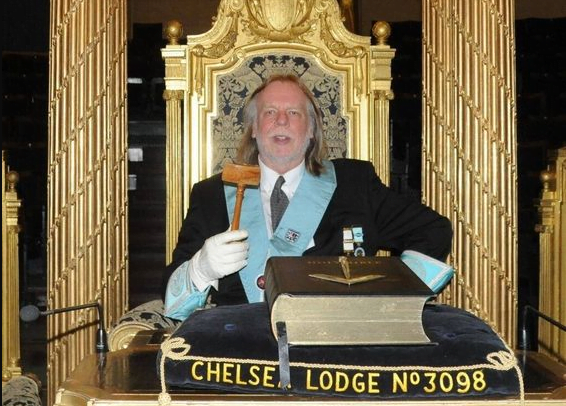 Rick was initiated into the London-based, Chelsea Lodge in 2008 becoming its Worshipful Master in 2014. The video below describes part of his journey into the fraternity and why he became a freemason.

Chelsea Lodge 3098 is known as the world-renowned “Entertainers’ Lodge”

Contrary to what you might first imagine the Lodge derives its name not from any links to that part of West London but from a group of entertainers who, in 1905, were appearing at the old Chelsea Theatre in London’s West End and sought dispensation to form a new Lodge.

The Chelsea Lodge meets officially five times a year, but it holds 42 LOI’s! They work the Logic Ritual, and this demands a very high level of competence, particularly in floor work.

Famous for their charitable giving the Chelsea Lodge has raised over £100,000 in the past five years, and this is one aspect of Freemasonry that appeals to Rick. He went on to quote many examples of the Lodge coming to the aid of members while supporting a wide range of charities including, the London Masons Cyberknife Appeal; Prostate Cancer; Brain Tumour UK; Mercy Ships and The Forces Children’s Trust. The Lodge also contributes an annual bursary to the Sylvia Young Theatre School. Much of the money is raised through ‘The Chelsea Lodge Road Show’, a loose grouping of Lodge Members who will attend a Lodge meeting and give a talk on the history of Chelsea Lodge followed by a cabaret at the Festive Board.

You can visit their webpage here http://www.chelsea-lodge.org.uk/

Rick along with Comedian and ex-King of the Jungle, Joe Pasquale has become Patron of Lifelites