Bro. Sheldon A. Munn (a member of Lafayette Lodge #194, Selins Grove, PA) is a student of the Civil War, particularly the Battle of Gettysburg. Bro Munn gives many lectures as well as writing on the Civil War and is a licensed Battlefield Guide at Gettysburg We thank him for preparing this Short Talk Bulletin.

The Battle of Gettysburg was fought in the hot, sticky days of July Ist, 2nd and 3rd, 1863. Confederate General Robert E. Lee had brought his 70,000 soldiers north-ward for food and supplies; to relieve Virginia from the ravages of war; to in-fluence the powerful northern Peace Party to stop the war, and to gain Confederate recognition and support from Britain and France. Lee also was looking for an opportunity to defeat the Union Army away from its base in Washington, D.C.

Twenty-seven months before the Battle of Gettysburg, the first shots of the war between the states were fired between Masons. Confederate Brigadier General P.G.T. Beauregard fired on Union Major Robert Anderson, defending Fort Sumter in Charleston, South Carolina. Beauregard was a Mason and Knight Templar from New Orleans, Louisiana. Anderson was a Mason from Trenton, New Jersey.

As the war began with shots fired between Masonic brothers, so did the greatest battle of the war. It was in the morning hours of July 1, 1863, when Lieutenant Marcellus Jones fired the first shot that began the Battle of Gettysburg. Jones, a carpenter and a Mason from Wheaton, Illinois, used a Sharps 52-caliber breech-loading rifle, invented and manufactured by Christian Sharps, a Mason from Philadelphia. The shot that Jones fired was directed at Confederate troops led by Brigadier General Henry Heth, a Mason from Rocky Mountain Lodge in the Utah Territory.

Later that morning, Union Brigadier General Solomon Meredith, a Mason from Indiana, and Colonel Lucius Fairchild, a Mason from Wisconsin, met and held the Confederates on the bloodied fields and woods between Herrs Ridge and the Seminary for over 8-hours. Among those attacking Merediths legendary Iron Brigade and Fairchilds hard-fighting 2nd Wisconsin Infantry regiment was Con-federate Colonel James Connor, a Past Master of Landmark Lodge in Charleston, South Carolina. Colonel Henry Morrow of the 24th Michigan was with Merediths Iron Brigade. During the furious fighting, Mor-row was struck in the head by a Confederate bullet. Later, a Confederate surgeon, identifying himself as a Mason, decided that Morrows scalp wound was too serious for him to be marched away as a prisoner-of-war. This act of Masonic compassion probably saved Morrows life.

The very first regimental volley of the battle was fired by the men of the 56th Pennsylvania Volunteers, led by Colonel John W. Hofmann, a Mason from Nor-ristown, Pennsylvania. Before the first days battle ended, Hofmanns bloodied regiment would be forced from the fields north of the Chambersburg Road by a gallant charge led by Major William Cox, commander of the 2nd North Carolina infantry. William Cox was a Mason from Raleigh, North Carolina. He was wounded eleven times during the war and would later become a Brigadier General. Cox also became a Congressman and served as the Grand Master of North Carolina for four years.

Early in the evening of the 2nd day battle, on the ridge north of Devils Den, Union Major General Winfield Hancock told Colonel Edward Cross, Today you’ll earn your star meaning that Cross would win his promotion to Brigadier General for his brilliant service over the past two years. Colonel Cross, a Mason from New Hamp-shire, had received twelve wounds during his heroic service, however his thirteenth wound would be fatal and he was killed leading his brigade against the attacking Confederates led by Brigadier General George Thomas Anderson, a Mason from Atlanta, Georgia.

According to Lieutenant General James Longstreet, commander of the Confederate First Corps, the most gallant charge of the entire war was led by Brigadier General William Barksdale, a Mason from Jackson, Mississippi. When Longstreet ordered him forward, Barksdale was on the front-line. It was in that position, after forcing the Union lines to collapse and retreat, that he was shot mortally wounded wearing a clean white linen shirt fastened with Masonic studs.

Barksdale’s courageous charge was directed at the bloody Peach Orchard, defended in part by the men of the 2nd New Hampshire regiment (Co. B) led by Captain Thomas Hubbard, a Mason from Concord, New Hampshire. Hubbard was killed on the battlefield and was buried by Confederate Masons.

Consider the significance of this act, when soldiers in the midst of a major battle, take the time and care to bury an enemy soldier! Unusual in every sense of the word, but not so unusual when you consider that it happened between Masons.

While the entire southern end of the battlefield erupted with savage fighting at the Peach Orchard, the Wheatfield, and Devils Den, a hero was born on the rocky, wooded southern slope of Little Round Top. Colonel Joshua Lawrence Chamberlain, formerly a language professor at Bowdoin College in Maine, was in command of the 20th Maine 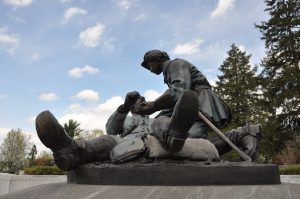 The determined Confederates launched attack after attack against Chamberlains shattered line. The gallant defenders held their position heroically despite their fearful losses. Running out of ammunition, and without reinforcements, Chamberlain knew that the next Confederate attack would destroy his line and cause the loss of the Federal armies strong defensive position. It was then that Chamberlain, a man schooled in religion and language, ordered his men to fix bayonets and charge the attacking Confederates in a swinging barn-door like maneuver. His unorthodox attack shocked the Rebels, causing them to scatter in hurried retreat. Chamberlain was a Mason, a member of United Lodge in Brunswick, Maine. He would receive a Congressional Medal of Honor in recognition of his courage and heroism at Gettysburg.

While Chamberlain was gallantly defending the southern end of the Unions fish-hook shaped line, another Mason was desperately trying to overrun the Union army on the opposite end of that line on Culps Hill. John Brown Gordon, a successful businessman and lawyer from Georgia, had fought with brilliance throughout the two years prior to Gettysburg. Gordon had been severely wounded nine-months earlier at the Battle of Antietam (September 17, 1862).

A bullet hole in his hat had saved him from drowning in his own blood as he lay unconscious on the battle field. Gordon was a man of extraordinary compassion and care a trait taught at our fraternities holy altars. During Gordons attack on the first day, which resulted in the Confederates forcing the Union Army to retreat from their position in the fields north of Gettysburg, Union Brigadier General Francis Barlow was severely wounded. A Confederate bullet paralyzed his arms and legs. When Gordon, in the midst of his attack, saw Barlow, he dismounted, gave Barlow water from his canteen and saw that he was cared for. Another insistence where a Masons compassion and care for his brother transcended the hostility normally found between enemies. The Battle of Gettysburg was culminated in an attack, the likes of which the world had never seen, nor would ever see again. It was on the afternoon of July 3rd, following a two-hour cannonade of volcanic proportions, that three Confederate Generals, all Virginia Masons, led the attack that has become known as Picketts Charge. Correctly named Longstreets Assault, Major General George Pickett, Brigadier General James Kemper, and Brigadier General Lewis Armistead led their 12,000 men across the mile-long rolling fields to crash against the center of the Union line near the clump of trees that became the High Water Mark of the Confederacy.

As the Confederate tide swept closer to the Union line, a sergeant in the 14th Virginia Infantry came upon some Union skirmishers huddled in the tall wheat, who had been cut off from their retreat. The Virginians would have been fully justified in killing the Union soldiers. They were the enemy! But the sergeant recognized a Masonic sign the sign of distress thrown by one of the Yankees and ordered his men to pass them by. Wasn’t it fortunate that the Virginia Sergeant, Drewry B. Easley, was a Mason a member of South Boston Lodge, in Halifax County, Virginia.

Brigadier General Lewis Armistead was the only officer to pierce the Union line. As Armistead crossed the low stone wall that formed the front of the Union defense line, he shouted, Give em the cold steel boys! Holding his black hat on the tip of his sword to guide his men, since all his color-bearers had been killed, he led his 150 Virginians amidst the swirling tide of blue-coats. Placing his hand on a hot, smoking Union cannon barrel, he claimed it his, in the name of the Old Dominion. Instantly he was struck by two bullets and fell, giving the sign of distress, . . . as the son of a widow. At the same time, Major General Winfield Scott Hancock, the general commanding the Union troops defending the line at the center of the Confederate attack saw his old friend and Masonic brother fall. Hancock, a member of Charity Lodge in Norristown, Pennsylvania, who was severely wounded at the same time, ordered his chief of staff, Captain Henry Harrison Bingham, a Mason from Philadelphia, to go to Armisteads aid. Bingham had Arm-istead taken to the 11th Corps field hospital where he received the best medical care possible. When Armistead died, Hancock saw that his personal belongings were handled according to his wishes. The Armistead-Hancock story is most unusual, especially when you consider that they were, in fact, enemies. But it is not unusual when you consider that they were Masons. Again we witness the power of brotherly-love, care and concern … transcending the most severe hatred and hostility associated with battle.

The Battle of Gettysburg was fought between 70,000 Confederates and 93,000 Union soldiers. Over 50,000 men became casualties in those three terrible days. The Confederate Army would retreat back into Virginia and the war would continue for another eighteen months.

Come with me, to that chill, damp, Easter Sunday morning on April 9, 1865, in Appomattox, Virginia, when over 112,000 well-fed and well-equipped federal soldiers surrounded the 26,765 starving, ragged Confederates all that remained of the once invincible Army of Northern Virginia. It was a time for the Yankees to shout and cheer! It was a time to celebrate. It was the end of the war the bloodiest, in American casualties, that the world had ever seen or would ever see again. 618,000 men became casualties. But, the killing years were finally over! No one would have disputed the Yankees right to scream, shout and cheer. But when Confederate General John Gordon brought his battle hardened Stonewall Brigade on the field to lay down their guns and furl their tattered flags, Union General Joshua Lawrence Chamberlain ordered his men to give their former enemies a full military salute. It was an honorable and heartfelt act. It was the first act to heal the wounds of a nation and that greeting was given by a Mason! It was an act that uplifted the spirits of every man present. But then what would you have expected? Remember that both Joshua Chamberlain and John Gordon were Masons, representing a brotherhood that was never divided, now dedicated to a nation indivisible.

Let us take pride from the heritage of dedication and heroism demonstrated by our gallant brothers who advanced the principles of freedom, liberty and justice. And let us share that pride with all Americans to the advancement of our fraternity and the good of America.