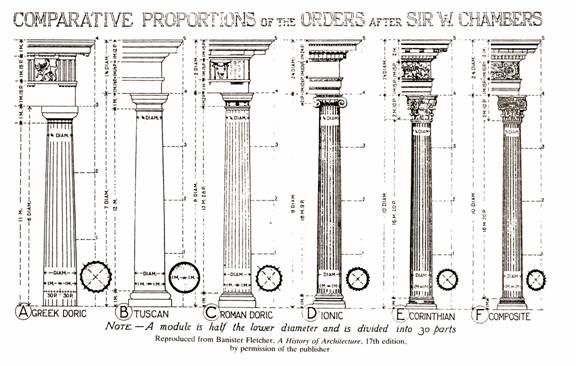 THE FIVE NOBLE ORDERS OF ARCHITECTURE

Our rituals, as a general rule are reasonably straight forward and self explanatory, but on occasion some matters are only touched upon briefly and in consequence, can leave one puzzled about their full meanings. One such matter is the phrase, FIVE HOLD A LODGE IN ALLUSION TO THE FIVE NOBLE ORDERS OF ARCHITECTURE, NAMELY THE TUSCAN, DORIC, IONIC, CORINTHIAN AND COMPOSITE. But what are the peculiarities of these different orders? First, let us look at the term, Noble. A diligent search through many encyclopedias, dictionaries, books of knowledge and books specifically relating to architecture, has failed to reveal the term and this suggests that it is only used in Masonic literature, but is not conclusive. However, Mitchell Beazleys Pocket Guide to Architecture refers to these five orders as Classical Orders, so it can be assumed that both of these terms are synonymous. Even though it is the peculiarities of the separate orders which will be the main subject matter of this article, it is first prudent that we make a study of their similarities. Some columns, but not all, are supported by a Pedestal, usually of square section. This can take the form of a square, shallow, plain block, but where a higher pedestal is used, say up to a third of the height of the complete unit, it consists of a Base, a Dado, which can be plain or ornamented and a Cornice. The column proper is also divided into two or three named parts. First the Base, which is a series of annulets or ring-like moldings, the Shaft and the Capital, which by its design, is the manner by which each order is recognized. It is interesting to note that the Greeks were the first to establish the orders and the Romans followed suit, making some alterations, modifications and additions.

We will begin by examining the details of the Doric Order, because it was the First to be established by the Greeks. It was the one which they employed predominantly in their buildings. The general consensus is that the column was developed from earlier wooden forms. This, from the resemblance of cornice details to the forms used in early carpentry. By the seventh century B.C., the type had arrived at a definite form and subsequent improvements led to the production of the perfected order of the fifth century B.C. Examples are to be found in the Parthenon and the Propylaea at Athens, and was in continual use by the Greeks until the second century B.C. An outstanding feature of the Greek Doric column is that it has no base and a more substantial shaft than the other orders. It is generally treated with twenty flutes and it terminates in a simple capital of a group of annulets, a convex curved molding which is referred to as the Echinus and a square slab called the Abacus on top. The Roman Doric was derived from the Greek, but the design was probably influenced by the appealing aspect of a more slender shaft developed by the Etruscans. This column was not frequently used, but examples may be viewed in the Coliseum and the Theatre of Marcellus. The Roman Doric also differs from the Greek in that it incorporates a base and has some changes to the profile of the capital.

Although departing from the principle of explaining the orders chronologically, it is fitting to introduce at this point, the Tuscan Order. Established by the Sixteenth century Italians, it is of comparatively recent origin. A much simplified example of the Doric, it is unfluted and has no adornments on the capital. It is also known as the Roman Doric order referred to earlier.

The next Noble order to emerge was the Ionic which attained full development by the sixth century B.C. Primarily a creation of the artisans of Asia Minor, which is the Asian portion of Turkey, where some partially developed examples of the order have been located, it appeared in Greece in the fifth century B.C. The one complete example of Greek Ionic can be seen in the Erectheum. This is a temple built from Pentelic marble on the Acropolis in Athens. Greek Ionic columns are slender proportioned, their height generally being about nine times their lower diameter and usually having twenty four flutes. The capital is characterized by spiral scrolls known as Volutes. These scrolls are viewed at front and rear of the capital. The Roman Ionic differs from the Greek in the manner that the volutes protrude from the capital forming four corners. In both the Greek and the Roman, echinus moldings are used in conjunction with the scrolls and are generally highly ornamented.

The Corinthian is the most elaborate and highly decorated of all the orders, attaining its period of full development around the middle of the fourth century B.C. Strangely enough, the Greeks made very little use of it by comparison with the other orders. However, an excellent example is the circular Choragic Monument of Lysicrates at Athens which was erected in the year 335 B.C., but the most notable of the Corinthian temples is that of Zeus, also at Athens, the construction of which was begun in the second century B.C. and was completed by the Emperor Hadrian in the second century A.D. The Greek Corinthian column, except for its distinctive capital, is similar to the Ionic, but is even more slender. Legend has it that the design of the beautiful capital, devised of Acanthus leaves, can be attributed to Callimachus, who was a Hellenistic Greek poet and critic. This is remarkable because his actual stock in trade was schoolteacher and library worker at Alexandria. The Romans made use of the Corinthian Order in many works of imperial architecture. They gave it a special base, made carved additions to the cornice and made various innovations in the capital with more flamboyant leafage than the Greek, and in some cases using human and animal figures. The Pantheon in Rome, built by Agrippa in the year 27 B.C., rebuilt by the Emperor Hadrian in the second century A.D. and now a Christian church, embodies the prevailing examples of this order.

Hailing back momentarily to the manner in which the volutes or scrolls of the Ionic order protrude from four corners, this configuration lent itself to the addition of the acanthus leaves of the Corinthian order and it was thus that the Romans devised the Composite Order as early as the first century A.D. However, it was not until the sixteenth century that the codifiers actually named it Composite. It has since been employed extensively in public buildings worldwide.

We, as freemasons, are accustomed to seeing the Ionic, Doric and Corinthian columns in a free standing situation representing Wisdom, Strength and Beauty alongside the pedestals of the principal officers, but it must be realized that columns in their normal situations as parts of buildings, as well as being aesthetically pleasing, perform the function of supporting the upper portions of the structure. These upper parts are called Entablatures and can take several forms. In a building such as the Temple of Apollo at Didyama, the long rectangular entablature is around all four sides, whereas in the Pantheon, a triangular portion is added at the front of the porch way or entrance. This triangular entablature is used where a raked roof is employed and is consistent with the roof line. Entablatures, like Columns, are divided into named parts, such as the Architrave, which is directly above the columns. The portion above the architrave is called the Frieze, usually ornately ornamented. Above the frieze is the Cornice. In the case of a triangular portion being used, it also has named parts. The Cornices completely surround the triangular facade, which is called the Pediment, the upper, angled cornices being referred to as Raking Cornices.

Apart from the Noble or Classical Orders, many adaptations and departures from orthodoxy can be observed when traveling around cities or the countryside. For instance, at the entrance to the Town Hall in Angaston, (a town north of Adelaide) there are two pillars which look like extended Australian Rules footballs topped with the volutes of the Ionic order. Also, many false columns which are really parts of the walls, display the characteristics of the capitals of all the orders.

It is also interesting to note columns or pillars derived from the architecture of countries other than Greece and Italy, such as Egypt. The sculptors of this country depicted many conventional designs inspired by such plants as palms, lotus and papyrus, mainly in the Ptolemaic period. The Egyptians and also the Greeks made use of Caryatids which are columns sculpted in the form of women. A wonderful example is to be viewed in the ruins of the Erechthion on the Acropolis in Athens, where the Caryatid columns are completely preserved. It is interesting to note that these figures are completely clothed, but the arms are terminated above the elbows.

Since completing this article, I have seen a television program showing a beautiful stock exchange building in the town of Ulan Bator in Mongolia. Inside the building are a large number of columns, unfluted and without bases, surmounted by Corinthian capitals. This is just another of many variations which have arisen from the Five Noble Orders.