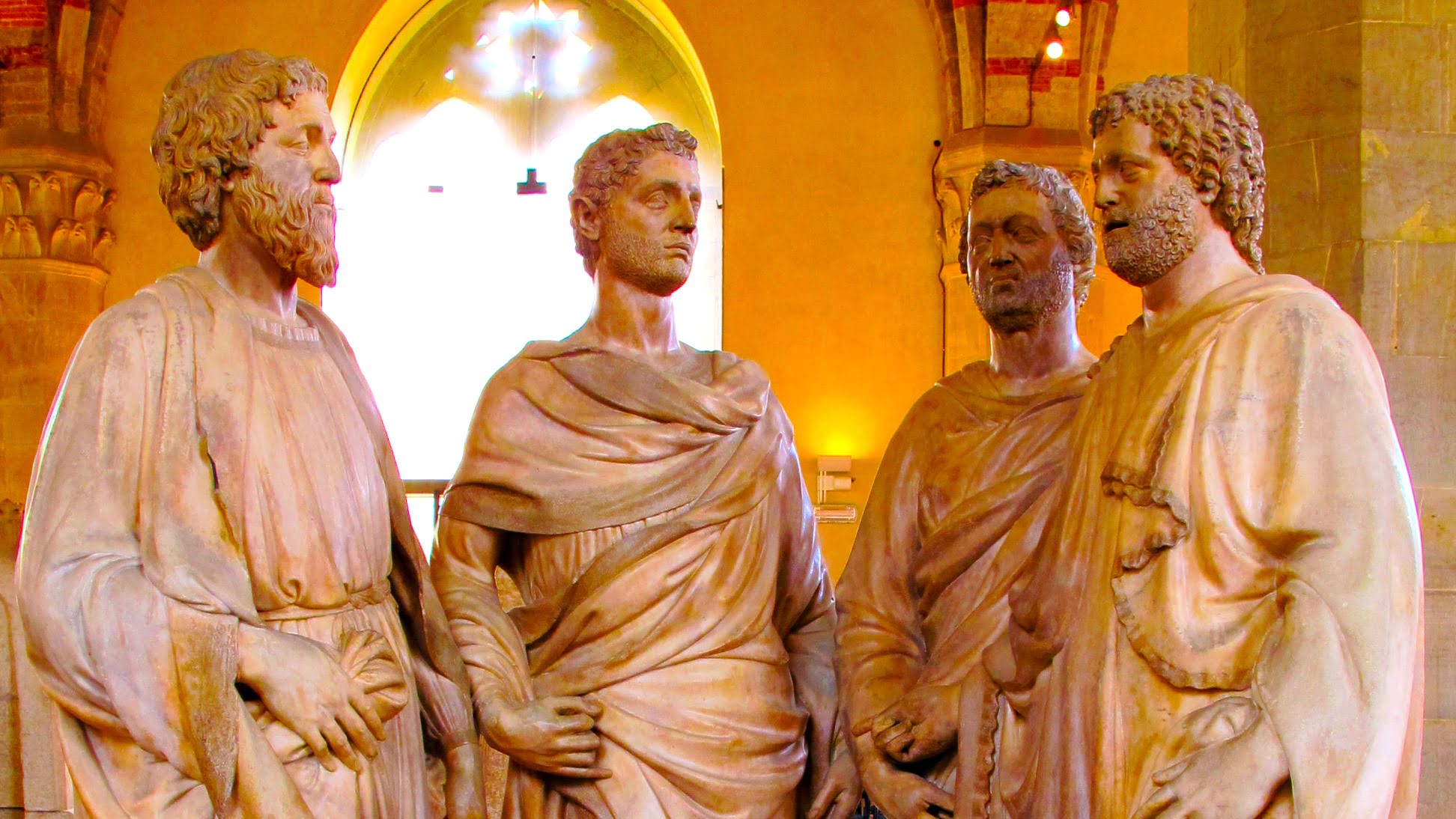 When in 298 A.D. the Emperor Diocletian was building his baths on the necks of the Quirinal and Virminal hills he included within its vast circuit a temple to AEsculapius, the god of health. He ordered the five sculptors, Claudius, Nicostratus, Sinforianus, Castorinus, and Simplicius to execute the decorative work and make the statue of AEsculapius.

Being Christians they refused to fashion the statue of a pagan god, and in consequence they were put to death on the 8th November, 298. Three were beheaded and two were scourged to death.

Other artists were found who executed the work for the Emperor. On the return of Diocletian to Rome in 300, finding the works completed, he issued an order for their dedication, and commanded that all the soldiers in Rome should be present, who, as they marched past, were to throw incense over the altar of AEsculapius. As soon as this command was propagated, four brothers, who were master masons, and held the position of Corniculari, or wing-leaders of the city militia, met to decide what they should do under the circumstances. These brothers were named Severus, Severianus, Carporferus, and Victorianus, who, besides being masons, had embraced the Christian faith. They all agreed to abstain from throwing the incense over the altar, it being against their principles to assist in anyway at pagan ceremonies of a religious nature. This determination they made known to their centurion, who communicated it to the tribune Lampadius, who reported the matter to Diocletian. The emperor ordered them either to sacrifice or suffer death. They, steadfast to their faith, suffered death by being scourged with leaden thongs. Their bodies were then enclosed in leaden cases and thrown into the river Tiber. A brother, Nicodemus, recovered their bodies from the river, and they were interred by the side of the five sculptors previously martyred, and other saints, in the catacombs on the Vaa Labricana, which from the four master masons are to this day known as the Catacombs of the Quattro Coronati. The five suffered on the 8th November, 298, and the four on the same day in 300, and their memory is still honored in the church of the Quattro Incoronati, on the Coelian Hill, in Rome. Bishop Damasus, 366-84, put up many inscriptions to the memory of the martyrs reposing in the catacombs.

In 625 Pope Honorius I. erected a handsome church, in the form of a basilica, to the memory of the four saints, out of the ruins of a temple of Diana, on the Coelian Hill. In the days of Pope Leo 1V., 848, the remains of many martyrs were translated from various catacombs to the churches in Rome. Those of the five sculptors, the four masons, and other  saints, to an oratory beneath the altar of the church erected on the Coeliau Hill. The four crowned brothers  were placed in two marble sarcophagi, and on either side, in two other sarcophagi, were deposited the remains of the five martyrs, whilst a very large sarcophagus, containing the relics of many others, was placed behind them. This is recorded in the inscription of Leo IV., in the church over the left stairs leading to the oratory.

With the remains was taken the Damasian inscription. This exists now, unfortunately, only in the introductory part, which does not refer to either the five or four. It is placed on the right hand stairs leading down to the oratory. During the dark and middle ages the Latin language underwent some curious changes in evolving the Italian, and it seems to me that the Italian title of these four mason saints, ” Incoronati,” is really a corruption of their military rank, “Corniculari”  which was brought back into the Latin from the Italian as Coronati.

Let us now turn our attention to the church itself. It stands on a lofty spur of the Coelian Hill, just within the line of the Servian wall, and like all early churches, faces to the east, the altar being at the West End. The exterior construction of the tribunal of Honorius is of good brickwork, classic remains being used for the purpose. From a quadri porticus one entered the noble church, a long nave with an elevated tribunal at the end. Fifteen columns, from Pagan temples, on either side formed the aisles, and supported the gallery above, for the nuns who were attached to the church.

The church was destroyed in the great fire of Robert Guiscard, in 1084, and restored by Pope Paschal II. in 1111. In these restorations a great change was made, the long nave was shortened by erecting a wall across it from the seventh column, through which an entry door Was made, so that part of the nave became an inner court; a wall being built between the columns” the aisles became part of the nunnery, and ten new columns were placed in the nave to form the aisles, so that the whole width of the present church represents the nave only of the o1d one.

The rebuilding of Paschal ii. is recorded in an inscription of the time, 1111, adjoining the inscription of Leo IV’s. Over the door of entry is a fresco by Mannozzi, representing the four saints amidst the clouds; the two central figures are dressed as Roman soldiers, whilst the two outside figures are in white robes ; all hold palms in their hands, the emblem of victory and martyrdom, and they have wreaths of bay (what the Romans call laurel we call bay) on their heads. On the left below a company of Augustine Sisters, and on the right (in looking at fresco), a group of novices are adoring the saints.

In 1198-1215 Pope Innocent III. built in the far right hand corner of the original Quadri Porticus, a chapel, which he dedicated to Saint Silvester, and which contains some curious early thirteenth frescoes, illustrating the principal events in that part of the life of Constantine, which he passed in Rome.

In 1624 Urban VIII. restored the church and in two inscriptions on the piers of the arch of the tribunal, refers to the inscriptions and work of Leo IY. and Pascal II.