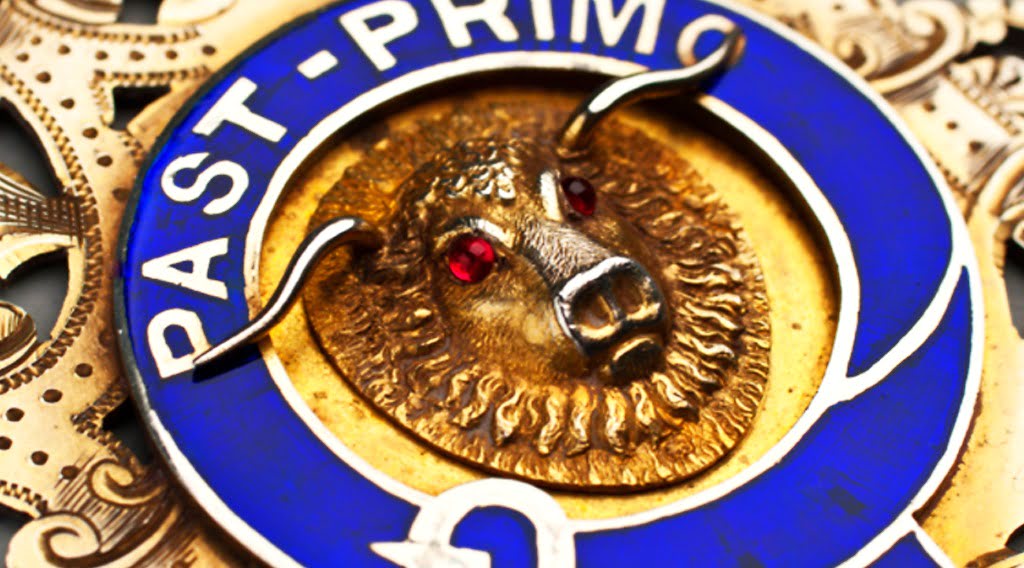 In so far as surviving records can prove, the earliest known traceable date of a Lodge of the Royal Antediluvian Order of Buffaloes is 1822 at the Harp Tavern, Great Russell Street near Drury Lane Theatre and was created by stage hands and theatre technicians who had been denied a long held privilege extended to them by the actors and artists of the day. An Order known as the City of Lushington existed in the late 1700’s to the 1800’s which consisted almost exclusively of actors or variety artists and held its meetings, mostly for entertainment and social recreation in the Inns and Taverns close to the well populated theatres of the day.

In order to be members of the Lushington’s one was required to be either an actor or artist who actually earned their living ‘treading the boards’. Selected guests of members were invited to attend these gatherings, and many stage hands obviously availed themselves of this privilege for a number of years. At some point in time not easily identified the Lushington’s became a ‘closed shop’ presumably because meeting rooms in the Inn or Tavern were not big enough to accommodate everyone (member and visitor alike). Whatever the reason the Lushington’s would only allow members to attend their meetings. The meeting room was organised in the form of a City with four or more wards and so the Master or chief officer was referred to as Mayor, and the senior officers were Aldermen. Lesser officers carried the prefix ‘City’ in their title, for example City Taster, City Barber, City Physician.

The City Taster had a most important roll in the evening’s proceedings. It was his duty before the Lodge opened to ceremoniously taste the ale on sale at the Inn. If it was found to be ‘wanting’ the host or landlord was ‘fined’ two gallons of ale which was consumed by all in attendance at the meeting without payment. You can imagine that there would be few occasions when the ale was not found wanting. Being prevented from attending meetings of the Lushington’s after a number of years enjoyment of that privilege, the stage hands and theatre staff starting holding their own exclusive meetings that had ’nuffin to do wit them acter fellas’. As the theatre staff moved around the country in pursuance of their profession, Lodges would have been founded in the various cities, towns and villages.

Pearce Egan, a well known London Theatre critic of the period attributes the founders as being Joseph Lisle, a well known eccentric and William Sinnett. In his book ‘The History of Tom and Jerry’ he cites one of the aims as being the promotion of an hitherto neglected ballad ‘We’ll chase the Buffalo’. It is a matter of pure conjecture as to what remarks may have been made by patrons in the public rooms of the Tavern upon hearing the song being sung by members in the club or concert room. Certainly the ballad was sung with a considerable amount of enthusiasm at R.A.O.B Lodge meetings as recently as the mid 1950’s by many of our more long serving members.

Why Antediluvian? The Order was founded in 1822, which certainly was not before the flood, and no satisfactory answer can be found in the records that have survived the ravages of time. We must remember that the bulk of our members at that time were involved in one of the theatre professions, and skilled orators would have written their own ceremonies, often designed to impress the unenlightened with the great antiquity of the Order. Similarities were deduced to the rights of bull worship at the time of the Pharaohs in ancient Egypt. The Knights of St. John of Jerusalem, and other nations of Christendom, Peter the Hermit and the Saracenic wars were also quoted. The desires of mankind to relieve the poverty of one’s fellow have been around since the earliest ages, and if that is not antediluvian, what is? Certainly the word has a better ring to it than ‘ancient’. So! Antediluvian we became!

As in Masonry the Seditious and Riotous Assembly Acts of the late 1800’s had a profound effect on Buffalo meetings, as it will have done on many clubs, societies and other bodies of the day. In order to show to the authorities that the Buffaloes were not subversive to the interest of the state, the Order decided to describe itself as the Loyal Order of Buffaloes. It only needs a slip of the tongue for ‘loyal’ to become ‘royal’ and in a very short time Joe Public accepted that the Order was indeed Royal.

A Royal Charter has never been issued to the Buffaloes. Indeed, under the current regulations it is unlikely that one will. Over the years there have been a number of internal differences of opinion leading to break away formations operating under the same principles and still using the name of the Buffaloes. These groups or ‘constitutions’ are generally referred to as Banners. The Royal Warrants Act requires the applicant to be the one and only representative body. The introduction of the Royal Warrant Act, in the early 1900s, required anyone using the ‘Royal’ prefix to register with the Lord Chancellor’s Office and to stop using the title if permission to continue doing so was not granted.

Since the Buffaloes had been using the title from the 1840s the Lord Chancellor agreed that no objection would be raised on the our continued use of the title on the grounds of long usage, provided no act by the Order arose which would disgrace its use. In the early days, the first lodge to be opened in an area became known as the Mother Lodge, from which subsequent Lodges would be opened. Advice was frequently sought from the ‘Mother’ Lodge in the interpretation of rule or other matters, although it would continue to be a private or Minor Lodge in its own right.

From these Mother Lodges the concept was developed for a body responsible for administration and organisation, alone. Thus we acquired Governing Authorities which became District Grand Lodges and latter Provincial Grand Lodges. 1n April 1866 the then known Lodges formulated a Grand Primo Lodge to control the movement, to set laws, to establish procedures and administration. This body later became known as the Grand Lodge of England.

The Order, today, is structured on similar Lodge to all Masonic Orders in that it is a three tiered system of Minor (Private) Lodges, Provincial Grand Lodges and Grand Lodge. The R.A.O.B. has four degrees of membership = First Degree, known as a Kangaroo (don’t ask why), Second Degree or Certified Primo, Third Degree or Knight Order of Merit and Fourth Degree or Roll of Honour. The Second Degree is awarded as result of a mixture of time, attendance and an examination on the ability to take the chair of a Lodge while third and fourth degrees based on length of membership and a proven attendance record. Provincial and Grand Lodge honours are not the gift of the Chief Officer of the Province or Grand Lodge. To gain such honour the member must have represented his Lodge as delegate to P.G.L. or represented his Province as a delegate to Grand Lodge, and again after length of service and attendance qualifications, he must have been elected by popular vote to the Office.

In the early days of the R.A.O.B. it is clear that there must have been members who were also members of the various Masonic Orders since there is much in R.A.O.B. ritual and regalia which can be identified as being Masonic in origin as well as from other societies. Today there are many who enjoy membership both as a Mason and as a Buffalo. Some holding quite senior and important positions of Office in both Orders The R.A.O.B. is a Philanthropic and Charitable body, Lodges and Provinces are at liberty to undertake whatever activity they consider appropriate for the needs of the community in which they work and live. Charitable funds exist at Lodge, Province and Grand Lodge levels to assist members of the Order and/or their dependants who are in necessitous circumstances.

Grand Lodge owns and operates two convalescent homes to provide rest and recuperation facilities for members, their wives or widows, recovering from illness or medical treatment The costs of running these two properties, as well as the benevolent grants for our aged and necessitous members or widows, and the education grants for dependant children are all funded from the Grand Lodge portion of the membership fees, voluntary donations and the proceeds from the investment portfolio. Much more can be said of the Royal Antediluvian Order of Buffaloes as operated by the Grand Lodge of England, but the foregoing is considered sufficient at this stage to give some insight into our activities. In doing so we hope to create a better under-standing of our Order. Our basic desire – Is to defend the weak, to help the unfortunate and render assistance to those in difficulty or need’. These honorable principles have existed in man since the earliest ages and in this respect our Order may be regarded as “ancient – or Antediluvian.”