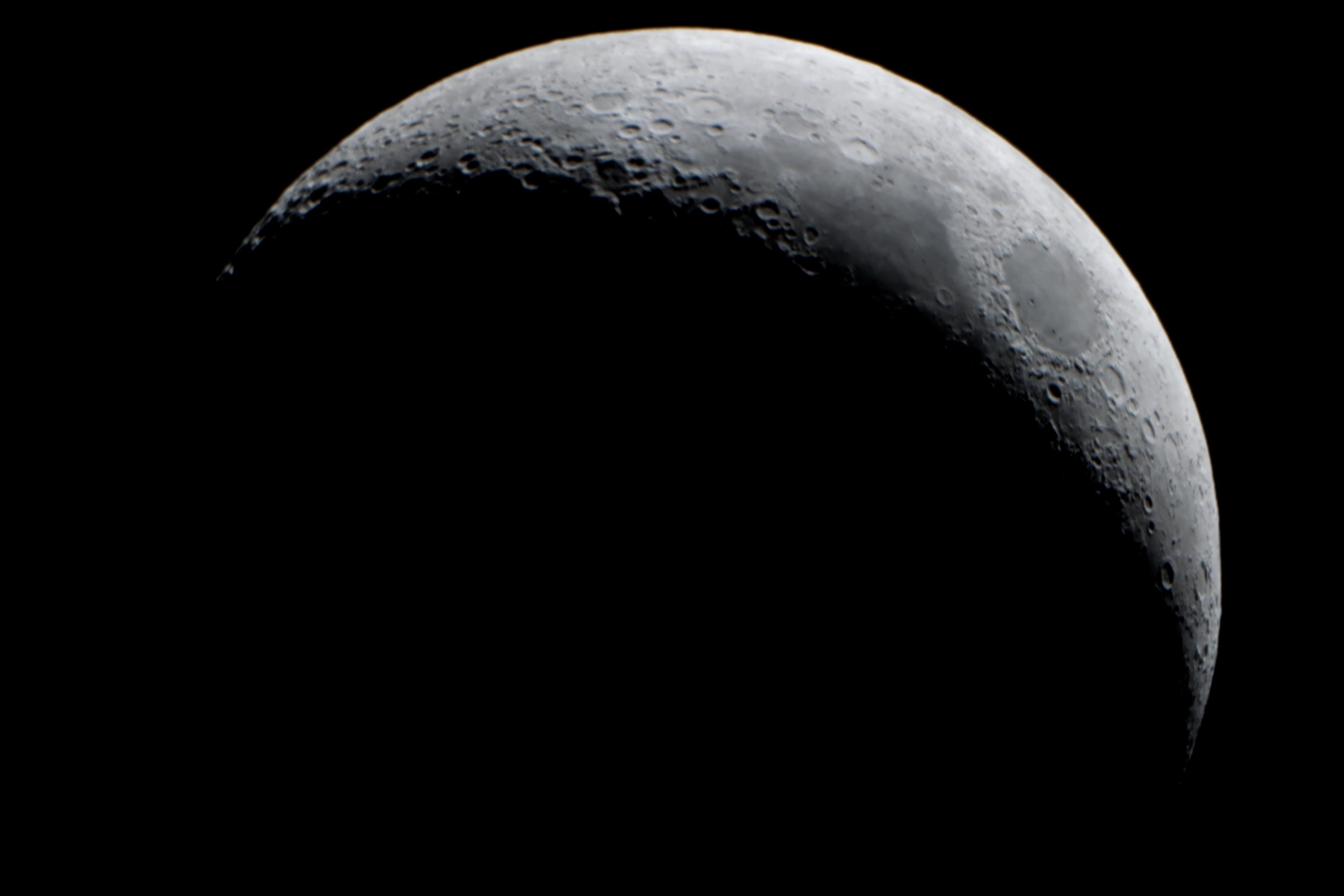 There is no more spectacular reminder of our Masonic historical and ritualistic heritage than the moon at its height of fullness. While astronomers view the moon with the analytical eye of science, the moon has been a focal point for cultures around the world throughout history and has inspired music, poetry and religion alike. However, for Masons, and particularly Vermont Masons, the moon has not just been a symbolic light in our ritualistic teaching but also a literal light to our brethren of long ago. It thus behooves us to take a moment to remember the moon and its long association with the Craft and its origins. Our direct Masonic tradition regarding the moon begins with the ancient Hebrews. In Genesis 1:14-19, we are told that on the fourth day of creation, “God made two great lights; the greater light to rule the day and the lesser light to rule the night.” Despite the specific prohibitions against lunar worship in Deuteronomy and the Book of Kings, the moon was still regarded as a strong symbol of permanence and regularity associated with its usage to measure the passage of time. In fact, the monthly offerings to the moon found in Numbers 28:11-15 are still read in some Jewish synagogues.

It is from the medieval European science of Alchemy that the first uses of the moon in the graphic and ritualistic manner that Masons are accustomed to derive their meaning. The Alchemists were a group of mystics who first appeared in the 12th century and were the forerunners of our modern chemists. They believed that with the proper mixture of chemicals and methods base metals such as iron and lead could be turned into gold and silver. Beyond this however, the Alchemists were true philosophers who used symbols and drawings extensively in their teachings and who insisted on strict secrecy from their initiates. Much of the graphic symbolism used in Masonry, such as images of the plumb, square, level, rough ashlar and perfect ashlar, was taken from Alchemical texts.

To the Alchemists, the moon was a symbol of the metal silver and was used to depict that substance in the obscure writings which transmitted their secret formulae. One of the most prevalent images used by the Alchemists was the stylized drawing of the sun and the moon with human faces. These images are now associated with the Masonic tracing boards of England and monitors of such American Masonic ritualists as Jeremy Cross, who lectured in the lodges of Vermont in 1815.

It is in the Craft Ritual and the structure of the Masonic lodge itself that we must bring together all of the foregoing elements to give a true picture of the use of the moon in Masonry. In modern American ritual the primary reference to the moon is as the second of the “Lesser lights,” of Masonry. This modern usage follows from the early 18th century English ritual reference to the Three lights of the Lodge being the “Sun, Moon and Master-Mason.” In addition to these “moveable lights,” there were also in these early English Lodge rooms three “fixed lights,” which are described by some Masonic historians as three windows in the lodge room “to light men to, at and from their work.” These three windows were later replaced with three candles located at the East, South and West corners of the lodge and situated before the Master, Junior Warden and Senior Warden, respectively. The reference to the Sun, Moon and Master of the Lodge as the three lesser lights of Masonry and their particular association with these three burning tapers and the associated officers was developed by the so-called Antient Grand Lodge which was active in England from the mid to late 18th century. The Antients, who apparently consisted of Mason hailing from Scotland and Ireland, were at odds with another faction of Masons in England, the so-called “Premier Grand Lodge.” The ritual of the Premier Grand Lodge only referred to three “great” lights without the Antients’ reference to the “lesser” lights. The fact that the Antients held to the above interpretation of the three lesser lights was particularly significant for American Masonry as was their use of deacons in their degree work, as we shall see.

In modern American Webb work ritual, the moon is referred to in the First Degree as one of the three lesser or moveable lights and is identified as the biblical ruler of the night and as a reference of regularity for the conduct of the Master of the Lodge. In the higher symbolism of the lodge, the moon has always been particularly identified with the Senior Warden in the West, thus following the Egyptian tradition associating the moon with this direction. This reference also corresponds to the recitation of the Senior Warden’s duties in the lodge (A t s i i t W a t c o t d…). Some Masonic philosophers have found this to be a fitting parallel for as the light of the moon is a mere reflection of the greater light of the sun, so the Senior Warden, the officer associated with the Doric pillar of Strength, is intended to be a reflection of the “light” of the Worshipful Master who is associated with the Ionic pillar of Wisdom. It is thus particularly significant that the messenger of the Senior Warden within the lodge is the Junior Deacon who, as his jewel, wears the square and compasses enclosing the moon.

There is one other strong association of the moon with Masonry which in many ways is more meaningful than all of the above. In the early eighteen hundreds when Masonry in Vermont was still a new venture, the Green Mountain State was a wild and unsettled place. It is difficult for us to imagine the thoughts and feelings of a nineteenth century Vermont Mason stepping into the bitter cold of a winter night after a lodge meeting to pursue his travel homeward. For him, a trip of several miles at night after a lodge meeting was a major undertaking where even the task of finding one’s way was formidable. For this reason, many of these early lodges in Vermont and other jurisdictions adopted the custom of holding their meetings during the week of the full moon. Hence, these lodges became referred to as “Moon Lodges.”

Following the phases of the moon was no trouble at all for the agrarian folk of the nineteenth and early twentieth centuries and the brilliant “lesser light,” provided a beacon that guided our elder brethren homeward along the dirt roads and beaten pathways of early Vermont. Thus, in 1817, 26 of the 40 lodges in Vermont were “moon Lodges,” with the bulk of the others being located in areas of higher population and presumably better lighting.

But alas, as with so many customs of old the advent of modern society and its technology has slowly driven the Moon Lodge to the status of a quaint anachronism. The invention of the automobile and street lighting together with the general decline of agriculture made the setting of lodge meetings by the the phases of the moon, rather than on a fixed day, a nuisance without purpose. Thus by 1979, of the 98 lodges working in the State of Vermont, only 8 still set their meetings by the phase of the moon. Hopefully, the few Moon Lodges left in Vermont will not surrender this old custom to base convenience. They serve as a reminder to modern Masons travelling home by the light of the moon that they are in essence following in the footsteps of their elder brethren for whom the moon was a real as well as symbolic light.

(Many years ago the MSA had a digest entitled “Moon Lodges.” It is now out of print but we thought an excerpt from the minutes of a “Moon Lodge” might be of interest. The following excerpt is also amusing and we hope you enjoy it!) –Editor–

Albion is one of the oldest towns in Idaho and in early days was a way station on the stage route from Kelton, Utah, to Boise. At the time Cassia Lodge was organized, its jurisdiction covered a wide territory extending from 80 to 100 miles in all directions. The members having to come such long distances by horseback or wagon, was the reason for setting the meeting Saturday nights on or before the full moon.

One of the lodge’s main social events each year in those early days was a dance or “Grand Ball.” One such affair took place on February 14, 1887, and must have been quite an event, judging from the following Committees appointed: Arrangements, 3 members; Music, 3 members; Floor Committee, 4 members; Invitations, 6 members; Reception, 12 members. Entire families came to these dances. One time, as a joke, someone changed the coats and blankets on all the babies present. Most of the mothers picked up what they thought was their bundle and did not discover the mistake until they got home, possibly as far as 30 miles away. They all had to come back to Albion and find out whose youngster they had; quite a mix-up.

One time there was a candidate for the M.M. degree who did not have his F.C. proficiency. Rather than have him go to a long distance home and wait till the next meeting, the members voted to waive the test and give him his M.M. degree that evening.

Another time, in the long ago, a member joined under an assumed name and after a regular Masonic trial, it was voted by the lodge that he must take all of the degrees over again under his right name.

It did not state in the minutes of that meeting if he had to pay the fees again.

Masonic Service Association of the U.S.

Freemasons from a lodge in Inverclyde donated £1,000 to women’s aid