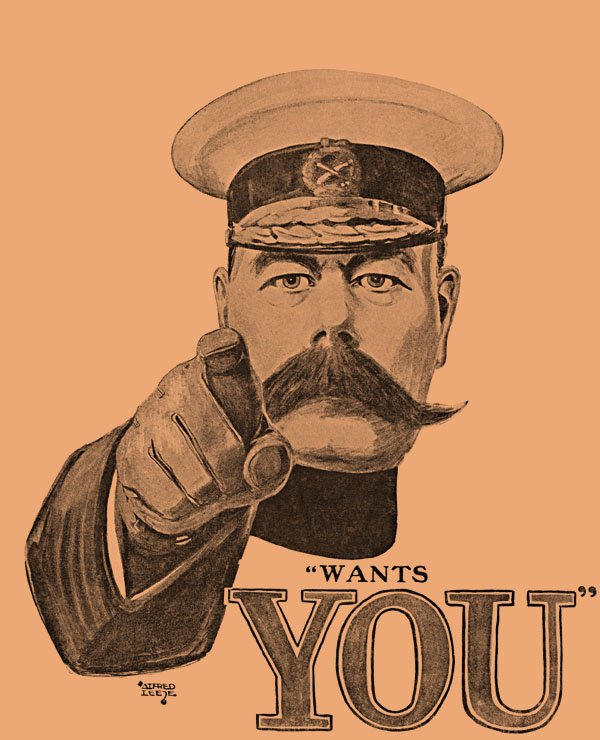 Born near Ballylongford, Kerry, Ireland, in 1899 Kitchener was appointed Governer General of Sudan and from 1902-09 he was Commander in Chief of India. Appointed Secretary of State for War in 1914, Lord Kitchener was lost at sea in the sinking of the British cruiser HMS Hampshire.

Of the many famous men who have been Freemasons, the first Earl Kitchener of Khartoum may be considered to have been the most active to patronise the Craft. In an extraordinary life, his onerous military commitment to his country was intertwined with the Masonic duties he pursued on behalf of the fraternity.

He belonged to 15 Lodges and Chapters whilst serving as District Grand Master of Egypt and the Sudan and of the Punjab in India. He was simultaneously Commander-in-Chief of the Egyptian Army and later in India, culminating in his appointment as Secretary of War before his untimely death in 1916. At the time he was holding active Masonic office.

Horatio Herbert Kitchener was born on 24 June 1850 near Ballylongford, Kerry, Ireland. Following in his father’s footsteps into the army, after varied posts he moved to Egypt in 1882.

Freemasonry was well established in the area, having been brought to Egypt in 1798 by Napoleon’s armies and quickly spread through the region. From the start, high-ranking French officers were active members, encouraged by Napoleon himself.

They introduced eminent and respected native soldiers and politicians that became the breeding ground for Kitchener to become a Freemason some 50years later. The Masonic legacy in Egypt was confused at best. French, Italian, English, Scottish and Irish jurisdictions worked at times together ­ and at times at loggerheads. The formation of the National Grand Lodge of Egypt in 1864, warranted by the Grand Orient of Italy, only gave temporary relief to the confusion.

Kitchener was 33 when he was initiated, almost certainly, in the Italian-speaking La Concordia Lodge No. 1226 in Cairo in 1883. Some doubt as to the Lodge at which he was initiated has arisen as a result of hand annotations in the records of the listing of Grand Officers in Grand Lodge in England.
The annotation states:

This error may have been brought about by Kitchener’s details in the petitioner’s warrant for the Drury Lane Lodge No. 2127 referred to below. La Concordia Lodge, consecrated with a group of other Lodges in 1868, was sadly erased in 1890 and there are no surviving records.

His initiation coincided with the increasing unrest in the Sudan and in 1895 the British government authorised Kitchener to launch a campaign to reconquer the territory.

It is quite extraordinary that during this period of tension and military activity Kitchener found time to develop his Masonic career.

In 1885 he joined the most senior Lodge in Egypt, Bulwer Lodge No. 1068. There are a number of questions raised about his membership, in 1886, regarding the first English Lodge with which he is associated. His name, as mentioned above, appears as a petitioner for the Drury Lane Lodge, consecrated on 25 January 1886. There is no evidence, however, of his presence in England at this time.

His name is clearly not in his own handwriting and the letters N/R (not registered) appear after the entry. The column headed `Initiated in Lodge No.’ has the entry 1355, the number of the Star of the East Lodge, also not in his writing. This error may have been the source for the confusion in the Grand Officers’ listing.
Kitchener became a joining member of the Star of the East Chapter in 1892 (which, founded in 1891, was only erased in 1966). Finally, at a meeting of the Lodge in 1898, the Master, Gerald Maxwell, welcomes Lord Kitchener as `The Victor of Omdurman’. Kitchener replies: `It gives me the greatest pleasure to meet the Brethren of the Lodge, which is the first one I have joined in England’.

All this evidence, in addition to the political unrest in Egypt at the time, points to his participation at the consecration of the Drury Lane Lodge in absentia. The Lodge also boasted the initiation of Capt. Robert Falcon Scott (of the Antarctic).

On 2 September 1898, General Kitchener led the British and Egyptian troops to victory over Sudanese tribesmen in the decisive battle of Omdurman, reoccupying Khartoum and establishing British control over the Sudan. It is here that he acquired the title of `Kitchener of Khartoum’.

Meanwhile, Kitchener continued with his vigorous Masonic activities. In 1890 he joined the Greek-speaking Hellas Lodge No. 1105, later named Grecia Lodge, and was instrumental in its revival when it began to work in English. He was Master in 1892.

It was also at this time that his interest in the Orders beyond the Craft began. His standing as a national hero, and his enthusiasm for the Craft, ensured his rapid rise through the Masonic ranks in all the Orders. In 1895 he was appointed Past District Senior Grand Warden for Egypt and the Sudan, and in this capacity he was instrumental in the Foundation of the Fatieh Lodge under the National Grand Lodge of Egypt and was made Honorary Master.

In the Mark Degree, he became Master of the Nubia Mark Lodge No. 511 in 1898. The Grand Lodge of Mark Master Masons of England also appointed him Grand Junior Warden of the District of North Africa in the same year. Kitchener was also made an honorary member of Lodge of Edinburgh, St Mary’s Chapel No. 1, Scottish Constitution.

In November 1899, Viscount Kitchener of Khartoum was appointed Governor-General of the Sudan and the first District Grand Master of Egypt and the Sudan. Under the new re-established jurisdiction, all previous agreements with local Grand Lodges were cancelled and four new Lodges founded. Three were active in Cairo (Bulwer, Grecia and Star of the East) and one in Alexandria (Zetland). Kitchener was involved in all three Cairo Lodges, where he resided.

On 16 December 1899, Field-Marshal Lord Roberts (an active Freemason) was appointed Commander-in-Chief of British Forces in South Africa and Major-General Lord Kitchener as chief-of-staff. On 13 March, British troops occupied Bloemfontein, and on 1 September, the British annexation of the Transvaal was announced and Roberts handed over his command to Kitchener and returned to Britain at the end of November 1900.

It will not be a surprise to hear that Kitchener found time to visit a Masonic Lodge during the Boer War. He was present at the English Constitution Rising Star Lodge No. 1022 meeting in Bloemfontein. The first meeting of the Lodge during the war was on 5 April 1900 following the British occupation of the town. The Cape Argus reported the meeting in their 18 April 1900 issue:

a communication was received from RW Bro Lord Kitchener… expressing his regret at not being able to attend the meeting… Intimating that it was (his) intention to visit the lodge in the near future.

Lord Kitchener attended the meeting on 23 April 1900 and signed a document, still in possession of the Lodge, proposing that a Royal Resolution be sent to the Prince of Wales concerning the health of Queen Victoria. Lord Roberts is also a signatory to this document. Kitchener’s overlapping popularity as a national hero and a dedicated Freemason is reflected on the occasion of his visit to Ipswich on 22 September 1902, just before his posting from South Africa to the Punjab in India. Invited to receive the freedom of the borough, Kitchener also accepted honorary membership in the British Union Lodge No. 114, Province of Suffolk, at an emergency meeting called by the enterprising Master, G W Horsfield.

The Lodge commissioned an 18-carat gold version of their Past Master’s jewel, adding a diamond five-pointed star mounted to the centre of the square and had it inscribed:

Presented to the Right Hon. The Viscount Kitchener GCB, GCMG, Past District Grand Master of Egypt and the Sudan, by the Worshipful Master, Wardens and Brethren of `British Union’ Lodge No. 114 September 22nd, 1902.

At the meeting in the town hall, in the presence of some 200 Brethren, headed by the Provincial Grand Master, the Earl of Stradbroke, and Sir Charles Dalrymple MP, Past Grand Master of Scotland and many more prominent Masons, Lord Kitchener graciously accepted honorary membership of the Lodge and the jewel, ending his speech:

In October 1902, Kitchener was posted to India as commander-in-chief of the army, where he remained from 1902 till 1909 and was almost immediately appointed District Grand Master of the Punjab. He began to practise what was by now a familiar pattern of active interest in Masonic affairs. In 1903 he joined Himalayan Brotherhood Lodge No. 459 in Simla.

In the same year he became the senior Founder Member of Kitchener Lodge No. 2998, the first of the many Lodges to which he was to give his name. In 1907 he attended a meeting of the namesake of his mother Lodge, Concordia No. 3102, in Calcutta and assisted at the initiation, passing and raising on the same day of His Majesty Habibullah Khan, the Amir of Afghanistan.

With the outbreak of the First World War, Kitchener was called home and the Prime Minister Herbert Asquith appointed him Secretary of State for War, the first time a military man had held the post. In spring 1916, Asquith posted Kitchener to Russia in an attempt to encourage the country to maintain the fight against Germany.
On 5 June, HMS Hampshire, on which Kitchener was sailing to Russia, struck a mine off the Orkneys. The British cruiser sank and Kitchener lost his life. It was a sad end to an amazing life. In a tribute in the Quarterly Communication of the United Grand Lodge of England on 7 June 1916, Deputy Grand Master Sir Thomas Halsey stated:

Brethren, we were all taken aback yesterday when the news arrived of the loss of our distinguished Brother and that great Englishman, Lord Kitchener… as Englishmen we owe him a debt of gratitude which can never be repaid; and England will hold his name in honour from now onwards, after all of us have passed away, into the remotest generations in the future history of our Country… Lord Kitchener sleeps in the proudest grave in which he could have been laid: in the sea, in one of our English ships, surrounded and supported by those who have so nobly upheld the name of England… Grand Lodge expresses its profound sorrow at the tragic and untimely death of RW Bro Field-Marshal Earl Kitchener of Khartoum and Aspall… The Craft mourns the loss of a distinguished Masonic administrator… (and) will ever hold in grateful regard and admiring reverence the fearless soldier and tireless organiser…

Fitting words to a great soldier and a great Freemason.