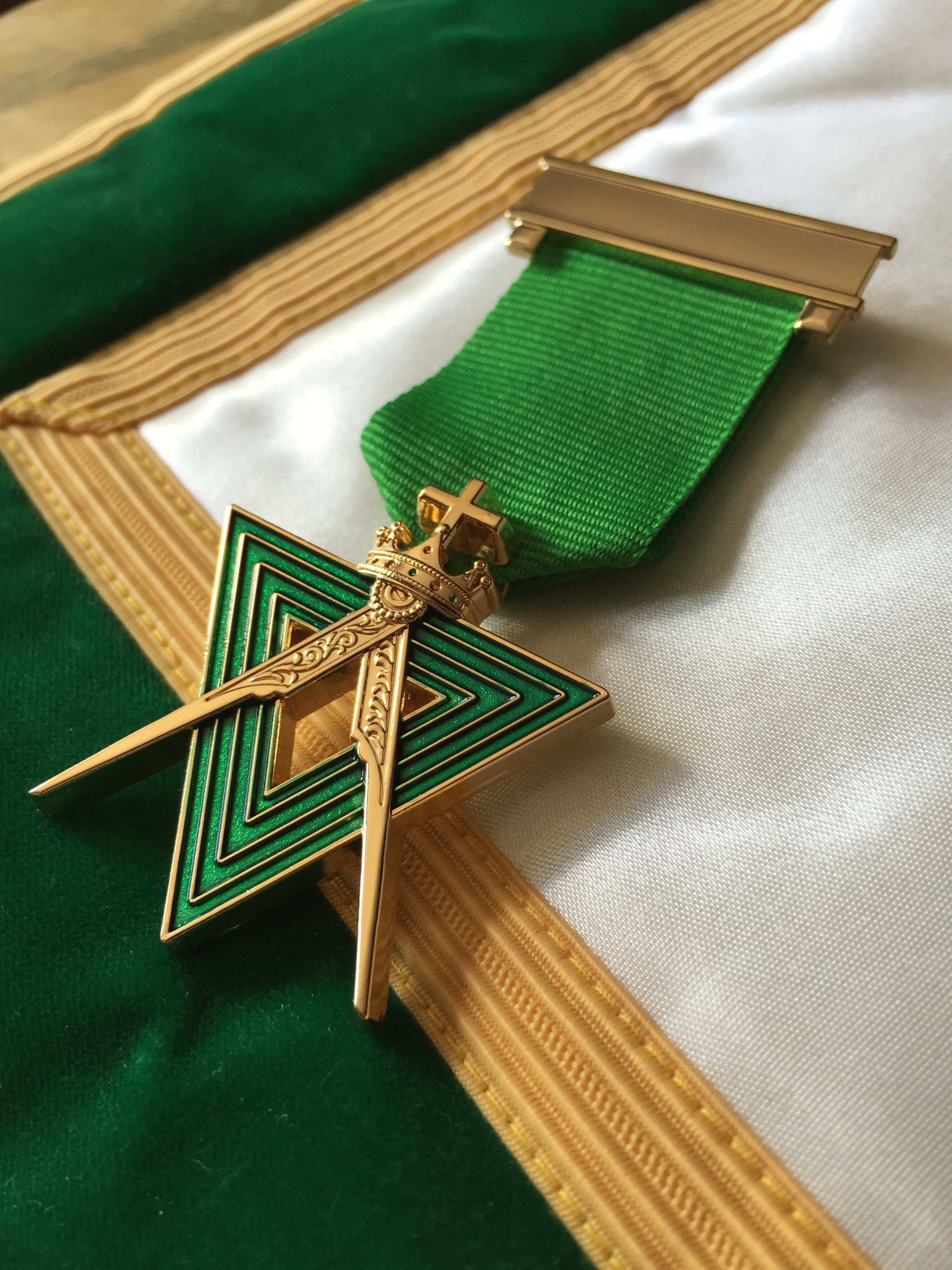 In the First of Two Articles, Matthew Christmas Considers the Order of the Allied Masonic Degrees

Of the many ‘extra-Craft’ degrees, those five controlled by the Grand Council of the Order of the Allied Masonic Degrees are probably the least known: one has to be a Mark Master and a Royal Arch Mason to be eligible and this double qualification will exclude many. There are also fewer private Allied Councils than there are lodges, or equivalent bodies, for the much larger orders of Mark and Royal Ark Mariners and even of smaller orders, such as the Royal and Select Masters.

The other aspect which can deter is that the degrees under Grand Council do not relate specifically to each other. Someone recently described them to me as “a bunch of rather secondary degrees which no-one else really wanted and which should have been allowed to die out”. He is not a member of this Order and could not be more wrong! While these degrees do not belong in a sequence, all five contain masonically significant elements, with two of them being of great ritual importance.

The Grand Lodge of the Antients, formed in 1751, allowed its lodges to work virtually any masonic degree. The rituals of this great variety of degrees were not in any sense uniform. In the remoter parts of England, not least Lancashire and Yorkshire, in towns like Newcastle and Rochdale and in villages such as Bottoms, particular variations seem to have emerged; ports such as Bristol and Plymouth also developed their own unique workings, as Bristol’s impressive Camp of Baldwyn still testifies, practising inter alia degrees which are now conferred nowhere else. Furthermore, many of the earliest travelling military lodges were warranted by the Antients and facilitated the spread of what we consider the ‘additional’ degrees both to and from the continent and America. The latter years of the Eighteenth Century and the first half of the Nineteenth were masonically rich, but utterly chaotic. However, regular organisation of the many degrees soon commenced.

In 1791 the Knights Templar came together and in 1793 Thomas Dunckerley also organised the degree of Royal Ark Mariner, although in 1871 it came under the permanent supervision of the Mark. 1813 at last saw the unification of the Antients and the Moderns (the premier Grand Lodge of 1717) into the United Grand Lodge and in 1817 Supreme Grand Chapter was established to rule over the Royal Arch. In 1845 the Supreme Council 33º was constituted, 1856 saw the formation of the Grand Mark Lodge and the Grand Council of Royal and Select Masters was warranted in 1873.

The degrees of the Allied came together and underwent a variety of reorganisations, not least with respect to the Order of Holy Wisdom (Holy Royal Arch Knight Templar Priests). From 1879/1880 the Grand Council of the AMD formally came into being, at first controlling just four degrees. The new Grand Council’s purpose was twofold: to regularise what those involved at the time regarded as significant degrees outside the nationally recognised bodies, as well as to prevent the spread of those seen as less worthy. Today, the Order of the Allied Masonic Degrees controls five degrees in over 150 councils all over the world.

While candidates can take four of the degrees in any order – there really is no connection between them, nor any sense of philosophical progression one to another, each being complete and discreet – the first degree has to be that of St Lawrence the Martyr. It is in this degree that all business of an Allied Council is conducted and it is from a Lodge of St Lawrence that a Board of Installed Masters qualifies the Master to rule over all five degrees.

St Lawrence became of importance in Christendom after Philip II of Spain won his great battle of St Quentin against the French on 10th August 1557, the saint’s feast day. In gratitude he named his new palace-monastery, built near Madrid in the very centre of Spain, El Escorial. This translates as ‘the Place of Ashes’ in reverent allusion to St Lawrence’s martyrdom, with the gridiron, his symbol, everywhere displayed. The gridiron, not surprisingly, is the jewel of the masonic degree.

However, whilst the central character of the degree’s lecture is an early Christian saint, this is not a Christian Degree in any sense. The Allied Degrees are open to masons of all faiths. Prayers are offered to the Great Disposer of All and the Volume of Sacred Law is opened at the Old Testament. St Lawrence is honoured for his example, not for his specific beliefs: the degree teaches fortitude and humility.

What is really important about St Lawrence the Martyr is its possible link with our operative predecessors. Some form of this degree has been worked in England for over 200 years, principally in Yorkshire and Lancashire. While claims made by some that it has medieval origins are currently unsubstantiated, it may well be that the present version is a perpetuation of an operative degree.

The full title of this degree is Grand Tilers of Solomon, or Masons Elect of Twenty- Seven. The provenance of the degree is clearly established from the USA, hence the American spelling of Tyler. It did not join the Allied Degrees until 1893 when it was conferred on the then Grand Master, the Earl of Euston. It is very similar in character to the Select Master degree of the Cryptic series and relates the legend of the accidental intrusion of a mason into the Vault beneath the Temple. The central characters represent Solomon, Hiram and Hiram Abif. The jewel’s ribbon is adorned with their crowns and a dagger held to strike, characteristic of the ceremony.

This degree also has much in common with the degree of Intimate Secretary, the 6° of the Ancient and Accepted Rite. For reasons of this similarity to other degrees, the Grand Tilers of Solomon has often been rather overlooked. However, the degree in its Allied form specifically teaches the mason admitted a Grand Tiler not to judge hastily of a man’s motives, nor to blame others for his own carelessness, as well as to acknowledge his own mistakes and accept the consequences. In addition, one might well profitably speculate at a deeper meaning for the preservation of three such similar ceremonies. These ‘tyling’ degrees may well emphasise the importance of preventing those involved in mystical as well as the need properly to prepare the candidate before embarking on an initiation ritual.

All too frequently, one hears talk of ‘Side Degrees’. In addition to the questionable suggestion that these are somewhat less significant than the Craft, the description is simply wrong for these ‘additional’ degrees. However, the Knights of Constantinople is a genuine side-degree in that it was originally conferred by one brother taking another aside, probably after a meeting in another degree. Its origin is uncertain, but the emphasis in its ritual on the equality of all men before God suggests an origin in the North of England, before it appeared in America, via Scotland, where it was being worked by 1830. Like St Lawrence the Martyr, the operative flavour is also clear. Set in the courtyard of the palace of the Roman Emperor Constantine in the Fourth Century AD, the degree is somewhat quirky, quite humorous and can be noisy! Some masons find it rather silly and therefore see it as rather trivial, but many others appreciate the serious message as to humility which it contains: that true greatness is not to be found in rank and fortune, but rather in nobility of character and in a willingness to acknowledge that in others of whatever station in life. It is not who a man is, but what he does that is important. How ironic that masons of all people need to be constantly reminded of that most simple message.

Matthew Christmas joined the Order of the Allied Masonic Degrees in Rose and Lily Council No. 15 in 1993. He is currently a member of Dinas Council No. 140 in the Severn District. The next article will examine the two remaining Allied Degrees, the Red Cross of Babylon and the Holy Order of Grand High Priest.

In the nineteenth century Plymouth was the headquarters of the Sovereign Grand Council of the Knights of Constantinople under the direction of a Secretary General. This was, and remains for members of the three Plymouth Councils, a Christian Order. In 1910 they became part of the Allied Masonic Degrees but on the condition that members retained their distinctive regalia and their Christian Degrees. They are the only Councils which retain aprons.