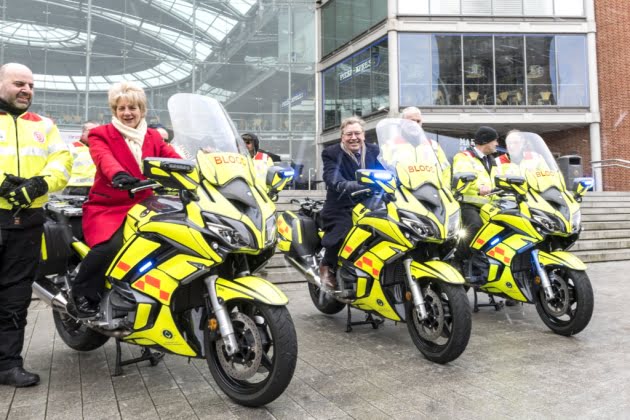 Norfolk Freemasons have donated three motorbikes to a charity that provides a vital service of transporting blood to people in need outside of normal working hours.

It followed an appeal that was launched in May last year by Norfolk Freemasons, with the aim of raising enough money to buy one new bike for SERV during the next 12 months.

Nine months later, they presented SERV with not one, but three motorcycles which SERV volunteers will now use to transport blood, plasma, platelets, samples, vaccines, donor breast milk and other urgently required medical items to hospitals and the East Anglian Air Ambulance at night, daytime weekends and bank holidays.

Stephen Allen, Provincial Grand Master of Norfolk Freemasons, said: “I launched an appeal at our annual meeting in May, at which members from all our 76 lodges meeting at 22 different Masonic centres in the city, towns and villages across Norfolk were present, with the aim to providing SERV with a new bike by Christmas

“What proved so heart warming was the generous spirit with which our members responded, it really struck a cord. We did manage to get a bike by Christmas; it was purchased with funds raised by the Great Yarmouth Lodges and has been seeing active service for the past two months.”

He said: “Our costs are approximately £3,400 per month and this is raised from donations, fundraising events and the generosity of charitable organisations such as the Freemasons of Norfolk, the Lions, Rotary International, Norwich Inns and various groups who made us their charity of the year.”

The Dean of Norwich, the Very Rev Jane Hedges, performed a blessing during the presentation and handed the bikes over.

SERV name all their bikes, and the three new ones are called Faith, Hope and Charity.