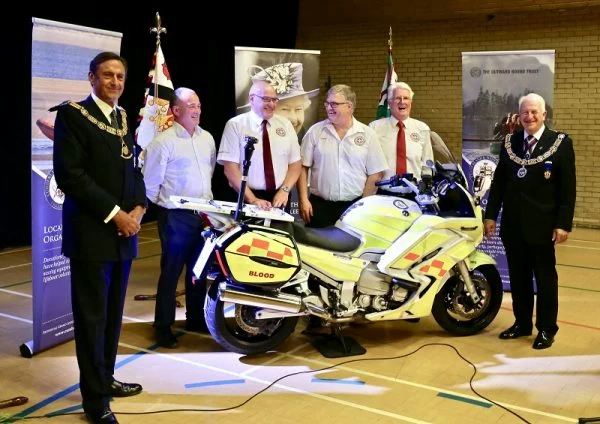 At an event to be held in Cleator Moor Civic Hall & Masonic Centre, on Saturday, 26th January, 2019, “Blood Bikes Cumbria” will receive a brand new, fully liveried, Yamaha FJR1300A motorcycle, bought and paid for by the Freemasons of the Province of Cumberland & Westmorland.

The principal guest at this presentation will be the High Sheriff of Cumbria, Mr Simon Berry, and he will be accompanied by a number of other high profile local dignitaries, including Mrs Trudy Harrison MP for Copeland, Mr Mike Starkey Mayor of Copeland, Mr Nick Ford Chair of Cleator Moor Town Council, Mr David Farrell Chairman of Cleator Moor Chamber of Trade and Anne Marie Moffat Chairperson of “Blood Bikes Cumbria”. In addition, there will be over 150 people, both masons and non-masons in attendance supporting this occasion.

Following a short reception, the presentation will take place when the Provincial Grand Master William Bewley, will hand over the keys of the motorcycle to the High Sheriff, who in turn and on behalf of the Freemasons of Cumberland & Westmorland, will officially present them to Anne-Marie Moffat Chairperson of “Blood Bikes Cumbria”.

This will be the fourth motorcycle donated by the Freemasons of the Province to the Blood Bike Charities which cover Cumbria and surrounding districts. The first was presented at Kendal Leisure Centre in September 2017 to “Blood Bikes Cumbria” at the Tercentenary Celebrations of Freemasonry. The second was presented in May 2018 to the “North West Blood Bikes Lancs & Lakes” at the Provincial AGM in Carlisle.   The third motorcycle was presented at Kendal Masonic Hall in July 2018, and was dedicated to the memory of the late Russell Curwen, a rider for “North West Blood Bikes Lancs & Lakes”, who was tragically killed whilst on duty.

In striving to support the local community at large, the Blood Bike Charity has become close to the hearts of all Freemasons, who recognise the commitment and devotion of their volunteer riders, whose unselfish dedication has saved countless lives, helping the sick and infirm.

Each motorcycle costs on average £18,000 and the Freemasons of the Province of Cumberland & Westmorland are all extremely proud to be able to support this very worthwhile and much-needed cause.