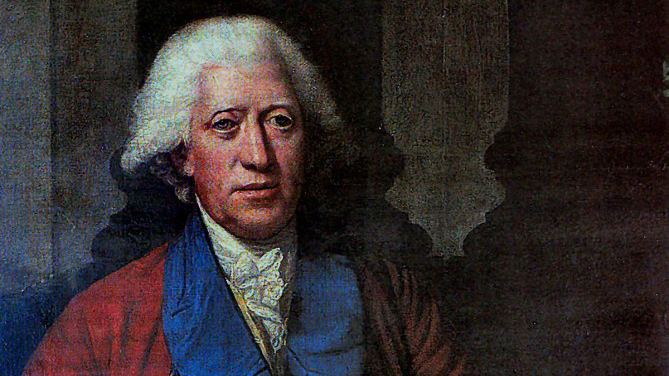 No one, among the Masons of England occupied a more distinguished position or played a more important part in the labours of the Craft during the latter part of the 18th. century than Thomas Dunkerley, whose private life was as romantic as his Masonic was honourable.

Thomas Dunkerley was born in the city of London on the 23rd. of October, 1724. He was the reputed son of Mr. — ? — and Mrs. Mary Dunkerley, but really owed his birth to a person of much higher rank in life, being the natural son of the Prince of Wales, afterwards King George II., to whom he bore, as his portrait shows, a striking resemblance. It was not until after his mother’s death that he became acquainted with the true story of his birth; so that for more than half of his life this son of a King occupied a very lowly position on the stage of life.

At the age of ten he entered the Navy, and continued in the service for 26 years, acquiring by his intelligence and uniformly good conduct, the esteem and commendation of all his commanders. But having no personal or family interest, he attained no higher rank than that of Gunner. During all this time, except for brief intervals, he was absent from England on foreign service.

He returned to England in January, 1760, to find that his mother had died a few years before, and that on her death-bed she had made a solemn declaration, accompanied by such details as left no possible doubt of it’s truth, that Thomas was the illegitimate son of King George II., born while he was Prince of Wales. The fact of the birth had, however, never been communicated by the Mother to the Prince, and George II. Died without knowing that he had such a son living.

Dunkerley, in the account of the affair which he left among his posthumous papers, says : “This information gave me great surprise and much uneasiness; and as I was obliged to return immediately to my duty on board the Vanguard, I made it known to no person at that time other than Capt. Swanton. We were then bound a second time to Quebec, and Capt. Swanton promised that on our return he would try to have me introduced to the King, and that he would give me a character reference, but when we came back to England the King was dead.”

Dunkerley had hoped that his case would have been laid before his royal father, and that the result would have been an appointment equal to his birth. But the frustration of these hopes by the death of the King seems to have discouraged him, and no efforts appear for some time to have been made by him or his friends to communicate the facts to King George III., who had succeeded to the throne.

In 1761 he again left England as a Gunner in Lord Anson’s fleet, and did not return until 1764, at which time, finding himself heavily in debt, incurred in the expenses of his family, ( for he had married early in life – 1764), knowing no-one who could authenticate the story of his birth, and seeing no likelihood of gaining access to the King, he sailed in a merchant vessel for the Mediterranean. He had previously been granted a pension in the Navy for his long services, the principal part of which he left for his family during his absence.

But the romantic story of his birth began to be publicly known and talked about, and in 1766 attracted the attention of several people of distinction, who endeavored, but without success, to excite the interest of the Princess Dowager of Wales on his behalf.

In 1767, however, the declaration of his mother was laid before King George III., the grandson of Dunkerley’s father. It made an impression on him, and inquiry into his previous character having proved satisfactory, on May 7th., 1767, the King ordered Dunkerley to receive a pension of 100 Pounds , which was later increased to 800 Pounds, together with a suite of apartments in Hampton Court Palace. He also received and was permitted to bear, the Royal Arms, and adopted as his motto the appropriate words “Fato non Merito”. In his correspondence he used the name of “FitzGeorge”( son of George ).

In 1770 he studied Law, and in 1774 was called to the Bar; but his fondness for an active life prevented him from ever making much progress in the legal profession.

Dunkerley died at Portsmouth in 1795, at the ripe old age of seventy one.

The Masonic career of Thomas Dunkerley , if less remarkable than his domestic life, is more interesting to the Freemason. There is no record of his initiation into the Order; but it must have been not long before 1757, as in that year he delivered an address, as we should now call it, before the Lodges of Plymouth, which was published at the time under the title of “The Light and Truth of Freemasonry Explained, being the Substance of a Charge Delivered at Plymouth in 1757.” In the title of this production he styles himself simply a ‘Master Mason’, showing that he had not been long enough in the Order to have obtained an official position, and in the body of the charge he apologizes for the apparent presumption of one “ who had been so few years a Mason “.

He was probably initiated about 1755, and, as he was at that time in the Navy, in one of the Lodges of Plymouth. In this address, it is worthy of note, that a prayer, written by Dunkerley, appears for the first time, which, slightly abridged, has ever since been used in all English and American Lodges at the initiation of a candidate.

Shortly after his return to England he was elected Master of a Lodge. This must have been in the year 1766 or 1767; for in the latter year he received from the Grand Master, the deputation for Provincial Grand Master of Hampshire, which, would be unlikely if he were not an installed Master. Preston speaks of his ‘indefatigable assiduity’ in the discharge of the duties of the office, and of the considerable progress of Masonry in the province through his efforts. He was soon appointed to the superintendency of the lodges of a further five counties. Some years afterwards, he was conferred with the rank of Past Senior Grand Warden. During the rest of his life Dunkerley received many evidences of the high esteem in which he was held by the Craft. At the time of his death he occupied numerous prominent positions in Masonry.

But far higher than any of these titles and offices, and of far more lasting importance to the Craft, was the position occupied by Dunkerley as an instructor of the Lodges, and a reformer, or at least a remodeller, of the system of lectures. To these duties he was called by the Grand Lodge of England, which authorised him to construct a new code of lectures, a careful revision of the existing ritual, and a collation of all ancient formulas.

For this task, he was eminently qualified. Possessed of a fair share of learning, and imbued with a philosophical spirit, he was prepared to amplify the existing system by the addition of much new symbolism, and the improvement of that which had already been introduced by his predecessors. He was also liberal in his views, and not affected by the prejudices against what were called the innovations of Dermott (The Ancients ), he did not hesitate to avail himself of Dermott’s ideas, just as that Schismatic had not hesitated to profit by the suggestions of the Chevalier Ramsey. Dunkerley often visited the Lodges of the Ancients, for the purpose of ascertaining what were the essential differences between the two systems, and of that which was good he culled the best and transplanted it into the workings of the Legitimate Grand Lodge (the Moderns ). The results were not a fleeting variation but are evident even in the ritual of today. The most important being that which affected the Third degree. Dunkerley reconstructed the Royal Arch and introduced into the Grand Lodge of England; not, however, without opposition.

By this innovation, the true Word, which had previously been a part of the M.M. degree was transferred to the Royal Arch and the Third degree was made incomplete and required to be supplemented by a higher one.

The M.M. degree, as now given in England and America differs considerably from that previously used, and is indebted for it’s present organisation to the labours of Dunkerley. He also introduced into his revised system of lectures some new symbols. Thus to him is ascribed the adoption of the ‘Parallel Lines’, as a symbol of the two Saints John, and the ‘Theological or Jacob’s Ladder’. Dunkerley wrote nothing of great importance, his contributions to Masonic Literature were confined to a couple of addresses given in 1757 and 1769.

In an organisation where so little of the early records have survived down the years to the present day, and where much of it’s history is veiled in mystery, symbolism and allegory, we owe much to those quiet researchers who toil away in dusty archives looking for the smallest pieces of the Masonic jigsaw.

While tonight’s story may excite interest due to the circumstances of Dunkerley’s birth, surely the more significant detail relates to the origin of the prayer in the First Degree, the Parallel Lines and the format of the Third Degree as we know it.

This Particular address was drawn from the pages of Mackey’s Encyclopedia of Freemasonry, printed around 1917 or earlier. There are a number of copies around, and like most encyclopedia’s is not set out for a good read, but is the usual “alphabetically arrangement of articles” all with a relationship to Freemasonry – some long many quite short.