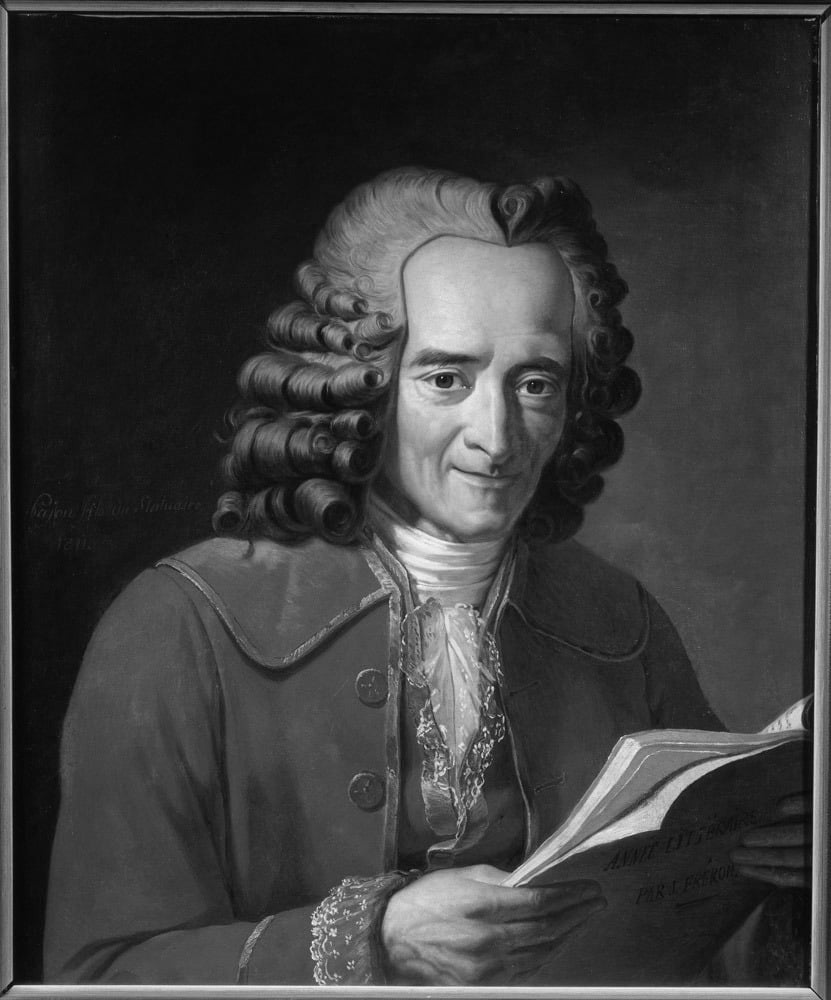 French philosopher and writer initiated into Freemasonry in 1778 in the Lodge of nine sisters in Paris.

His full name was Jean Frangois Marie Arouet de Voltaire. This French philosopher, historian, dramatist, and man of letters adopted the name of Franois Marie Arouet de Voltaire though only the first words were his by baptism, the father, a notary, being Franois Arouet. Whence the name of Voltaire was derived has been the cause of many perplexing speculations. One of the most famous of French writers, he was born at Chtenay, near Sceaux, November 21, 1694. His early life was loose and varied.

In 1728 he became infatuated with a Madame du Chatelet his literary works cover some ninety volumes. In 1743, the French government despatched him on a mission to Frederick the Great, by whom he was held in high favor, and in 1750, at the request of the King, he made his residence in Berlin, but five years later they quarreled, and Voltaire moved to Ferney, Switzerland. His literary talent was most varied, and in invective he had no equal. During his exile in England he imbibed deistical theories, which marked his life.

He was charged with atheism. Voltaire was easily misunderstood. While he attacked the fashionable atheism of his time, as well as Christianity, his real fight, broadly slashing as it was, and never any too courteously outlined or defined, was probably against all persecution and oppression by any and all pampered orthodoxy. He was initiated in the Lodge of the Nine Sisters, at Paris, April 7, 1778.

Voltaire was an author, a playwright, a philosopher and a satirical writer. He was a man who dared to do what he thought was right; and though he did not court favor from any one, he was conscious of the danger he was running, which is evidenced by the location of his home, at Ferney, near the border line between France and Switzerland, that he might readily escape from one country to the other.

His enemies were the holy fathers. They called him an atheist; proclaimed it from their holy places until it came to be generally accepted as the truth. Voltaire was a protector of Protestants, and spent his money freely in that cause: this alone was enough to incite the hatred of the holy fathers. They raised objection to his burial in the parish where he died, and his remains were conveyed to the Abbey of Scellieres, belonging to one of his nephews, where they were interred. On the stone his friends were permitted to place the words “Ci-git Voltaire” (Here lies Voltaire). The holy fathers even interrupted the Masonic services, being held in private (if not secret), described in that splendid work “Une loge Masonique d’avant 1789.”

He began to write verses before he was twelve years of age, his verses landing ready sales. His Jesuit teachers quickly discovered his talent (in the college of Louis le Grand) and one of them predicted that he would become the “corpheus of deism.” His satirical and witty pamphlets caused his arrest and subsequent confinement in the Bastile, just after the death of Louis XIV, though he was barely twenty years of age at the time. He was in prison a year, during which time he wrote his epic on the Henriade, and completed a tragedy he had in hand, when the regent, pleased with these performances, released him.

Voltaire was almost as prolific a writer as Charles Dickens, but his satire was more keen. His verses on Louis XIV and Madame Pompadour were among the most daring. Among his principal works were “Histoire de Charles,” “Roi de Suede,” “he Temple du Gout,” “Seven Discours sur l’homme,” “Les Dictionaires Philosophique,” “Histoire du Parlement” and “Histoire de l’establissement du Christianismea.”

Forty-eight of his works have been translated into English. Not an atheistic word can be found in one of them, but it is plain that Brother Voltaire was a Deist. The accusation of atheism originated with the priests, is boomed by the priests and others who have not taken the trouble to inform themselves. When a man goes out into the highway and cries “Mad dog!” he jeopardizes the life of every dog in sight, and he will soon have a crowd repeating his cry. So it has been with Voltaire.