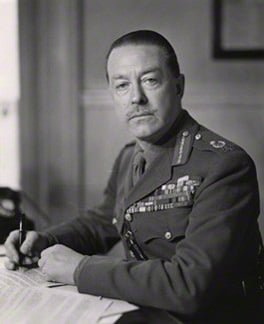 The British field marshal Harold Rupert Leofric George Alexander, 1st Earl Alexander of Tunis (1891-1969), was the supreme Allied commander of the Mediterranean theater in World War II. He was governor general of Canada from 1946 to 1952 and British minister of defense from 1952 to 1954.

Harold Alexander was born in Northern Ireland on December 10, 1891, the third son of the 4th Earl of Caledon and of Lady Elizabeth Graham Toler, daughter of the 3d Earl of Norbury. Educated at Harrow and Sandhurst, Alexander served in the British army with distinction in France during World War I. Wounded three times and mentioned in dispatches five times for gallantry in action, he received the Distinguished Service Order and the Military Cross.

Following graduation from the Staff College and the Imperial Defence College, he saw combat in India in 1935 and was again mentioned in dispatches. He served in various staff and command positions, and as a major general he commanded the 1st Division at the outbreak of World War II. The division went to France in 1939 as part of the British Expeditionary Force. When the German blitzkrieg of May 1940 forced France to surrender, Alexander, then a lieutenant general and commander of the I Corps, directed the evacuation of British and French troops from Dunkirk.

Alexander became a full general and took command of the British army forces in Burma in March 1942. He successfully carried out a difficult withdrawal to India, where the British, soon reinforced by American troops, prepared for offensive operations in Southeast Asia.

In August 1942 Alexander was assigned to take command of the British Middle East forces. He defeated Field Marshal Rommel’s Italo-German army at Alam Halfa in late August and early September. On October 23 in the Battle of EI Alamein, Alexander launched an offensive that precipitated a German and Italian retreat of 1,500 miles across Libya to southern Tunisia with the British in pursuit.

Meanwhile, Anglo-American forces under the supreme Allied commander Dwight D. Eisenhower had landed in French Northwest Africa on November 8, 1942, and together with French forces moved into Tunisia. On February 19, 1943, at the height of an American disaster inflicted by Rommel at Kasserine Pass, Alexander became Eisenhower’s deputy and commander of the 18th Army Group. Alexander took command of all the Allied ground forces. They expelled the Germans and Italians from Tunisia in May 1943 and cleared the entire North African shore of Axis troops.

As commander of the 15th Army Group, Alexander directed the Allied invasion of Sicily in July 1943 and the subsequent ground operations, which included General Bernard Montgomery’s British 8th Army and General George Patton’s U.S. 7th Army. Alexander’s leadership was largely responsible for the conquest of the island in 38 days.

Alexander then played an important role in the secret negotiations leading to the surrender of Italy. He headed the ground forces that invaded southern Italy in September 1943 and directed Montgomery’s 8th Army in the eastern part of the country and General Mark Clark’s U.S. 5th Army west of the Apennines. Alexander coordinated the capture of Naples and the Foggia airfields by October 1, 1943.

Then he began what turned out to be a grueling advance toward Rome. Through tangled, easily defended terrain, in the face of incredible difficulties, and against tenacious German opposition, Alexander engineered the Allied progress to the Gustav Line in the Cassino area. Attempting to go around the resistance, he executed the Anzio amphibious landing on January 22, 1944. It failed to dislodge the Germans from the Gustav Line or from Rome. As a consequence, battles at Cassino and Monte Cassino were fought during January, February and March, but they resulted in a stalemate. Alexander then shifted the bulk of the 8th Army west of the Apennine Mountains in April. On May 11 he launched the massive Operation Diadem. This broke the Gustav Line, brought relief to the beleaguered Anzio beachhead, and liberated Rome on June 4. Later in 1944, promoted to field marshal, Alexander became supreme Allied commander of the Mediterranean theater. He engineered the air, sea and ground movements that broke the German Gothic Line, seized all of Italy and compelled the Germans to capitulate in April 1945.

In 1946, Alexander was made a viscount and named governor-general of Canada. He served there until 1952, when he was named both an earl and minister of defense in Sir Winston Churchill’s cabinet. He retired in 1954 and was involved in business until he died on June 16, 1969, in Slough, England.

A man of great personal charm, Alexander was handsome, self-possessed, modest and distinguished in appearance. Field Marshal Alan Brooke, Chief of the Imperial General Staff, said Alexander was always “completely composed and appeared never to have the slightest doubt that all would come out right in the end.” Eisenhower called him “broad-gauged,” meaning that he worked on an Allied rather than a narrowly nationalistic basis. His most important qualities were his ability to impart and instill confidence among superiors, colleagues and subordinates and his capacity to persuade a multitude of Allied contingents to work together toward common goals. He was known for his charm and imperturbability.