Reading Time: < 1 minute Herefordshire Freemasons have made a donation of £1,000 to the Hereford Breast Cancer Haven. This continues a long tradition of support from Freemasons for this excellent and worthwhile organisation, and the Province has made a commitment to support the Haven with at least £1,000 a year through the charity’s Guardian scheme.

Reading Time: 2 minutes £10,000 for Midlands Air AmbulanceThe Midlands Air Ambulance Charity is dear to the hearts of many Freemasons in the Province, providing a service which is especially important in a thinly populated rural area such as ours. The PGM, RW Bro Rev’d David Bowen, and his Deputy, VW Bro Michael Roff, presented a further £10,000 to the MAAC at Strensham Airbase on 30 April 2016. £6,000 of this was raised by Herefordshire Freemasons and provided through the Herefordshire Masonic Charity Association. The other £4,000 came from the Grand Charity as part of its programme of support for local causes throughout England and Wales, and which is distributed through the Provinces. 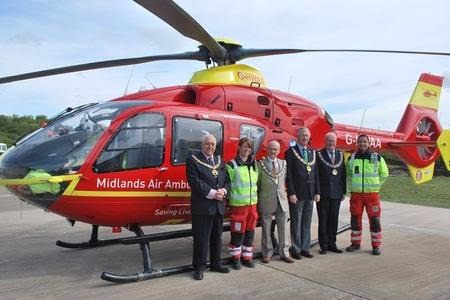