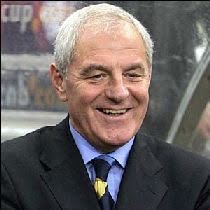 Walter Smith OBE (born 24 February 1948) is a Scottish football manager. His most recent club was at Scottish Premier League club Rangers. Smith had a relatively modest playing career, consisting of two spells with Dundee United which was split by a short time at Dumbarton.

A pelvic injury meant he moved in to coaching at Dundee United under Jim McLean and he also took charge of Scotland’s under-18 and under-21 teams. Smith was also assistant to Sir Alex Ferguson at the 1986 FIFA World Cup in Mexico after it had been announced that he would be moving to Rangers as assistant to Graeme Souness.

In 1991 Smith became the manager of Rangers, he won 21 major honours in two spells at the club, including ten league titles, and guiding the team to the UEFA Cup final in 2008. Smith is the second most successful manager in the history of Rangers behind Bill Struth. In 1998 he left Rangers and managed Premier League club Everton for four seasons, but was sacked in 2002. Smith was later appointed Scotland manager in 2004 after a brief stint as assistant manager to Sir Alex Ferguson at Manchester United. He presided over a revival in the national team’s fortunes, taking Scotland seventy places up the FIFA World Rankings, before returning to Rangers in 2007. He won eight of his trophies with the club during this time, before leaving in 2011.

Walter Smith is a member of Lodge St. George No.503 Helensburgh.