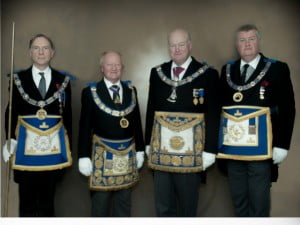 On October 24th the Province of Monmouthshire was fortunate to have the installation of a new Provincial Grand Master and Most Excellent Grand Superintendent for the Holy Royal Arch in the person of RW Bro. Richard G. Davies. The last occasion this happened on the same day was over 75 years ago.

It was an extremely successful day and although an early start for many the day went as smoothly as could have been envisaged. Many thanks have been circulated and a letter of thanks has been received by the Province from the Pro Grand Master (Also the Pro First Grand Principal) who mentioned that the welcome he and his party from London received was very warm and the efficiency and decorum of both meetings were very impressive and was a tribute to those involved in the days organisation.

As far as distinguished guests were concerned, there was a plethora of high ranking Brethren/Companions from many Provinces, some had travelled great distances to be with us and we appreciate their efforts which no doubt enriched our day. The amount of visitors not only recognises the respect Monmouthshire has from other Provinces but emphasises the links we have with others who are prepared to give their time to ensure meetings such as ours are a success.

As we have enjoyed many years conjoined leadership from the Rev. Malcolm C. G. Lane, no doubt the Province will continue to move forward under the leadership and guidance of RW Bro./MEGS Richard G. Davies. 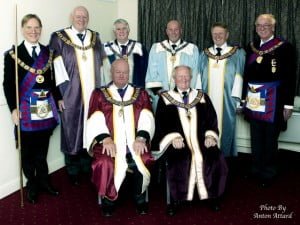 The day belonged to the Province. We all start by joining a Lodge and then considering our next progression. The Royal Arch is where we should complete our ‘masonic journey’ although there are many steps in between. October the 24th will no doubt be remembered by all who attended as a highlight of Freemasonry within Monmouthshire in both degrees for many years to come.