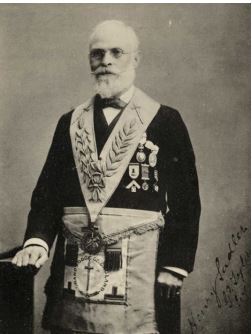 Masonic historians are familiar with the name of Henry Sadler, but many brethren of today are unaware of the debt of gratitude that all Freemasons owe him.

Henry Sadler was born on 19th October 1840 in the Village of Shalford, Essex, just north of Braintree. Little is known of his early life, but he became a merchant mariner at the age of 15, and by 1862 he was in London, where he spent two years as a commercial traveller.

It was at this time that Sadler’s connection with Freemasonry began, when he was initiated in the Lodge of Justice No. 147. In 1865 Freemasons’ Hall was greatly expanded, and Sadler was employed by the Grand Secretary’s office as assistant to Charles Bryant Payne, the Grand Tyler, where he assisted in the arrangements for the quarterly meetings of United Grand Lodge and Supreme Grand Chapter.

Sadler’s other duties at Freemasons’ Hall included that of housekeeper, for which living accommodation was provided. He would arrange the letting and the booking of rooms, and maintain the Hall in general.

The census for 1881 confirms there were 12 people listed as residents in the Hall – Sadler, his wife Elizabeth, their six children, Elizabeth’s older sister Ann, a servant, Eliza, the Irish door porter Nan Stanton, and Caleb Last, the house porter.

In 1879 Sadler became Grand Tyler and Grand Janitor, in which positions he assisted in many consecrations of Lodges and Chapters, thus becoming a well-know figure in London Masonry.
About this time, Sadler began his interest in the ‘doings’ of our Masonic predecessors, as he referred to it. As Grand Tyler and housekeeper, he had the ideal opportunity to look through all the old bookcases and cupboards and familiarise himself with their contents. At the same time, he started to catalogue the archives and collections that he came across.

He also began to make regular contributions to the Masonic press such as The Freemason and The Freemasons Chronicle. This enabled him to share the information that he had found, and brought him into contact with the likes of leading Masonic figures such as R. F. Gould. G. W. Speth and John Lane, thus Sadler’s reputation began to grow.

However, in 1883 a calamity affected Freemasons’ Hall. In early May of that year a fire broke out in the main Temple, completely gutting the roof, with the loss of the magnificent portraits of the Rulers of the Craft.

The statue of the Duke of Sussex that stood at the back of the dais was recovered and repaired. Fortunately, it had only been affected by smoke and water. A report in The Daily Telegraph and reprinted in The Freemason dated 13th May 1883, read: ‘It should be added that the regalia of Grand Lodge have escaped destruction as well as the throne used on special occasions when the Prince of Wales presides. “As to the origin of the fire, there appears to be little doubt that it was owing to a high beam which ran through a flue communicating with the kitchen of the tavern, becoming ignited. “It is due to Bro Henry Sadler, Grand Tyler, who resides on the premises, to say that but for his early discovery of the fire the whole of the buildings would in all probability have been destroyed.”

On 6th February 1986, John Hamill, then Librarian, received a letter from a Miss Florence Watt, one of Sadler’s granddaughters, informing him that she had been left some photographs of the fire by her mother. She then made a visit to the Grand Lodge Library and Museum and donated three photographs, one of which was taken after the fire. Miss Watt then recalled a story of her mother remembering being carried down the main staircase by her father on the night of the fire.

In all probability this may have been young Florence, who would have been five at the time. In the last paragraph of the letter she states: “The Sadler family had a lucky escape when the fire broke out, which incidentally my grandfather was told was caused by the builders running a beam through the chimney of the boiler that heated the Temple, and it caught fire. The Temple almost backed on to the main building, and the family had to go down the staircase which was on that side of the building.”

In 1887 Sadler was appointed sub-librarian of the United Grand Lodge of England in appreciation of all the work he had carried out in preserving the records and archives of Grand Lodge. In a 1904 publication, Sadler relates his story of the origins of the Library and Museum:

`As far back as the year 1837, the desirability of establishing a Library and Museum at the headquarters of the English Craft was enunciated by John Henderson, Grand Registrar and President of the Board of General Purposes, who at the Quarterly Communication on the 6th of September in that year, proposed ‘That it is expedient to form a Masonic Library and Museum in connection with Grand Lodge.
“This motion, having been duly seconded, it was: ‘Resolved that it be referred to the Board of General Purposes to consider and report on the mode of forming, preserving and regulating a Masonic Library and Museum.
“John Henderson may, therefore, be fairly designated the father of the valuable collection of books and relics of the past that form so attractive a feature of the buildings in Great Queen Street.”

Sadler then informs us that it was Dr Robert Crucefix, vice-president of the Board of General Purposes, who made the first donation by presenting the Library with four volumes of The Freemasons’ Quarterly Review, handsomely bound.

On 27th February 1838 the Board of General Purposes made the following statement: “That a room on the ground floor be set aside for the purposes of a Masonic Museum and Library. That a sum of money not exceeding £100.00 be placed at the disposal of the Board for the purpose of providing for the reception of books, manuscripts and objects of Masonic interest, and for commencing the formation of a Library and Museum. That for the present time it will be convenient to appoint the Grand Secretaries ex-official curators of the Library and Museum.”

Dr George Oliver appears to have been the next contributor to the Library, when on 28th May 1838, he presented three volumes of his well-know works.
Sadler then tells us that on 5th September: “Brother George William Turner, Past Master of Lodges 53 and 87 had presented eighty volumes of books to the Library of Grand Lodge.” The Lodges have now been renumbered Strong Man No. 45 and Mount Lebanon No. 73.

It was in 1887 that Sadler published his ground-breaking work on the origins of the Antients Grand Lodge. He had already rediscovered Morgans Register, the first register and minute book of the Antients, and the Charter of Compact.

However, it was in Masonic Fact and Fiction that he finally proved that there had been no schism with the Premier Grand Lodge, and that the Antients were mainly unattached Masons from Ireland. With the publishing of Masonic Fact and Fiction, Sadler’s reputation grew, and by 1907 he had published six more books and many papers and other contributions.

On his retirement as Grand Tyler and Grand Janitor in 1910, an office he held for 31 years, he was appointed the first Librarian and Curator to Grand Lodge.

Unfortunately, Sadler died on 15th October that year, and was buried in the Great Northern Cemetery, New Southgate, London. Of all the many eulogies and written obituaries on Henry Sadler, one in particular sums up the man, and was given on 8th November 1911 by Edmund Dring.

“It is difficult on this sad occasion for one so young in years, compared to our late Master. I remember well the occasion on which I first met Bro Sadler. It was now nineteen years ago, and the brusque manner in which he chided me for an unconscious indiscretion was distasteful to me, although it was deserved.

“When, soon afterwards, I got to know him more thoroughly, I wondered however I could have resented his fraternal caution, for I quickly found that beneath his epidermis brusqueness, there was a kindliness and paternal solicitude the extreme depth of which I never fathomed.

“His writings are already historical, his life and work will become historical, but future generations will unfortunately never be able to appreciate his deep modesty, to feel his affectionate regard, or realise that in all matters of vital and most questions of Masonic interest and antiquarianism, they have lost their expositor.

“His knowledge was so far-reaching and his extreme willingness to help real students at all times so well-known, that every Brother throughout the world who was interested in Masonic history must personally mourn his loss.”