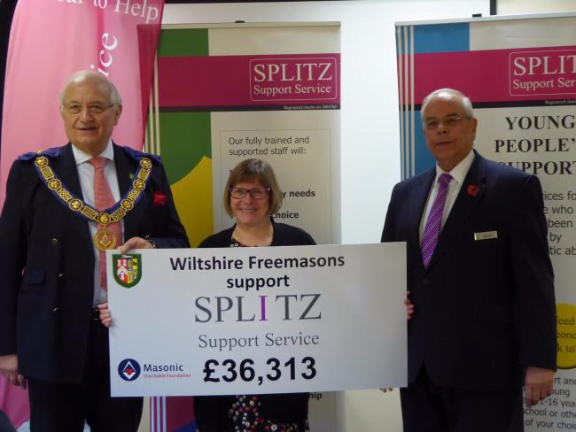 A CHARITY which works with children who have experienced domestic abuse has been given a big helping hand by the Masonic Charitable Foundation.

Splitz, which supports children in Trowbridge, Westbury and Melksham, has been given £36,313 so it can help even more of the county’s most vulnerable youngsters find their feet.

Te charity reports that in Wiltshire the estimated cost of domestic abuse is £20 million per year, while the estimated number of incidents annually is 3,085.

Fran Lewis MBE, Splitz executive director, said: “I was absolutely amazed when we were told about the funding – it’s very rare we get a donation of that size.

“It will make such a difference to the work we can do with young people. Lots of people who come to us are in a bit of a pickle and are disengaged.

“The abuse isn’t always direct; for children to see their parents being abusive towards each other, whether it’s physical or verbal, can be tragic and can make them go to be feeling anxious, but it shouldn’t be like that.

“Children are very perceptive and they know when things aren’t right, even if they’re in the next door room, it’s like they have little antennas.

“They just need somebody who can listen, who understands where they’re coming from. For many of them it’s like they have a splinter in their heart and we try to remove it.

“We must say a massive thank you to the foundation, it was a really lovely surprise.”

The grant, which has been funded by Freemasons in England and Wales, will fund two skilled practitioners who will work with 70 local children and young people between the ages of 9–16 who have experienced domestic abuse.

Philip Bullock, chairman of Wiltshire Freemasons, said: “We are very pleased to be able to support Splitz’s valuable work with young people in our community.

“Helping these children now will give them a real chance of a better life in the future.”

Last week Splitz was also given a £21,500 donation towards its Buddy Scheme, which will enable the charity to take care of volunteers to the same high standard as its paid employees.