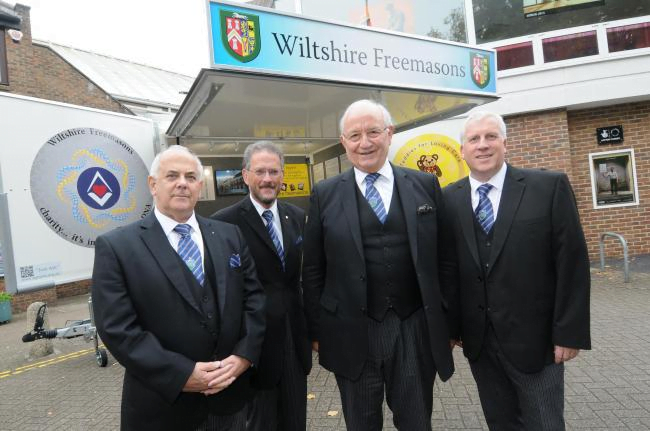 THE ANNUAL Wiltshire Freemasons meeting was held at Salisbury City Hall, with over 600 Freemasons present.

During the meeting, there was a donation of £3,000 made to Julia’s House, with the money coming from Freemasons at various provinces around the county.

The Freemasons are also making a large donation to the Air Ambulance in the next few weeks, and three other hospices in and around Salisbury.

The other charities hosted at the event were the Royal British Legion, the Armed Forces charity, Dorothy House Hospice Care, and Teddies for Loving Care.

Phillip Bullock, Provincial Grandmaster of the Wiltshire Freemason’s, was keen to stress the modern-day relevance and appeal of the society: “We can help build men’s confidence, personally or professionally, we can help people meet a huge variety of people, because our membership is a very broad church in terms of professions, and it gives you that sense of great friendship.

“More so, it gives you the chance to provide at a local level and contribute to large amounts of money going to local charities”

Event organiser Des Morgan said: “One of the things that we want this sort of event to dispel is the concept that we are in some way a society who don’t welcome new people.

“We have a website, we have a facebook page, and we have a twitter page, so people can see exactly who we are and what we do in Wiltshire.

Des added: “Only this weekend, Wiltshire Freemasons are supporting PSA tests for men with prostate issues, which will be held in our Masonic Hall in Crane Street in Salisbury, through a charity (The Loganberry Trust).

“This is something we are providing, free of charge.

“We have been doing this for two or three years now, and two weeks ago in Devizes we had around 250 people through the door, and we are anticipating similar numbers next weekend in Salisbury.”

“We are inviting anyone to come for this test, and to come look at the Masonic hall.

“Anything anyone might be wondering about, they can come and look for themselves.”

Phillip added: “Despite past thoughts that we are secretive, we clearly aren’t.

“We want people to come along”.

The Loganberry Trust’s PSA tests are on Saturday October, 13 from 10.30am to 1pm at Freemasons’ Hall, Crane Street, Salisbury