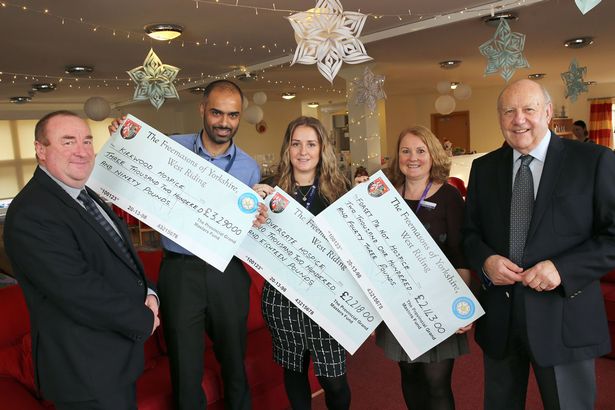 Three hospices have received thousands of pounds from a Freemasons’ charity.

Kirkwood Hospice at Dalton, Overgate Hospice in Elland and the Forget Me Not Children’s Hospice at Bradley received cheques totalling £3,290, £2,218 and £2,143 respectively from Alan Elstone and John Gledhill, of the Provincial Grand Lodge of Yorkshire, West Riding, on behalf of their national charity. The amounts donated were calculated on the number of beds and community services each hospice provides.

Yorkshire’s 15 hospices have received over £45,000 from the Freemasons’ national charitable foundation as part of a £600,000-plus handout across England and Wales. Since 1984, its national charity has donated over £11m to hospices nationwide. That is in addition to monies given to local communities through West Riding Masonic Charities Ltd.