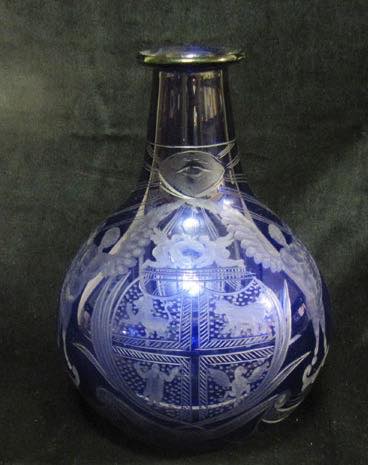 Carafe in Bristol blue glass engraved with the Antients Grand Lodge coat of arms, circa 1790.

Carafe of blue glass with a bulbous body and a tapering neck with a flared lip. On the body of the carafe is engraved the coat of arms of the Antients Grand Lodge under an All-seeing eye.

Decanter in glass for Lodge of Perfect Union, circa 1770.

Bristol blue glass decanter with tubular neck, sloping shoulders and a facet cut circular stopper, all hand painted with gilt masonic symbolism. The tubular neck has a painted fruiting vine with grapes circling downwards around it.

The main body is painted with the coat of arms of the Moderns Grand Lodge, a shield with a central gilt chevron containing a pair of compasses. Above the chevron are two castle towers with a third below. To each side of the coat of arms are the columns Jachin and Boaz. Surrounding the central design is scrolling foliage.

To the left, between the foliage and the column Jachin, is a set square and further left is a level and a plinth. To the right, between the foliage and the column Boaz, is a plumb rule and further right is a pair of compasses on a sector surrounding a sun in splendour and a beehive. Below the coat of arms is scrolling foliage and a chequered pavement, which has more foliage below it. Above the coat of arms is a crest being an arm and hand holding a trowel on a corded rope.

Lodge Glassware: Masons sometimes commissioned the finest items for their tables. The Bristol Blue glass decanter was made c. 1770 for the Lodge of Perfect Union, which met in Chippenham, Wiltshire between 1763 and 1773.

During the late 1700s Richard Champion, a merchant and potter, was using glass furnace technology to develop a recipe for porcelain. He succeeded in this and patented his invention. He worked along side William Cookworthy, a chemist, who found a good quality cobalt oxide at the Royal Saxon Works in Saxony and obtained the import rights to help Champion produce a blue glaze decoration on the porcelain. All the cobalt oxide that was imported into Britain for the next twenty years was controlled by Cookworthy.

There is no evidence of when or who first made Bristol Blue Glass but the combination of fine cobalt oxide and the recently invented lead crystal gave a deep blue, which had never been seen before. The most celebrated maker of Bristol Blue glass was Isaac Jacobs whose father, Lazarus Jacobs, started their ‘Nonsuch Flint Glass Manufactory’ in the late 1780’s. By the turn of the century the company held a Royal warrant and were making glass for the aristocracy of Europe. Isaac Jacobs was the first glass maker to sign his work giving an undisputed provenance.