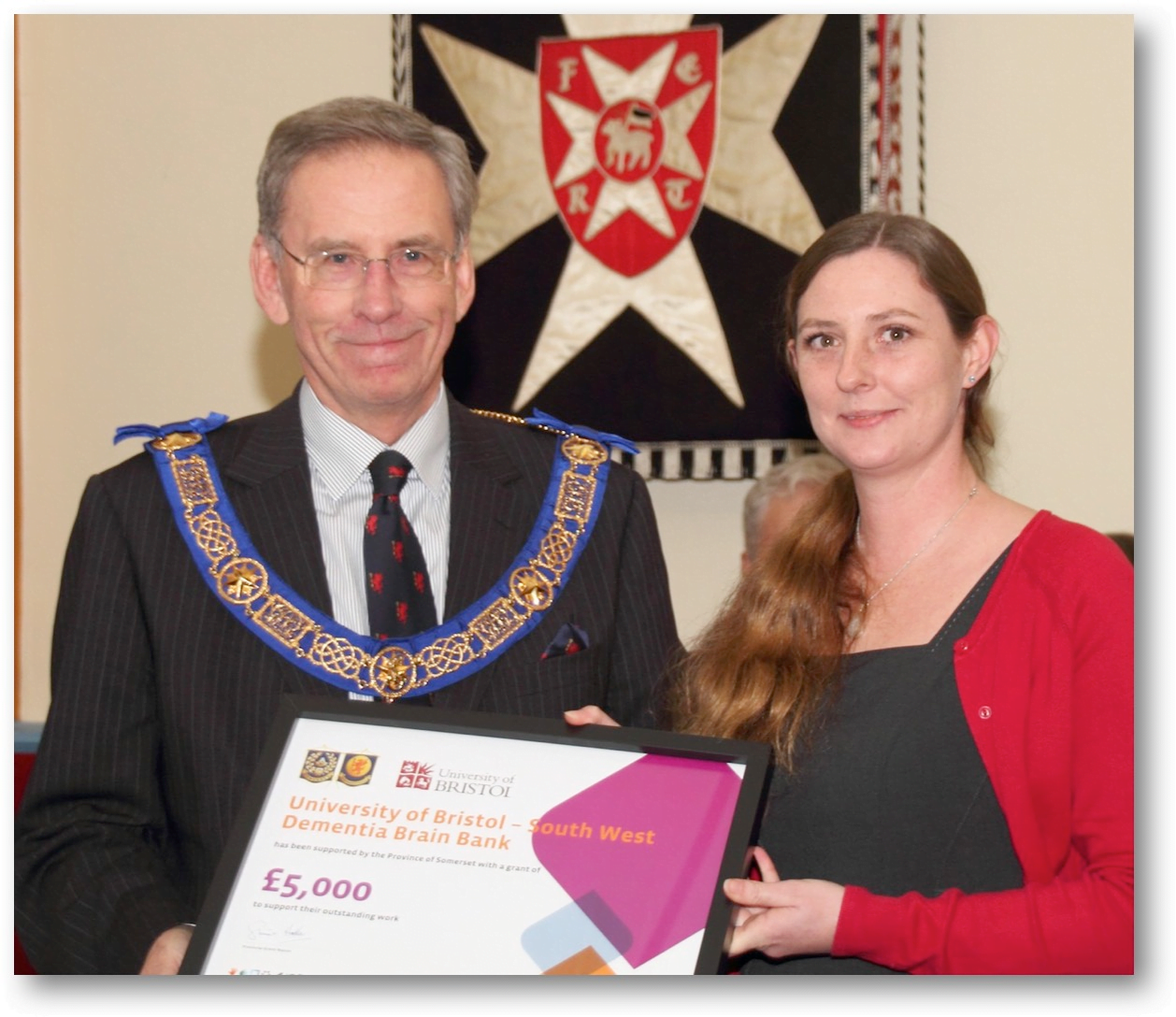 Over 50 invited brethren and guests joined the PGM Stuart Hadler and his wife, Susan, for a special charity event held at Weston-super-Mare Masonic Hall on November 30th 2018. Stuart welcomed the guests, and in particular, Councillor David Jolley, Chairman of North Somerset Council and his wife Susan. He then explained that the awards were funded either through the Masonic Charitable Foundation (MCF), The Somerset Masonic Charities (SMC) or individual Lodges. He said that the Province of Somerset are celebrating 250 years since its formation in 1768 and he was especially delighted to make these awards. Trevor Barnett, Charity Steward of Tivoli 9417 and St Kew 1222 was also in attendance representing both Lodges who donated to Prostate Cancer UK (9417) and Bone Cancer UK (1222). Six charities were represented and in total received awards amounting to £168,000. A short presentation was made by each charity, explaining their work and how the award would be applied.

Bristol University Alzheimer’s Research Dr Laura Palmer gave a fascinating talk on Dementia (a general term used to describe a range of neurological disorders), specifically Alzheimer’s disease. She said that currently around 850,000 people suffer from some form of Dementia and this is expected to rise to 1 million by 2025. Laura is the manager of the Bristol Brain Bank, where pioneering work is done to try and find a cure for this deliberating disease. She received an award of £5000 from the SMC which will be used to help purchase a new Microtome machine.

The Poppy Factory Trust Fundraising Manager, Claire Murray, explained that The Poppy Factory is the country’s leading employability organisation for veterans with disabilities. Since 2010 they have helped 950 people get back into work. The charity also employs around 30 veterans and dependents with disabilities in its factory, making remembrance products for The Royal British Legion and the Royal Family. She was delighted to receive an award from the MCF of £120,000 over 2 years to be managed by the SMC. Find out more about the Poppy Factory at www.poppyfactory.org 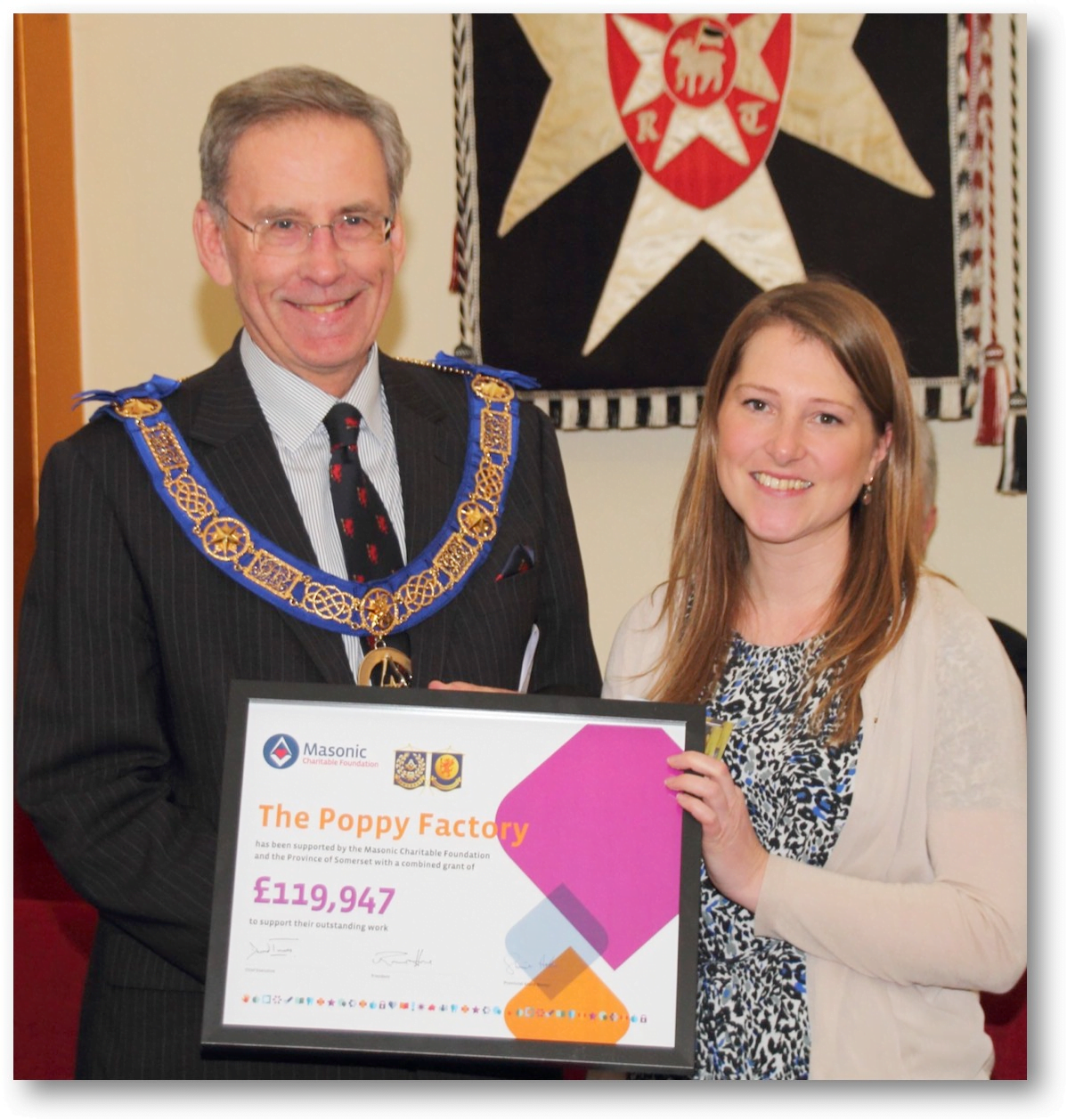 Children’s Hospice South West Lisa McKeever representing the charity was pleased to accept an MCF award of £750. She told the audience that the charity provide hospice care for children with life-limiting conditions, and their families. These range from respite and short breaks, emergency care, palliative care to end-of-life care. “We operate three hospices” said Lisa, “Charlton Farm, here in Somerset, Little Bridge House in Devon and Little Harbour in Cornwall. We receive funding from various Freemasons Lodges and are most grateful for their support.” https://www.chsw.org.uk

LifelitesSam Davies from Lifelites surprised the PGM by making a presentation to him! He thanked the Province for taking part in the ‘Life for Lifelites’ charity event, in which CEO, Simone Enfer-Doy, travelled 2,500 miles to 47 famous landmarks around the UK, using a variety of unusual and extraordinary forms of transport, all in just 14 days! Freemasons across the country assisted Simone by providing the vehicles as she travelled through their Province. Earlier the MCF had awarded Lifelites £35,000, which was in turn used to fund projects at Children’s Hospice Southwest. https://www.lifelites.org 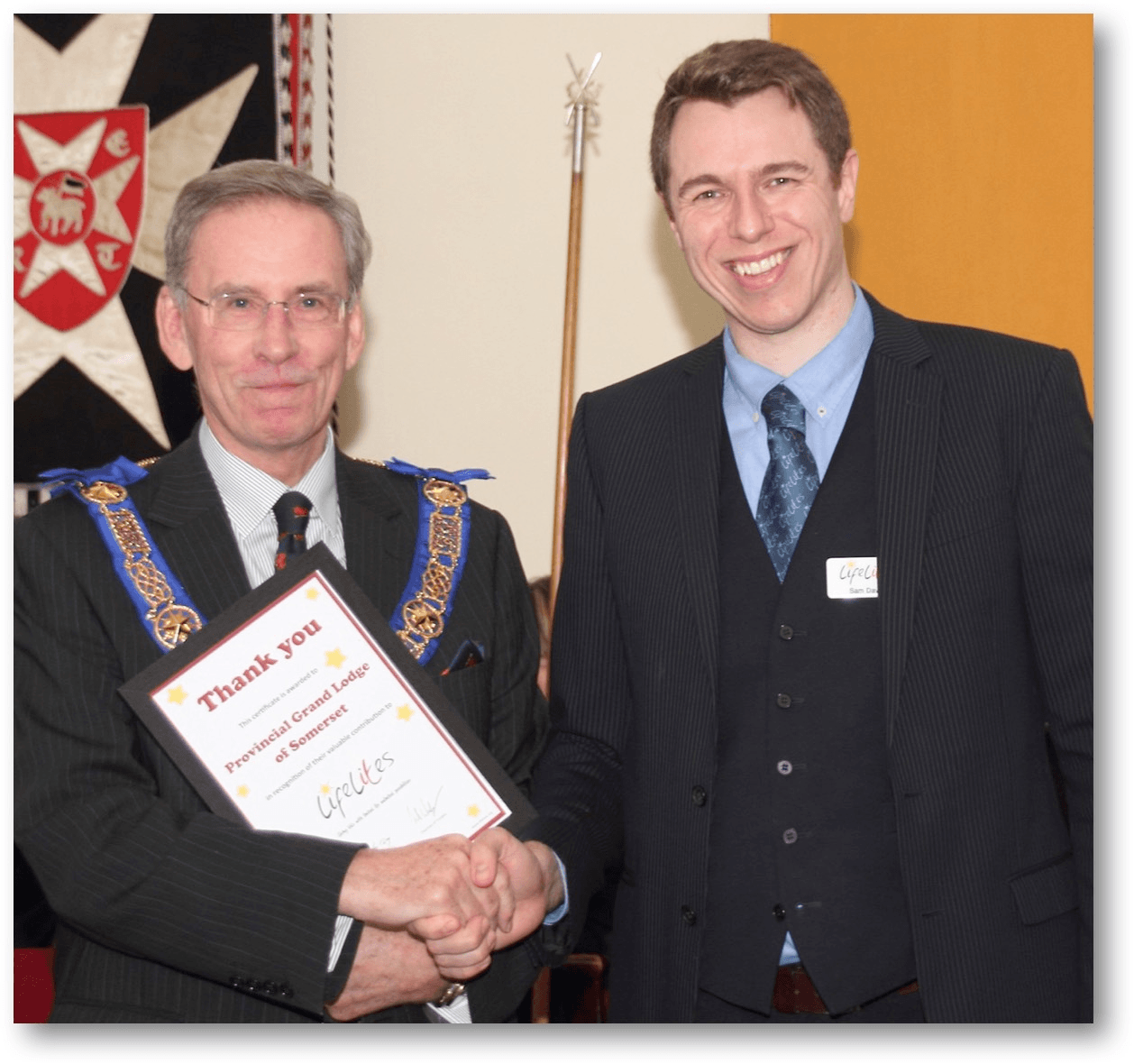 Bone Cancer UK Trevor Barnett Charity Steward of St Kew 1222 joined the PGM in making an award of £5000 to Sue Collard. The money was raised during IPM Mike Collins year as Master. Sue said that she has been raising money for the Bone Cancer Research Trust since their daughter, Mary died from the disease in 2012. She has run marathons and organised various fund raising events. She said “Our aim is to raise awareness of this terrible illness and we are grateful to the members of St. Kew for this most generous gift. There has been no improvement with Bone Cancer for more than 25 years which is why research is so desperately needed to find new treatments.” https://www.bcrt.org.uk 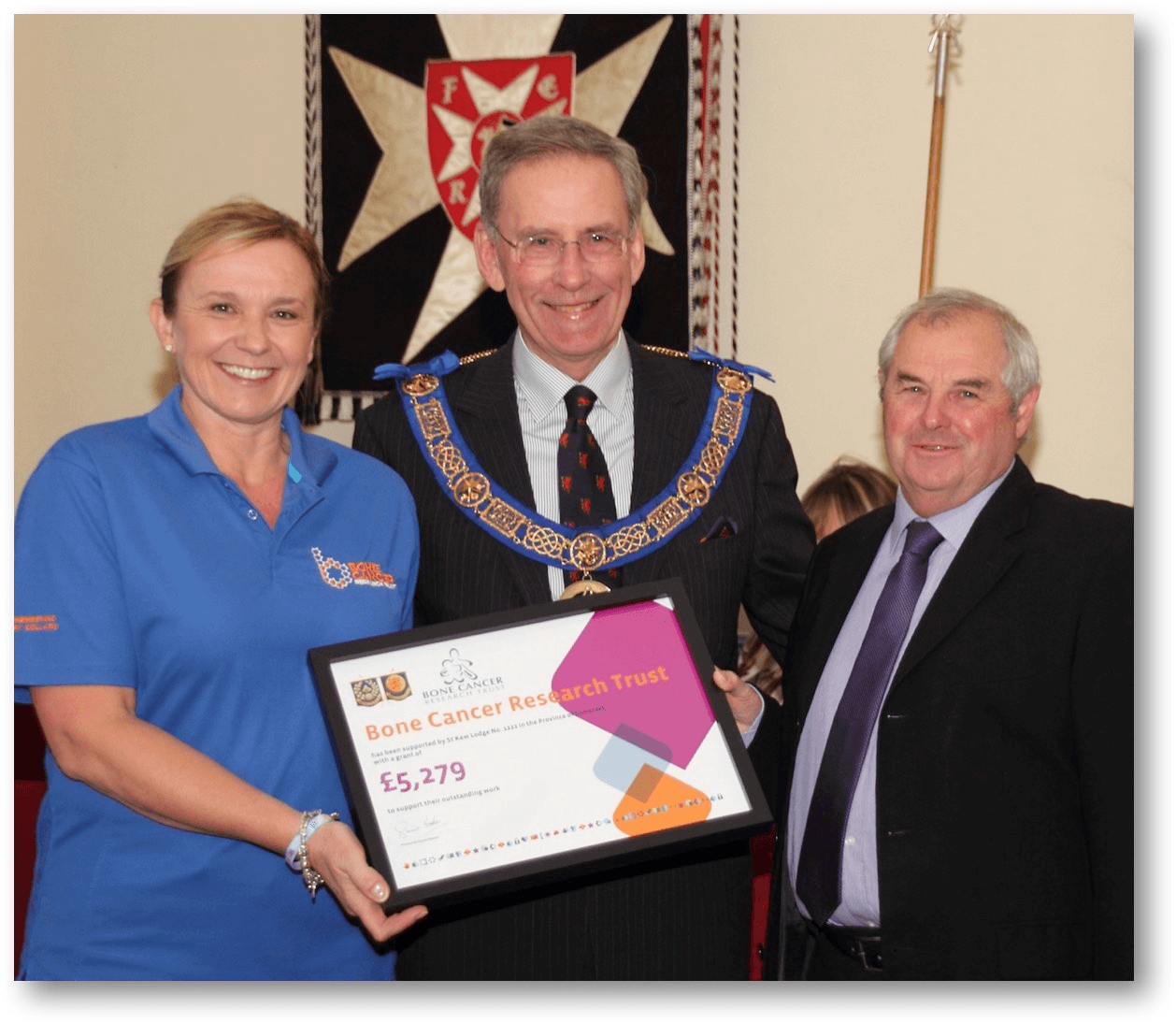 Prostate Cancer UK Ian Adamson on receiving an award of £2000 told the audience that 11,000 men die from prostate cancer every year, and that on in eight will be diagnosed within their life time. To put this into perspective he said “Statistically 4 men in this very room will have prostate cancer and not know it. However 330,000 men are living with, and after prostate cancer treatment. Prostate Cancer UK has a simple ambition – to stop men dying from prostate cancer by focusing on radical improvements in diagnosis, treatment, prevention, and support.” The money was raised by the IPM of Tivoli 9417, Daniel Kennedy, during his year as Master. www.prostatecanceruk.org 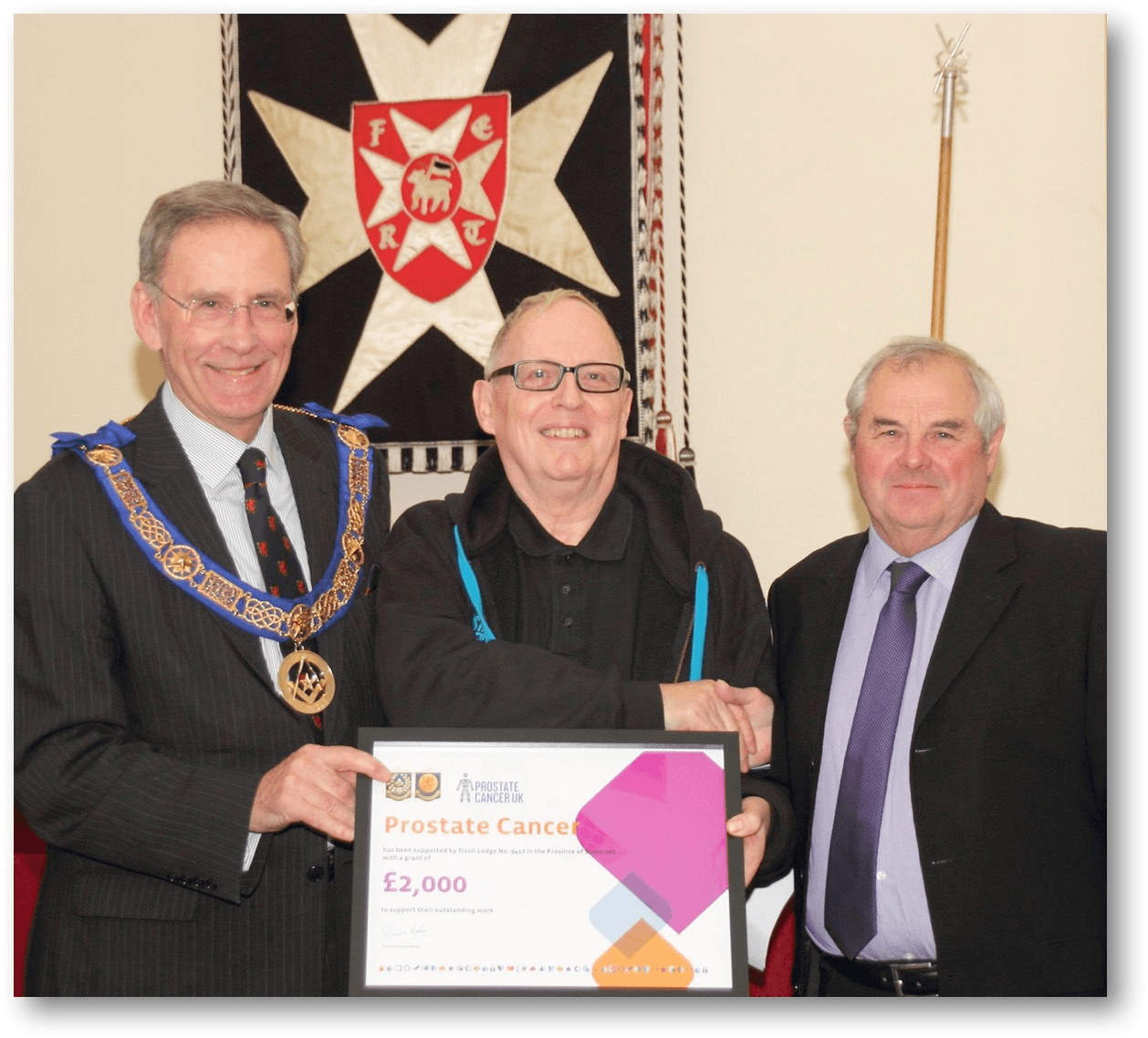 Following the awards the Provincial Grand Charity Steward David Maddern explained the background of the Masonic Charitable Foundation (MCF) and how Freemasonry over the past 40 years has donated over £130 million to charity; Current donations are running at over £5,000,000 and consist solely of the generosity of individual freemasons, their families and friends. Barry Davies Editor – Compass Magazine 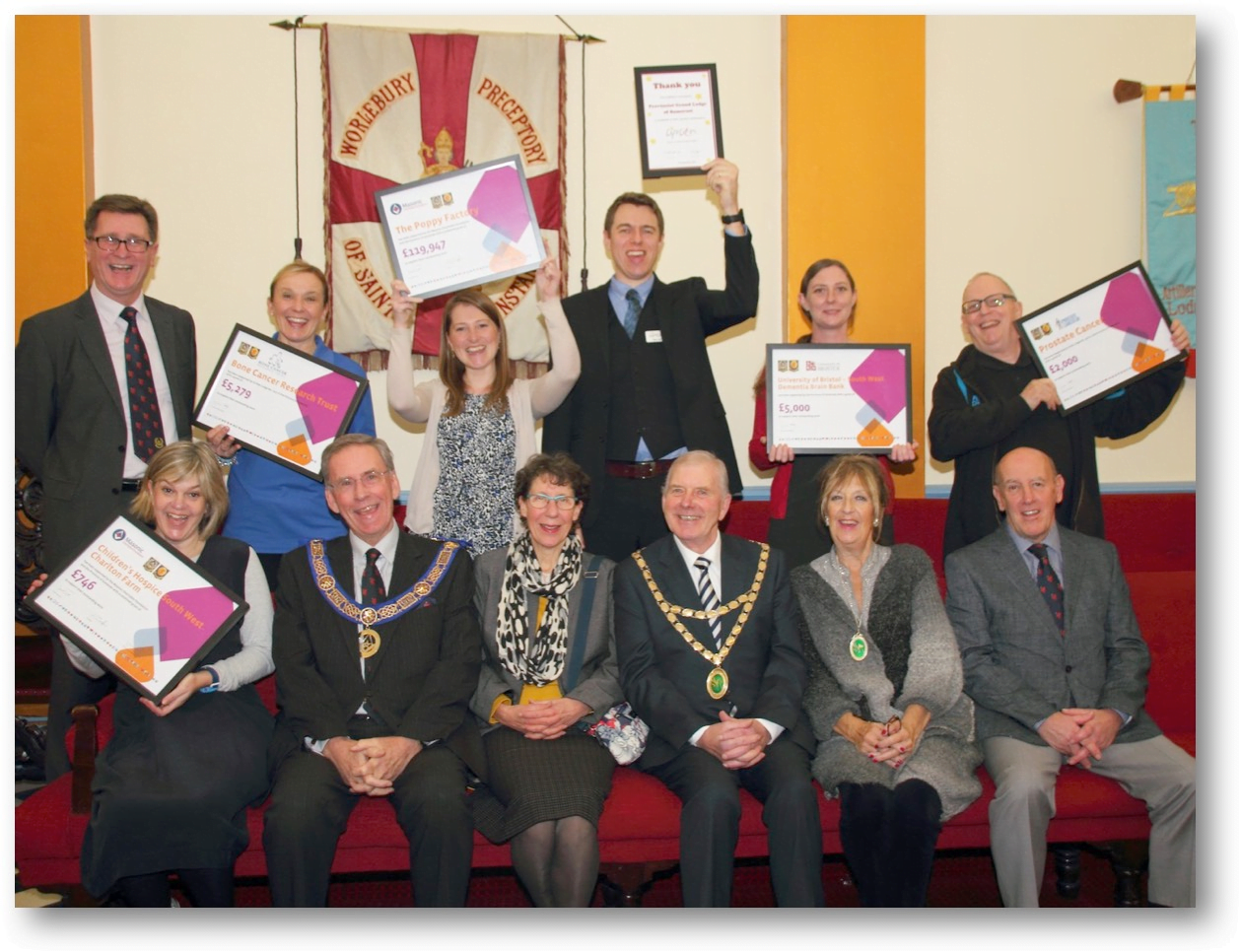 The charities with their awards