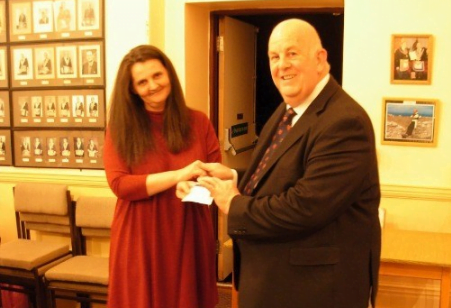 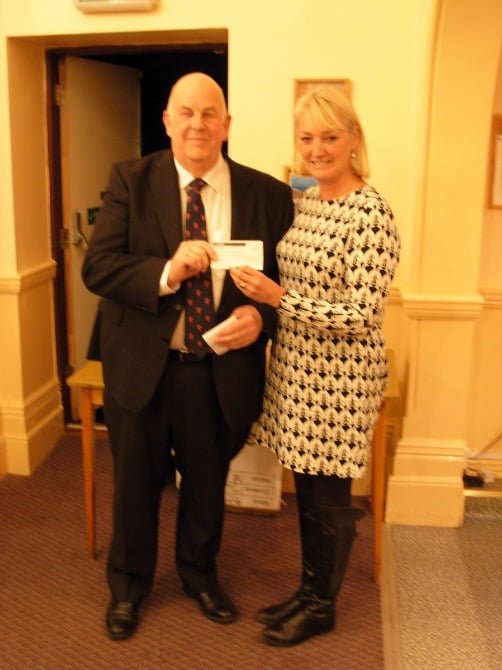 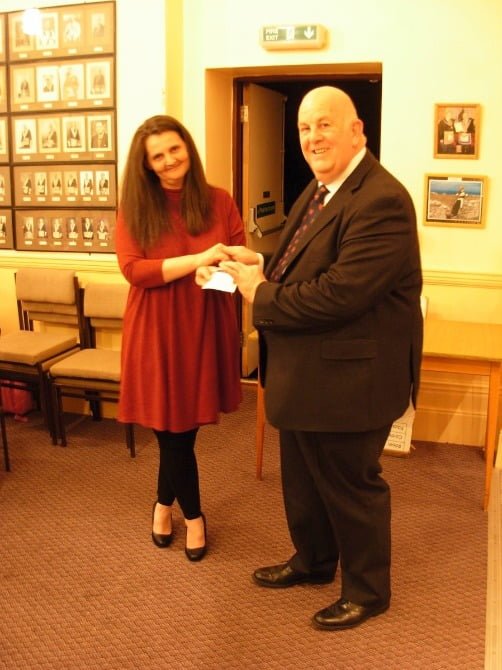 Minehead Masonic Hall was the venue for the Exmoor Lodge No 2390 Charity Presentation Evening on Thursday 15th December.Worshipful Master, Garry Holman, was delighted to be able to celebrate his successful year as Master by personally handing the donations from the Lodge to representatives of his chosen local charities.

Garry’s principle charity for the year was Children’s Hospice South West, which was represented that evening by Paula Garrett, their Community Fundraiser.Paula explained how they provide hospice care for children with life-limiting conditions and also offer support for their families. The care offered is wide ranging; respite and short breaks, emergency care, palliative care and end of life care. There are currently three hospices run by the charity; Charlton Farm in North Somerset, Little Bridge House in North Devon and Little Harbour in mid Cornwall.

A Lodge cheque for £1000 was donated to Children’s Hospice South West, with a further £1000 being very generously donated by the Provincial Grand Lodge of Somerset by way of matching Exmoor Lodge’s donation.

The decision was made to donate a proportion of the monies raised from these successful events to the Masters of Exmoor Lodge and St Bernard Lodge in support of their respective local charitable giving.Paula was delighted to be receiving a total of £2150 which will be used to fund the care at the North Somerset and North Devon hospices, as it is these sites which provide the care for those in need from the Minehead area in particular and Somerset in general.

Attention then turned to The Seahorse Centre, Minehead, which is a day centre for adults with learning difficulties. They were represented by centre manager, Emma Cherry, who was thrilled to receive a cheque for £500, which will prove hugely beneficial to their essential ongoing fundraising efforts. The donation from Exmoor Lodge will be put towards providing the clients with fun, educational activities which includes their Christmas party.

Last but by no means least, the ward nursing staff of Minehead Hospital were represented at the event by two of its nurses.Exmoor Lodge provides the ‘makings’ for tea and coffee for staff on the wards at the hospital throughout the year. This practice has become a continuing Exmoor Lodge tradition, originally started by W. Bro John Lendon in thankful recognition of the way his wife Marjorie was cared for at the hospital. The brethren of Exmoor have been proud sponsors of the tradition ever since.

The presentation evening was a great success. Garry and the brethren of Exmoor Lodge would like to thank all those who have helped support his year. A special mention of thanks must be given to those brethren and their family members who have organised and assisted with the numerous extra-curricular functions held at Minehead Masonic Hall this year. In all, £2585 has been donated by Exmoor Lodge in the cause of non-Masonic charities and £490 to Masonic allied charities during this year. W. Bro Garry and the brethren of Exmoor Lodge wish you all a happy, healthy and prosperous 2017.