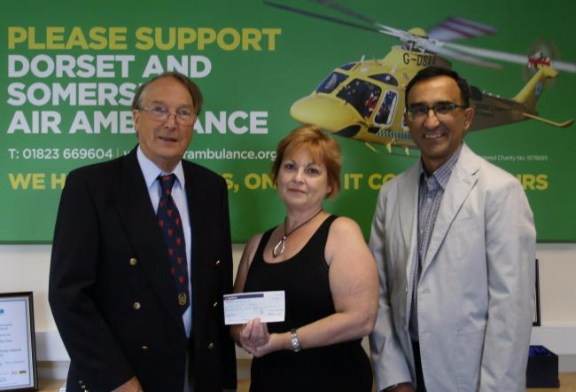 MEMBERS, wives and partners of Taunton‘s Vivary Masonic Lodge raised £475 at a Christmas gathering at the home of the then Master, Chris George and his wife, Rachel.

A cheque has now been presented to Tina Viksna, the Dorset and Somerset Air Ambulance fund raising manager, by Alwyn Clegg and Bhuvnesh Bhalla, father-in-law of the host and the lodge treasurer respectively.

Ms Viksna said that she and her colleagues are grateful for the continued and generous support of Vivary and other Masonic lodges to ensure a much valued service can continue to save lives.

The contribution is a precursor to a presentation of £15,000 being made by the Provincial Grand Master of Somerset Freemasons at Henstridge airfield, the air ambulance base, this month as part of Freemasons’ 300th anniversary.

The landmark is also being celebrated with an open day at Taunton Masonic Hall on September 30.