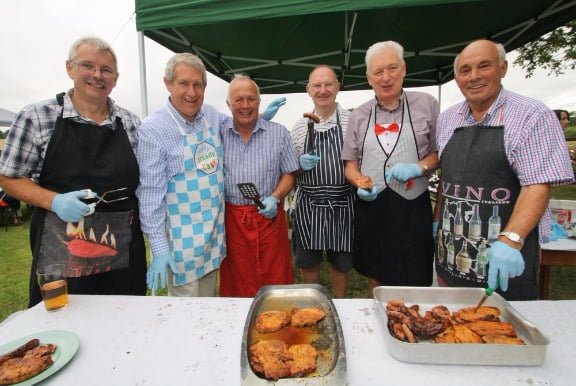 The event, now in its 18th year was staged by Ludlow’s Lodge of the Marches at Culmington Village Hall, and this year attracted a bumper amount of diners with about 150 turning out compared to last year’s 110.

Organiser Colin Edwards said it was heartening to see, and said the event had raised £1,700 from food and a raffle to go towards good causes in the future.

He said: “It was a magnificent turn out in what was very reasonable weather. Everyone enjoyed themselves and the food was as good as ever, so thanks go to the ladies who prepared it.” On top of enjoying the barbecue, two cheques for £1,000 each were handed out.

Mr Edwards said: “Money was given to the local office of Shropshire Mind and Margaret Price gave a little bit of a talk about the importance of what they do.”

He said the Mark Master Masons, an order of the Freemasons, also gave money to Shropshire and Staffordshire Blood Bikes.

The Staffordshire and Shropshire Mark Master Masons are trying to raise £40,000 to buy two new bikes for use to make urgent deliveries of blood, plasma and other medical supplies around the health trusts in the region.

He said the drive to support blood bikes was taking off with Masonic groups across the county.

“This is going to become a national thing in all probability,” he said.

But just as important as the fundraising and donation giving was the chance for old friends, new friends and local families to meet up for a relaxing social occasion.

“Thanks to everyone who came along and made it such a fantastic day,” he said.

Other causes for which the Freemasons in Ludlow have raised money include the Severn Hospice, Hope for Tomorrow, Nightingale Nurses, Macmillan Nurses, Cancer UK and Hope House Hospice.