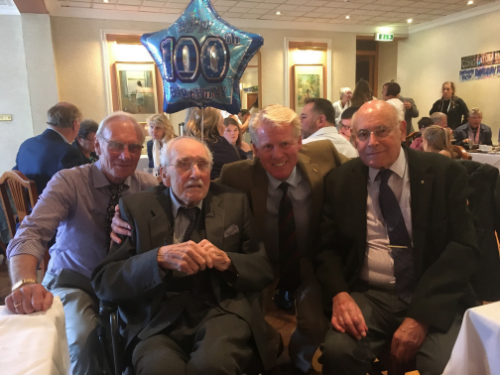 Saint Barbara Lodge’s Honorary Member, W.Bro. Fred E. W. Minchington, MBE celebrated his 100th Birthday at the Littlebury Hotel, Bicester on Sunday, 8th October 2017. Here he is pictured with Son, Noel (left), Dale Osborne (PPrJGW) and the inimitable Tony Brace. It was a joyous occasion and Fred was in good form, addressing everyone and saying how much he was enjoying the occasion, and how grateful he was to everyone for coming.

Noel said that his Father’s 100 years was too long and eventful to cover in a reasonable time, so he decided to read a manuscript of Fred’s diary extracts from 1944. It started with the notification that they were mobilising and covered the events of each day aboard the landing craft Fred had been assigned to, including their arrival at Sword Beach on D-Day and the six perilous days that followed as they moved up-river towards Pegasus Bridge and Caen, and their narrow escape back to the Channel.

It was a very detailed and moving account of what Fred had been through, and how thankful he was for the “Grace of God” to have survived.Fred continued his military career after the War, achieving the rank of “Major” and the position of “Adjutant” for the Bicester Garrison.May we all wish Fred “Many Happy Returns“.For anyone wishing to learn or recall what happened at Sword Beach on 6th June 1944, here’s some info’: