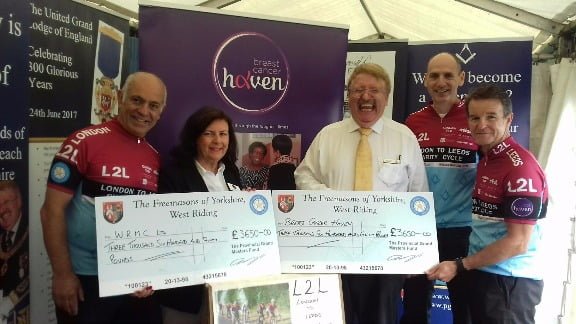 The Lodge of Dawn, a Masonic Lodge in Leeds, West Yorkshire. If you are interested in becoming a Freemason in Leeds, or you would simply like more information about Freemasonry in Leeds then please visit them at

A group of intrepid West Yorkshire Freemasons successfully cycled over 200 miles from Freemasons Hall in London to Castle Grove Masonic Hall in Leeds, in an impressive 15 hours – in the name of charity.

The “L2L Cycle”, which featured 11 Freemasons from a number of Lodges across West Yorkshire, has raised more than £7,000 for both the West Riding Masonic Charities Fund and local support centre, Breast Cancer Haven Yorkshire.

The L2L Cycle was spearheaded by Lodge of Dawn member Nigel Ziff who, as a cyclist himself, was keen to bring together cycling Freemasons from across the region to raise money for charity and to celebrate the Tercentenary of United Grand Lodge.

Nigel said: “The concept of cycling from Freemasons Hall in London, back to Leeds had interested me for a while, it was just a case of galvanising other masons who were mad enough to attempt it in under one day!

“Freemason’s are well known for their commitment to supporting local causes and this occasion was no different. I learned about Breast Cancer Haven through a fellow mason, whose wife had been supported by its Yorkshire centre.”

The Centre provides free support to anyone affected by breast cancer, aiming to achieve the best possible quality of life as they cope with their diagnosis and the side effects of their medical treatment.

Breast Cancer Haven manager Debra Horsman said: “We are so grateful to all the masonic cyclists for raising money for Breast Cancer Haven through this incredible challenge. We rely entirely on charitable activities such as this to fund our Yorkshire centre, so we are extremely thankful for their support.”

The challenge also raised money for the West Riding Masonic Charites Fund the designated charity of the Masonic Province of Yorkshire West Riding.

The charity supports past and present Freemasons and their dependants and assists the non-masonic community with grants for community projects and general donations. Only recently the fund donated £10,000 to the Manchester Bombing Fund.

Supporters including Brian Robinson, the first British cyclist to complete the Tour De France and Anthony Llewellyn, The Assistant Provincial Grand Master, welcomed the team of riders back to Castle Grove Masonic Hall in Headingley.

Nigel added: “Despite covering the 215 miles and climbing over 10,000 ft in 15 hours, all the riders were full of smiles when they arrived back in Leeds.”

The Lodge of Dawn, a Masonic Lodge in Leeds, West Yorkshire. If you are interested in becoming a Freemason in Leeds, or you would simply like more information about Freemasonry in Leeds then please visit them at