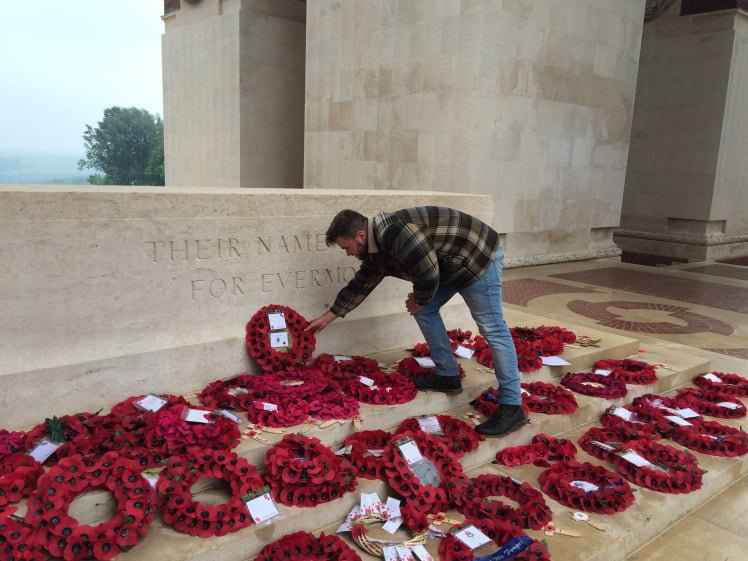 Bro. John Phillips recounts his recent trip to the Somme to lay a wreath on behalf of the Wyggeston Lodge and the Master whose father fought in the battle 100 years ago.

It seems strange to say this, to strip away 100 years in a few words, but I owe everything around me to the first day of the Somme. It was finding pieces of rusty, century old barbed wire on the battlefield that made me head to university to study archaeology. Before that I, like many people in their early twenties, had no clue where my life was heading. Six years after picking up that barbed wire, I’m sat writing this on my lunch break at my job as a full time archaeologist.
It was whilst studying at University of Leicester that I decided to follow in my grandfather’s footsteps and join freemasonry. That of course, turned out to be a decision that opened my life up to so many new friends, new experiences and new ways of thinking. The Somme sent me to Leicester. Without the Somme I would not be an archaeologist or a Freemason.
I’d known since that day six years ago that I needed to repay those that fought and died on July 1st 1916, if only in a small way. I never could have predicted I’d be paying my respect on behalf of Freemasons, but life takes you in so many different directions. Of course, for the 20,000 killed on the 1st July 1916, those twists and turns that make a life a life were never possible. 20,000 dead. That number gets retold so often that we become numb to it. 20,000 dead on a single day in the same place. It is utterly staggering.

At one of the festive boards of Wyggeston Lodge No.3448, I was chatting about the battlefields to some of the brethren, when our Master Elect leaned over and mentioned that his own father had fought at the Somme two years later in 1918. Paul Bodycot took the chair for the 2015/2016 Masonic year and I realised just how special, how once in a lifetime it was that the son of a Somme veteran would be Master 100 years exactly since the start of the first battle. Perhaps even more moving was that Paul’s brother Tom is a Past Master in the Lodge. Their father fought as a Private in the 2/4th Leicesters, C Company. He was captured on the 21st March 1918 during the first day of the German Spring Offensive at Ervillers. He was 19 years old. He would, in the traditional sense, have been too young to join the craft. 19 years old. Three years younger than I was when I found that barbed wire on the battlefield. I put forward to the lodge that I would lay a wreath at the Thiepval memorial to the missing, where the centenary will be largely focused. The idea was met with an instant yes. I was honoured to take on the responsibility.

Each time I drive through the Somme I am humbled by the calmness of the beautiful French landscape. Never could you imagine the horrors that occurred a century ago. As I walk through the miles of headstones it is easy to forget that beneath each name is the remains of an actual person, a mother’s son. As an archaeologist we often talk of how the people of the distant past lived full lives, had the same problems as us, the same woes. Those in the First World War were often so young that this was not the case. The youngest soldier to fight at the Somme was 12 years old. Those 20,000, and the hundreds of thousands throughout the war did not get to live their lives. We must never forget their sacrifice.

It was quiet as I walked towards the Thiepval memorial, wreath in hand. A group of school children were searching the list of names for any that matched theirs. I looked around at the fields, the mud and the sky. Nothing ever changes on the Somme. The same earth I walked across is the same the men fought for. It is a perpetual 1916. Farmers still find skeletons every year. It is not a part of history but a part of the present. As I placed the wreath, I thought of everything I owed to the boys of the Somme. I thought of Paul and Tom’s father. I thought of not only the Freemasons that found themselves in the trenches, but each and every soldier that gave themselves for their country. I suppose there can be no stronger masonic trait than that sort of selfless giving.

I placed the wreath and walked away. The words I’d written echoed through my head as I headed out into the countryside: “From the brothers of Wyggeston Lodge to those that gave their lives a century ago. We will never forget. Thank you”. 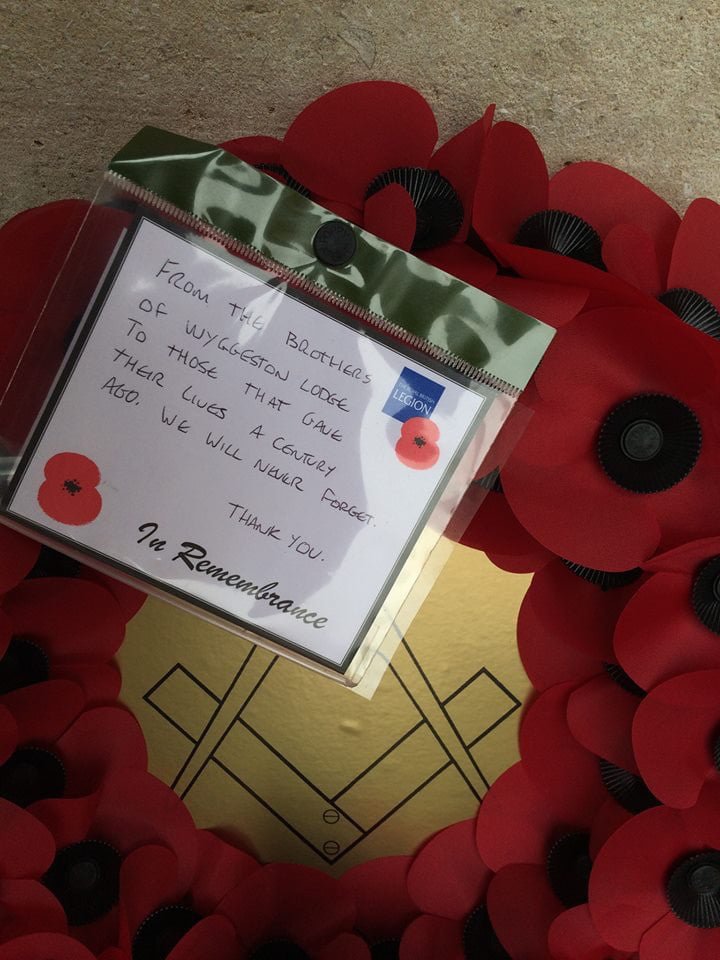