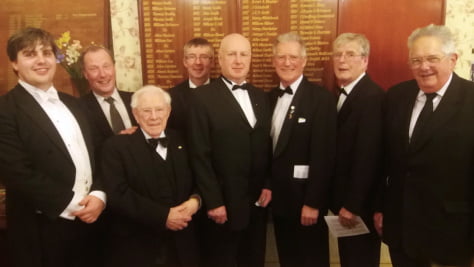 On 2nd February 2016, the Master and other members of the Wyggeston Lodge No.3448 visited the Royal Yorkshire Lodge No.265 for a second time.
Bro Peter Clarke who is a member of the Wyggeston Lodge and the Royal Yorkshire Lodge which he joined after finishing university and relocated back to his home town. The Royal Yorkshire Lodge was formed in 1788 and has met in Keighley since its consecration. The business of the evening was to install Bro. Peter Howarth as Master and to celebrate the festival of St John the Evangelist who is also the Patron Saint of Freemasonry.
The meeting was particularly special for Bro Peter Clarke as it was the first meeting at which the Masters of both of his lodges were present.
Once again, Bro Clarke was appointed as Lodge Organist and delivered the address to the Lodge Mentoring Co-ordinator. Due to the fact that the role of Lodge Mentor was a comparatively new office, it was the first time the address had been given. Bro Clarke said it was a privilege to be given the unique opportunity to write a and deliver the address for the Lodge. One of the visiting Brethren, Junior Warden Bro Paul Marvin, said: “It was very interesting to see the ritual of different Lodges”.