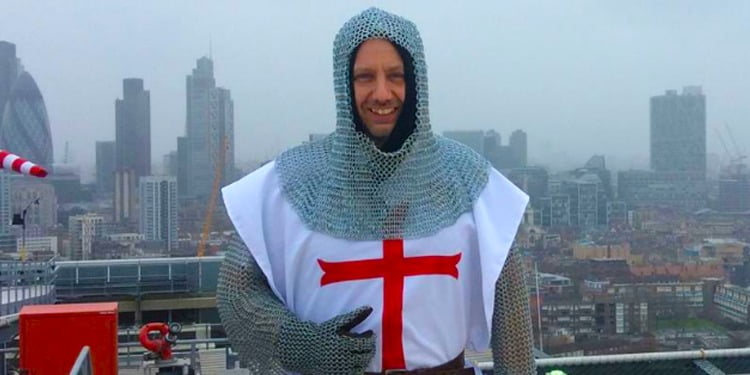 Shortly after the purchase of a London Freemasons’ lapel pin in support of the London’s Air Ambulance appeal, Bro David Cooke of Westminster City Council Lodge No. 2882 started to think of how he could increase his £5.00 donation to something a little bigger.

Bro Cooke has already run six marathons in support of various charities and is therefore no stranger to the hard work and dedication required to complete the gruelling course around the streets of London. On the 24th April 2016 he will attempt a Guinness World Record by running the London Marathon wearing full upper body, hood and glove chainmail attempting to beat the current world record of 5:49:07 set in 2014.

The suit of armour weighs just under 20kg and has restricted movement. This has forced him to review and change his plans on how to tackle the challenge. ‘Running is just not the same, for starters the tunic comes down just above my knees restricting your normal stride. Your body is enclosed in heavy chains and my first runs just felt so strange.’

A number of lodges and Orders with which he has connections have made pledges of support and his own mother lodge, Westminster City Council Lodge No. 2882, have supported him with additional collections at meetings.

At a meeting held in January 2016, Bro Cooke’s running identity was born following a speech at the Festive Board. ‘I was asked by our Charity Steward to say a few words about the challenge I had embarked on. Some brethren cheered at the end with the name Chainmail Dave, which has now stuck and I use to help promote my challenge.’

ChainmailDave16 along with the lapel pin design that started this challenge is now emblazoned on his running kit and race day costume. He is hoping to raise as much money as possible for the LAA appeal and has a target of £3,000. ‘This would be an amazing achievement for me but just completing the challenge would be great.’

You can personally sponsor Bro Cooke on his Just Giving page which can be found here.