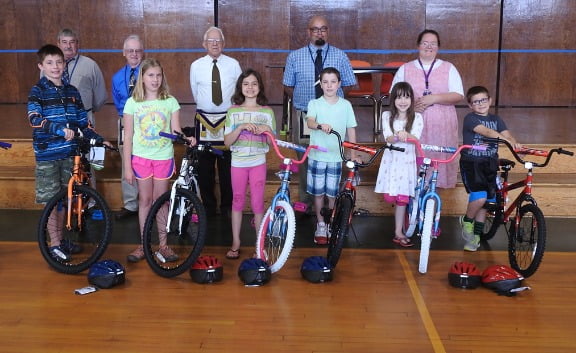 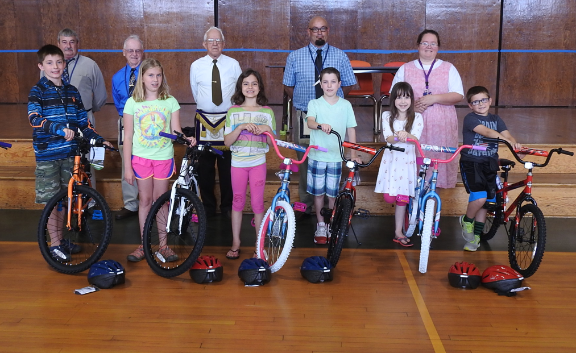 Academy Hill School students awarded bicycles on Wednesday are, from left to right: Braxton Malcore, Meredith Gagnon, Ava Curtis, Ben Hilton, Nathalie Baker and Connor Greenleaf. The fifth graders will be awarded tomorrow since they were participating in their step-up day on Wednesday and were not at the school. Wilton Lodge No. 156 A.F. & A.M. Masons, from left to right: Clinton Coolidge, Jr., Clinton Coolidge, Sr., Harland Harnden and Robert Holmes awarded the bikes. At right is and the school’s librarian Amanda Walz.

WILTON – A reading program sponsored by the local Masons awarded bicycles and helmets to elementary school students on Wednesday.

For the second year, members of the Wilton Lodge No. 156 A.F. & A.M. visited G.D. Cushing School and Academy Hill School and drew the name of a boy and girl in each grade who had read age-appropriate books and awarded a new bicycle and helmet. The reading program, Bikes for Books is designed to encourage students to read and is sponsored by Masons across the state.

With each book read, a student submits an entry towards winning a new bicycle in a drawing held at the program’s conclusion. The Wilton Masons rewarded 14 pre-k through fifth-grade readers at the two schools this year.

On Wednesday, second-grade student Connor Greenleaf stared down at his new red and black painted bicycle noting that the bike at home “is too big for me right now.”

The Masons’ Bikes for Books program started nine years ago when Mike Theriault proposed the idea to Euclid Masonic Lodge No. 194 in Madison where he is a past master. This year, 90 Masonic lodges in Maine will present nearly 1,500 bicycles to children participating in reading programs in schools.

Read more about the program here.