Following on from the several successful social events celebrating 300 years of Craft Freemasonry already held in the Wigan Group, this year’s church service was a special event with a tercentenary theme. Brethren and their families from across the Wigan and District Group, and even from further afield, filled St Matthew’s Church, Highfield to participate in the event and take part in the service.

The Wigan Group Chairman Geoffrey Porter was again proud to receive the Mayor of Wigan, Councillor Bill Clarke, together with Mayoress Mrs Joan Clarke, as honoured guests. The town’s first citizen has for many years been pleased to accept the group’s invitation to attend the service, and has been the honoured guest for the last decade. The group is understandably very proud of the close relations it has with the Wigan Borough and its dignitaries. 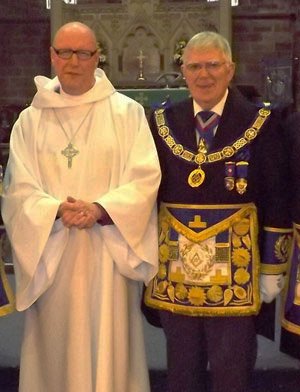 They were joined by a host of high ranking grand and Provincial grand officers, past and present, from the Craft and the Royal Arch, as well as representatives from a number of Masonic Other orders. To complete the high importance and dignity of the occasion was the attendance of Right Reverend Paul Bayes, Bishop of Liverpool.

The service commenced with a procession led by John Lomax, acting as director of ceremonies for the event. Bert Stockley led the service and readings were given by David Ogden and Geoffrey Porter. A fine address was delivered by the Bishop of Liverpool, who said he was delighted to be part of the service in the year that English Freemasonry was celebrating 300 years.

Since 1717, throughout the period of enlightenment, the Craft has played its part in the quest for wisdom, and the Bishop spoke of wisdom to solve problems, the wisdom of privacy, mystery and service, and making the world a better place by the power of the mind.

A collection was held and the congregation donated generously towards church funds. Before the final hymn and procession, and on behalf of the group, Geoffrey Porter introduced charity steward Chris Reeman who presented the Mayor with a cheque for £300 towards the Mayor’s charities, which this year are; Parkinson’s UK and Juvenile Diabetes Research Foundation. 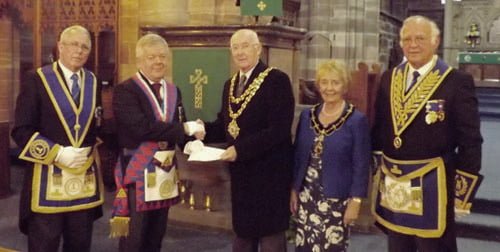 After the service the brethren retired in procession, leading the distinguished guests, the Bishop of Liverpool and Provincial Grand Master. It was then off to the Parish Hall, were they enjoyed convivial conversation and light refreshments, before the majority of attendees, including the PrGM and Mayor and Mayoress, made their way to Bryn Masonic Hall for a more formal meal.

The dinner at Bryn was a great continuance to the proceedings, with a packed dining hall and wonderful menu choice prepared and served with precision. Formal toasts were few and brief. Tony Harrison, in his response, thanked everyone for supporting the service and specifically the group officers who had worked hard behind the scenes, and Christine and Phil Hughes for the quality of their meal and service.

Geoffrey Porter, David Ogden and John Selley, who work constantly on behalf of the group, can reflect on another very successful event orchestrated by them and the rest of the team.

The packed church at Highfield as Bert Stockley and the Bishop of Liverpool enter to take their places.