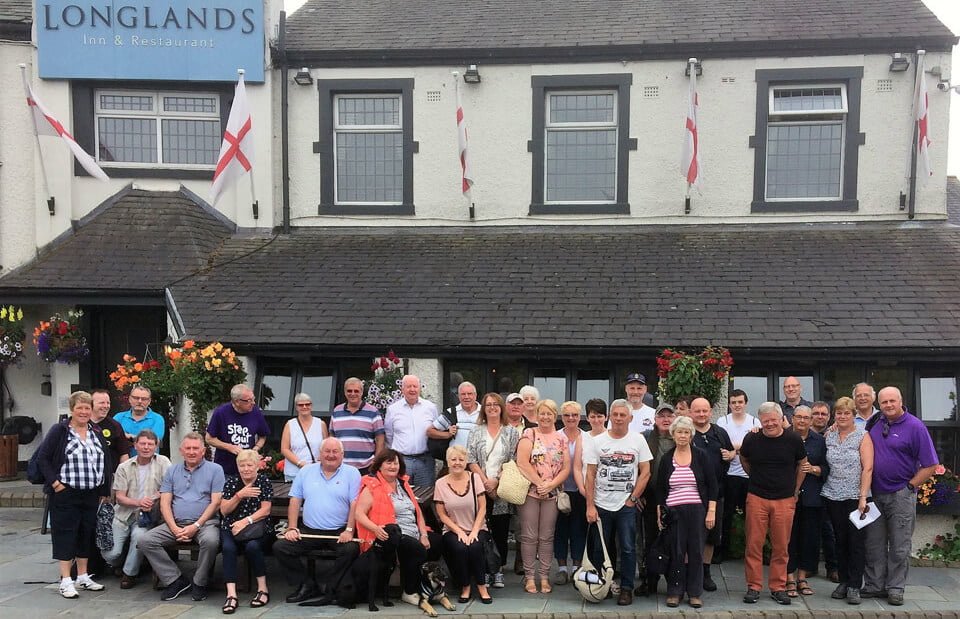 There is no shortage of canals and paths in the Wigan area, all within striking distance of the three Masonic halls in the Borough, but the group decided to make one of its MCF 2021 Festival fundraising events a special day out and opted for a sponsored walk along the Lancaster canal.

The group executive, fronted on this occasion by vice chairman David Ogden, being familiar with the area from his canal boating hobby, arranged a nine mile walk along the beautiful scenery the canal has to offer, craftily starting and finishing at a couple of nice pubs, with two more punctuating the way for those needing refreshment. Chris Reeman, group charity steward, was on the ball with his organisation, allowing a full coach to leave Bryn Masonic hall bang on midday, calling to pick up a special guest on route. Assistant Provincial Grand Master David Winder, the driving force behind the Provincial MCF efforts in his role of Vice President of the Festival, together with wife Sue, had opted to join the “Wiganners” and support the event.

Armed with Chris’s maps and instructions, the wayfarers arrived at the start point, the Longlands hotel, and were joined by many more brethren, partners and families who had made their own way there. Lodges and chapters from around the group were well represented, and much effort had already been put in with the circulation of sponsor forms and the collection of money, but today was about doing the necessary miles, and above all, having a really good time in the process. All objectives were achieved, with enthusiasm!

The full walk was nine miles, starting at the Longlands, passing a pub called the Canal Turn at about four miles, continuing to the Royal hotel about three miles further on. To complete the nine required a further trek to the Hest Bank Hotel and return to the Royal, a round trip of about three miles.

The distances were ideal, allowing for those less energetic to walk part or parts, with the coach regularly calling at the key waymarks to ferry people back and forth according to their ability, preference or choice. Some decided to come along and travel by coach from pub to pub to support and encourage the trekkers and enhance the atmosphere. Although fortunately not required, medical backup was provided afloat by David’s daughter Carol and her boyfriend Chris on board the family launch.

Those who completed the full walk did so in lovely sunny weather. Leading the charge, and completing the walk in a speedy time of just over two and a half hours, was Barry Dickinson with daughter Dawn and grandson Thomas, accompanied by fellow lodge member John Mason. For Barry it was an absolute pleasure to walk on the flat in fine weather, drink beer and share stories with friends, having just three weeks before completed a lone trudge from coast to coast up hill and down dale in some atrocious conditions. The contrast could not have been more stark.

The ‘après walk’ was superb, with good food, great company and an atmosphere fuelled by the sunshine and liquid refreshment. On the coach on the way back, David Winder took the microphone and was keen to congratulate everyone who had taken part and share his delight of being part of the donations and pledges of over £3,000 so far for the West Lancs 2021 MCF Festival.