There were so many things different about the emergency chapter meeting held at Bryn Masonic Hall. Firstly, proceedings commenced at 8:30 on a Saturday morning with a hearty breakfast. The chapter was meeting miles away from its official home. The car park was full of motorcycles. Many of the companions wore their regalia over motorcycle leathers. No festive board followed the meeting, and the companions ‘got on their bikes’ and rode away. Unusual to say the least, but perfectly normal once you know the story. 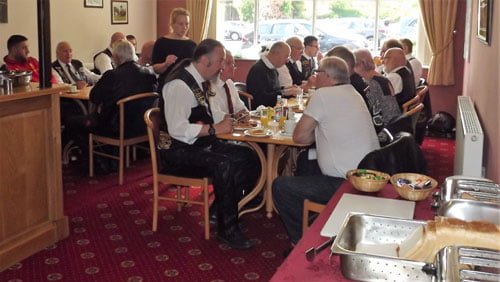 It all started about 12 months ago with conversations between Stanley Oldfield, (who, as no doubt you are well aware, is a Past Third Principal of the Province), and Andy Baxendale, a stalwart of the Widows Sons Masonic Bikers Association, with others who were all keen to form a Royal Arch Chapter that would attract like- minded companions and brethren with a shared interest in motorbikes. Andy is the President of the North-West Chapter (not the Royal Arch type) of the association and his fellow members all sport their leathers and official Widows Sons jackets and patches. Widows Sons was originally chartered in the USA in 1998 and now has 150 chapters across the USA and Canada, all being Masons, all being motorcyclists and all enjoying their hobby and friendships to raise money for charity. In the UK, there are now 14 chapters and are all recognised by UGLE.

It was around this time that due to falling numbers, Skelmersdale Waterloo Chapter No 1380, meeting in Southport, found itself facing the prospect of handing back its charter and ceasing to exist. The active membership had fallen to single figures and it was proposed to close the chapter in January 2017. The members agreed to keep the chapter after the installation in January 2017 in order for it to change direction. The opportunity was seized to save this historic chapter, (consecrated in 1926) and to embark on an exciting journey to find the bikers a Royal Arch home. Complex negotiations followed, and with help from Province, a myriad of logistical difficulties overcome, and the necessary changes to bylaws made, the chapter was allowed to move to Bryn and meet in its own peculiar fashion.

The three principals and companions (note the dress code), leathers allowed but with white collar and Masonic tie a must.

The Saturday was the first such breakfast meeting of the chapter at Bryn, starting from 8.30am with a substantial cooked breakfast, with orange juice, tea and coffee, at only £5. The Royal Arch meeting started at 10.30am, when five joining members were balloted for and admitted, along with two candidates for exaltation in September. At 12 noon, the bikers left for a trip to New Brighton and then to Chester via the Wirral, joined by some partners and not RA companions, who had been to breakfast, but obviously not to the convocation.

In the future, the chapter will meet on the third Saturday in May and September each year, starting with a breakfast at Bryn Masonic Hall followed by the installation in May and exaltations at the September meeting. There is no festive board after the meeting, the usual procedure being an organised bike ride in the afternoon.

Bikers may wear their leathers but must have a shirt with a white collar and Masonic tie. Membership is open to anyone especially those interested in motorcycling. Many of the members belong to the Widow Sons Masonic Bikers Chapter, which has an extensive programme of activities.

If anyone is interested in joining this Royal Arch Chapter, the next round of proposals for membership will be on 16 September 2017 with successful candidates being admitted in May 2018. Membership subscriptions for 2018 are proposed at £25. Any companion will be more than welcome to come to the meeting in September to take breakfast and watch the proceedings, you may well be surprised at how enjoyable this novel approach to Royal Arch Freemasonry can be. Full information regarding membership of this Royal Arch Chapter can be obtained from Andy Baxendale; (email andy.baxendale@gmail.com ). Andy is also a leading light in the Sons of the Widows Masonic Bikers Chapter and will be happy to provide any information to enquirers.

Biker companions with their machines at Bryn Masonic Hall.