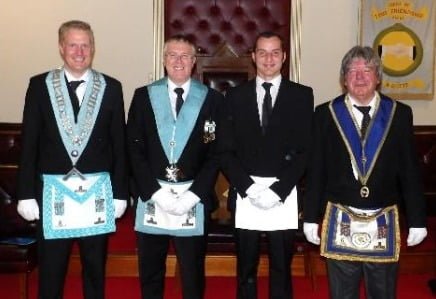 Ken Allen took the chair at Lodge of True Friendship in order to Initiate his son, Christopher Lewis Allen.

Lodge of True Friendship’s new Lewis In Freemasonry, we refer to the term ‘Lewis’ having two distinctive meanings:

1. A three-pronged iron cramp that is inserted in a prepared cavity in stone by which it may be lowered and lifted with precision.

2. The son of a Mason in England is called a Lewis, “because it is his duty to support the sinking powers and aid the failing strength of his father,” or, as the Rev George Oliver expressed it, “to bear the burden and heat of the day, that his parents may rest in their old age, thus rendering the evening of their lives peaceful and happy.”

The first we invariably see in lodge on the Senior Warden’s pedestal. The second we see at many lodges around the Province . . . the latest being at the very old Indian Lodge of True Friendship which, since the 1970s, has met at Stapleton. 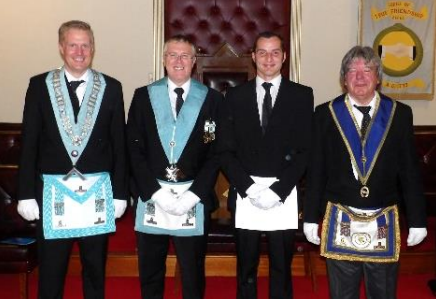 Past Master, Ken Allen, was permitted by the WM, Steve Carlin (left), to take the chair to initiate his son, Christopher Lewis Allen. Chris was seconded by his father-in-law . . . yet another ‘Lewis’ . . . . as in Tony Lewis (right).