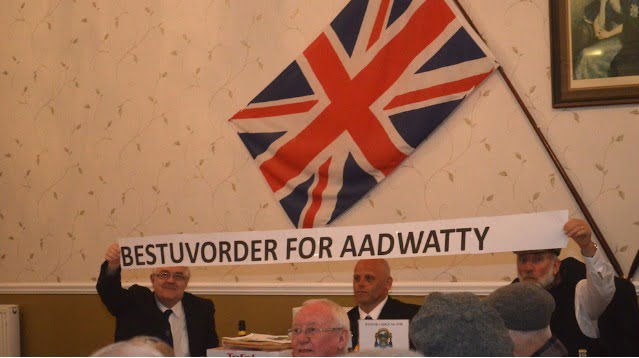 Ingham Street Masonic Hall South Shields once again hosted the Annual “Westoe Lodge Geordie night” on Friday 3rd June, which began with Seal Liam Carr being Passed to the Fellowcraft Degree. The brethren present could not fail to be impressed by the standard of ritual witnessed throughout the ceremony, highlighted by Gavin Loft Inner Guards delivery of the Working Tools.

The festive board began with a traditional Geordie supper including the obligatory Bottle of Brown Ale, Stotty cake and Peas Pudding. Everyone having enjoyed their meal were then introduced by the Acting Master to local Boy Scout Mark Ireland accompanied by his father.

Mark Ireland is the grandson of Derek Cuthbert, a Westoe Lodge member for many years, who sadly joined the “Grand Lodge Above” late last year.

Mark who is a keen scout and member of Boldon Explorer Scout Group was delighted to be selected to attend the World Scout Jamboree in Japan last summer as part of the Durham County Unit and had the honour of being the only scout chosen to attend from South Tyneside.

To enable him to fulfil this honour he had to raise £3,000 for the trip and undertook many fundraising activities in an attempt to acquire the necessary total. As part of his strategy it was suggested that he apply to Durham Benevolence for financial assistance towards the cost of his trip to Japan, and delighted when he was awarded the sum of £250 and agreed that he would come along to a Westoe Lodge Festive Board upon his return to give a brief account of his experience.

Due to the death of his grandfather, Derek, it has not been appropriate until now for Mark until this evening, where he gave an exceptionally well presented account of his experiences on the trip. Mark stated how appreciative he was of the support he had received from the Freemasons, made even more poignant by John Watts Chairman of ‘Durham Benevolence being in attendance’ to hear first-hand about his experience.

After the presentation he retired to an adjoining room where John personally congratulated him and spent some moments reflecting on the admiration he had for his late Grandfather and informing Mark that personal donations from Freemasons within Durham had been explicitly given with a view to assisting the Scout movement, of which he was a benefactor.

Back at the Lodge festive board it was now time to issue the boiled eggs ready for the for the Jarping Championship, for those of you not familiar with the competition, briefly explained consists of individuals lining up against their chosen opponent, with one heard to say “I’m Ganna Jarp Ye!” then holding his egg in one hand bashes the other opponents egg, the egg that cracks is the loser.

There were several former Champions unable to attend this year, with rumours circulating that the stringent dope testing regime set up this year by I.D.J.A. “International Dope Jarping Agency” being the main reason for several high profile withdraws. The eventual winner came from within the Province of South Shields in the guise of “2 Eggs Stephenson” who post competition declined to offer an explanation for slipping a second egg back to Bro David Bambrough.

Ian Wylam Turnbull, script writer extraordinaire continued the frivolities with the “Geordie History Lesson on Use of Phrases” with Rak Bhalla winning the event having translated and repeated some 8 Phrases unique to Tyneside held aloft by the brethren on the top table.

Upon the arrival of King Wattlered at the annual state opening of Laygate Parliament in AD 1177, the usher was reputed to have used this plaintive cry “Bestuvorder for aad Watty”

In modern times it is used to gain the attention of an assembled company before the commencement of the turn down at the Club.

It basically means, shut up, sit down, (or stand up, whichever is appropriate) and pay attention.

Ian in his role as Charity Steward notified the Lodge of Provincial updates for both the 2021 Festival and that of the very fast approaching Raby Gala and the latest Initiative of the Sweetie Appeal, prior to presenting John Watts with a set of Tap Washers in an attempt to repair the Provincial Grand Masters well publicised dripping Tap !!!!

Finally with the evening drawing to a close and Peter Maughan not in attendance Paul O’Doherty was requested to ‘Lend a Hand’ possibly on the basis of being of similar stature to that of Peter for:- a re-enactment of: – ‘The Ancient Ritual for the Appointment of a Charity Steward’

This involved being invested with the working tools of an Ancient Charity Steward, consisting of a Collar to which is attached a Galvanised Bucket, a Raffle Book, Black Bag containing Bingo Balls, cloths Pegs and plyers each coming with firm instructions as to their separate and conjoined significances.

Well done Westoe and we all look forward to “Gannin” again next year.