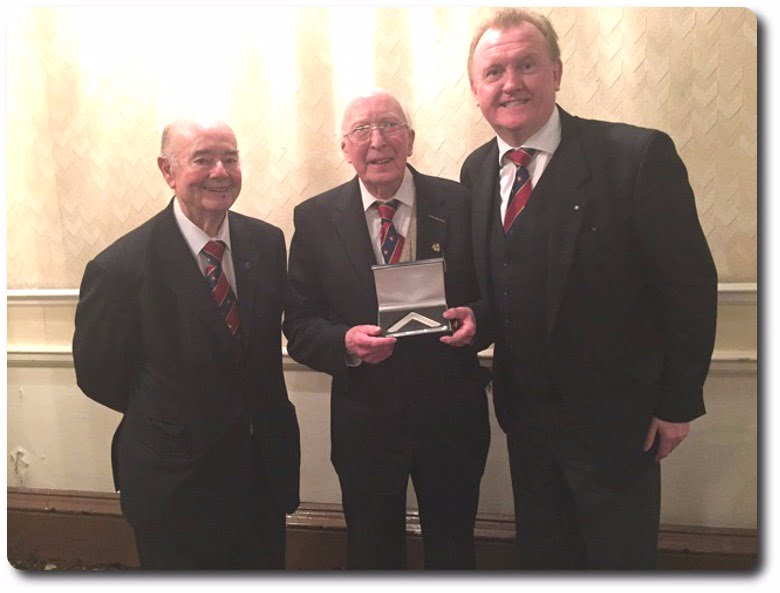 On admittance, the Deputy Provincial Grand Master was offered the Gavel of the Lodge by the Worshipful Master who was also the celebrant!  On receiving the Gavel,  VWBro Thornhill said, “he was very happy to accept the Gavel and how delighted he was to be here to honour a man who has given 60 years to East Lancashire Freemasonry”

Extracts were read  from the minutes of Jack’s Initiation Ceremony held on 24 January 1956 and his Installation as Worshipful Master on 13 December 1969 by the Lodge Secretary, WBro Michael Isherwood PProvDepGDC.

WBro Rodney Evans PProvJGW  then delivered a personal tribute to his old friend on behalf of the Lodge.  He informed the Brethren that Jack had held many offices in the Lodge, all of which he carried out with great distinction.  Jack is also a skilled Carpenter, having made and repaired many of the wooden Lodge furnishings.

WBro Borrett was involved in many Campaigns, having served in North Africa, Monte Casino, Greece and  Macedonia.  On being demobbed he became a Nurse at Cheadle Royal Hospital where he met his wife Evelyn and they had a daughter Jill.  Sadly Evelyn passed away in 2003.  WBro Evans described Jack as a very warm and friendly man with a great sense of humour and a true gentleman. 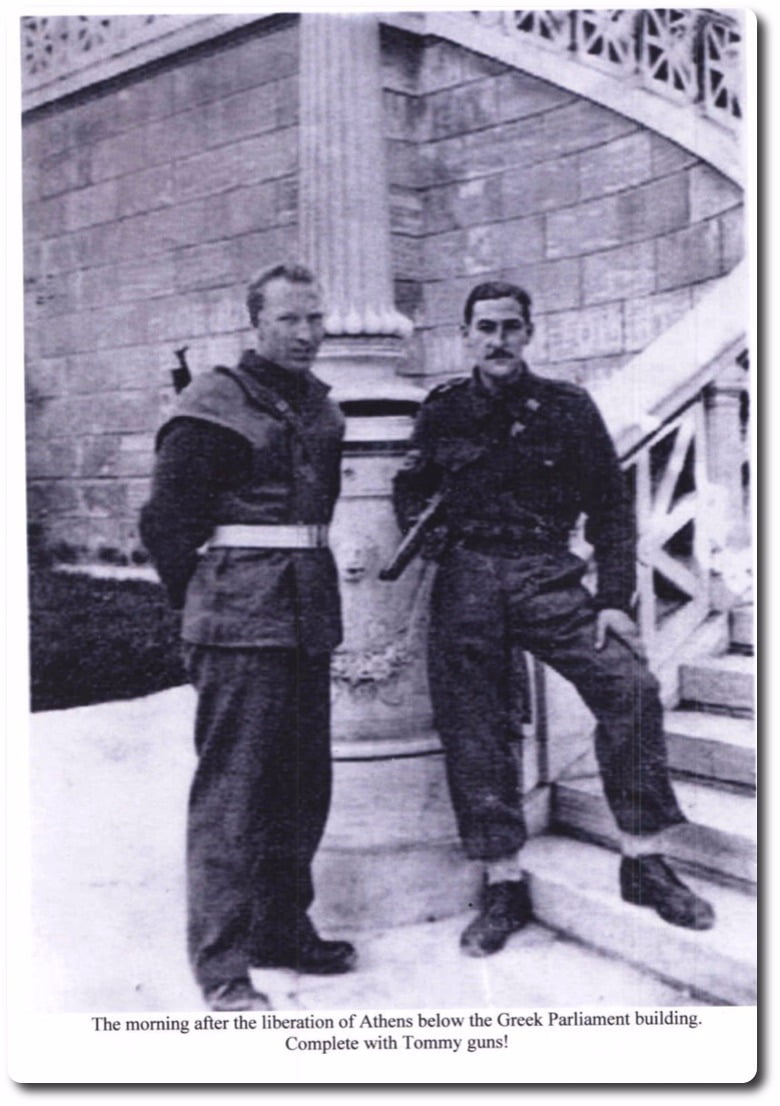 VWBro Thornhill proceeded to inform and entertain the Brethren.   He reminded everyone of what life was like in 1956.  Granada TV was launched, President Nasser nationalised the Suez Canal leading to War, Premium Bonds were introduced, the average house cost was £2,280, the average pay was £615 pa and petrol was 4/6 a gallon. Famous sports people born that year include Sebastian Coe, Sue Barker and Martina Navratilova, Manchester United won the League and Manchester City the FA Cup.

A personal letter of congratulations from Sir David Trippier, RW Provincial Grand Master was read out in open lodge, together with a richly deserved Illuminated Certificate to mark this very special occasion by VWBro Thornhill, who concluded the evening by adding his own personal congratulations and stated how pleased and privileged he was to be present.

WBro Borrett was then perambulated  around the Lodge room by the Deputy Provincial Grand Director of Ceremonies WBro David Cowen to the acclaim of the brethren and on conclusion was presented with a Sixty Year lapel badge on behalf of Sykes District by the District Chairman WBro Chris Prax.

At the Social Board, WBro Borrett was presented with a silver square and compasses by WBro Rodney Evans. 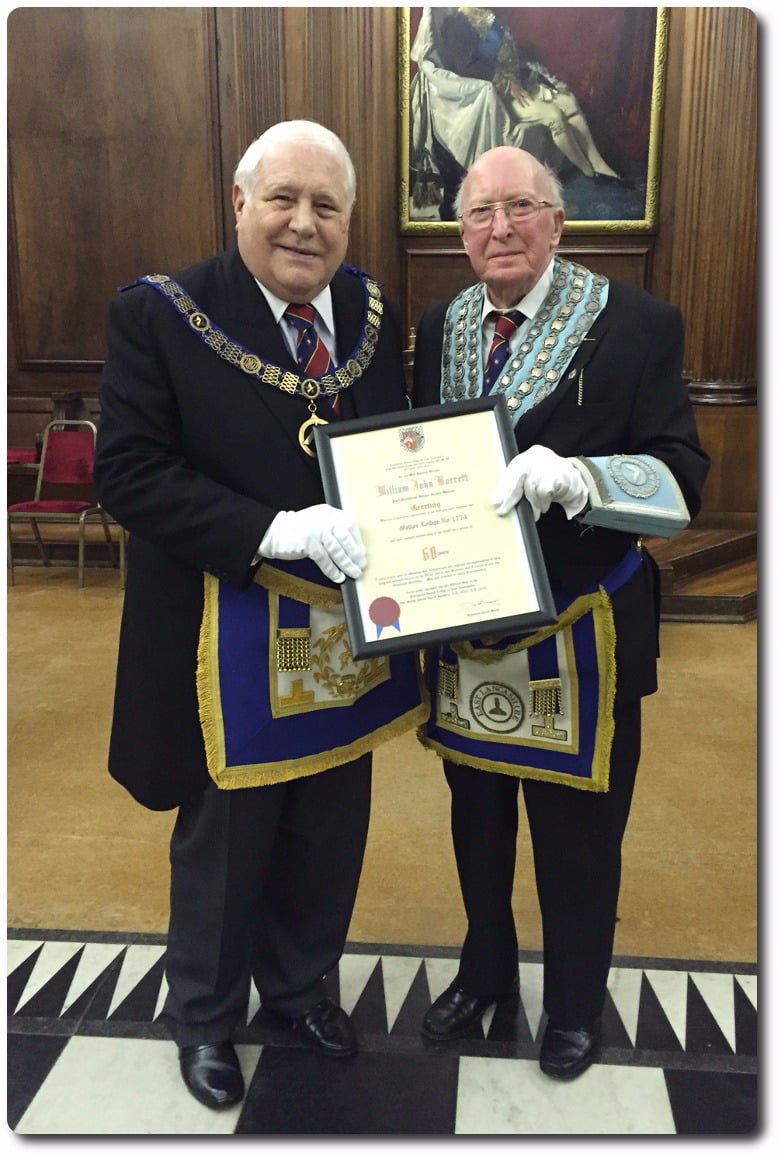 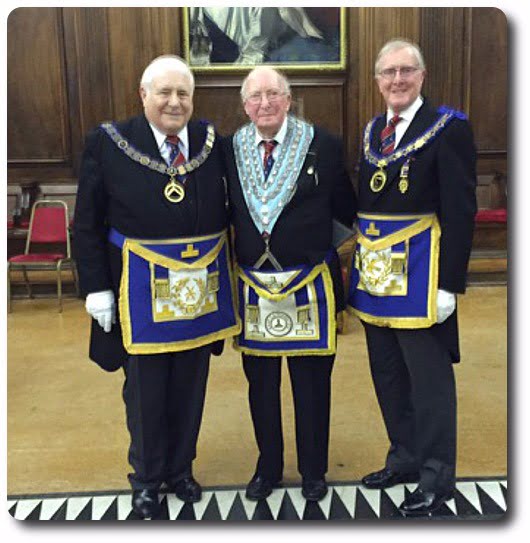