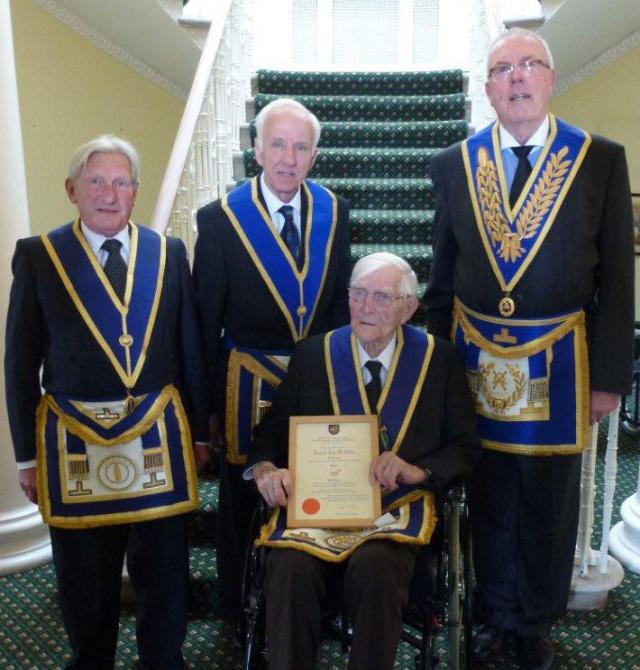 WBro Richard McMillan formerly of Sandbach, Cheshire, celebrated his 100th birthday at the Prince Edward Duke of Kent Court RMBI Care Home at Stisted near Braintree, Essex where he resides with his wife Ethel.  Forty members of his family joined him at the Stisted Home to help celebrate his birthday.

WBros Bill and Robert from Penda Lodge No 7360, Sandbach attended the family party to present the 100th birthday certificate on behalf of the Cheshire Provincial Grand Master, RWBro Stephen Martin Blank.  Richard was both surprised and honoured to receive his certificate.

WBro Richard was initiated on the 17th June 1972 into Bernicia Lodge No. 4479 in Seaton, Northumberland, he then moved to Sandbach, Cheshire and became a joining member of Penda Lodge No. 7360 where he was heavily involved with the development and improvements of the Masonic Hall building. He was an active member of various orders in Masonry and even when senior in years, he was still able to deliver parts of the ceremonies.

He was also a prominent member of the local Alms Houses which he continued well into his nineties. He was sorry to leave Sandbach and his Lodge in Cheshire, but as all his family lived in Essex or thereabouts, it seemed best for both he and his wife to reside in Stisted where they are now both happy and safe.