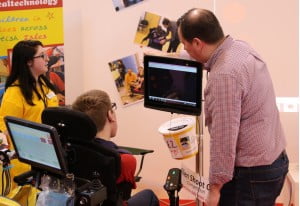 Through the magic of technology, Lifelites gives life-limited and disabled children in hospices opportunities they wouldn’t otherwise have. They provide specialist entertainment and educational technology packages for these young people to learn, play, be creative, control something for themselves and communicate – for as long as it is possible. This is done for 9,000 children at every baby and children’s hospice across the British Isles. For the brethren of Warwickshire, this mean Acorns here in Birmingham and Zoe’s Place in Coventry. Lifelites began in 1999 as a Millenium project with the Royal Masonic Trust for Girls and Boys before becoming a stand-alone charity in 2006.

The Chief Executive of Lifelites, Simone Efener-Doy, was delighted to be offered a free stand at the recent Gadget Show Live at the NEC. Whilst able to bring a number of staff up from head office in Great Queen Street, they realised that they would need help in raising their profile over the four-day show. This is where the brethren of Warwickshire came into their own with a number volunteering to give of their time to assist on the stand.

As well as providing information about their work, Lifelites was able to demonstrate two major pieces of tech. Firstly, there was the Eyegaze system that simply works by following the movement of a child’s eyes. Costing around £3,500 it has transformed the lives of many severely disabled children. They also had the magic carpet that was a big draw, especially to the youngsters attending the show. This is a clever system which projects images onto a mat with which a child can interact. The football game was running much of the time and, as expected, it did prove quite a draw. 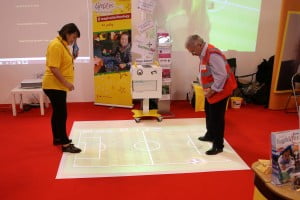 Football on the magic carpet 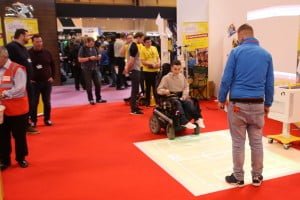 Fun with the magic carpet

The great thing about having a presence at such a show was that Lifelites was able to talk with people from all over the British Isles, hopefully leaving many with a greater sense of what it does for their local children. As well as giving out freebies – one well-known Mason who is a retired dentist was in charge of the bucket of lollipops, chocolates and crème eggs!! – visitors could try their hand, or rather eyes, at blasting space aliens using the Eyegaze system. As previously mentioned, many were also keen to have a game of football on the magic carpet. They were also welcome to make donations and over the course of the whole show, an amazing £935 was collected. This was augmented by the Lodge of Integrity, which supported Lifelites at their regular meeting that fell on the Saturday of the show and W Bro Simon Grove, Integrity’s Charity Steward, was delighted to present Simone with a cheque for £200. 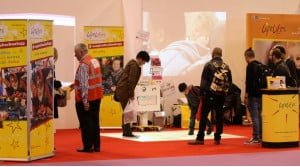 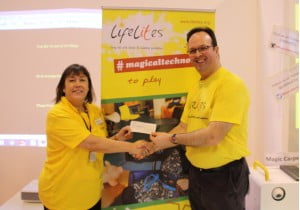 W Bro Simon Grove presenting Simone with a cheque for £200

The catch line of Lifelites is ‘Giving kids with limited life unlimited possibilities’ – those Warwickshire brethren who were able to help can be justifiably proud of helping a such a worthwhile charity continue its fine work.

For further information on this important work, including details of the Ambassadors programme, visit www.lifelites.org and have a look at the Lifelites website.