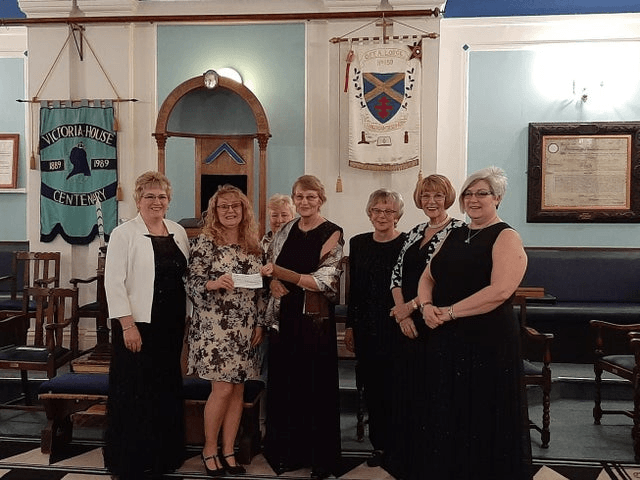 Safeline, which helps and supports those affected by sexual abuse and rape, recently received a donation from the Order of Women Freemansons Lodge 159.

Rachael Stevens, Safeline’s development officer, attended the appointment of the new Master at Offa Lodge in Leamington last Saturday, to receive a cheque for £559.

This is the second year the ladies of The Order of Women Freemansons Lodge 159 have chosen to support Safeline with their fundraising.

Their total over the two years is stands at £917 which is a massive support for the much needed work of Safeline in and around Warwickshire area.

Renee Warner, the outgoing Worshipful Master, who nominated Safeline said: “I was pleased to choose such an important local charity and support the wonderful work Safeline do.

“Charity is one of the founding principles of Freemasonry, central to everything we do. I hope we will have helped raise their profile and highlighted the good that Safeline does.

On accepting the cheque, Rachael Stevens said: “Thank you so much to Renee and the ladies from The Order of Womens Freemasons Lodge 159 for their amazing support over the past two years.

“We cannot offer the services we do to our clients without help and support from organisations like these.

“Safeline really do appreciate the support from the Free Masons – The gentlemen from Guys Cliffe Chapter Rose Croix No 877 have donated £100 to Safeline following their recent Sunday lunch.

“A huge thank you to Peter Bailey, Phillip Rothwell and the rest of the lodge for thinking of Safeline with this kind donation.”

Rachael is due to part in the charity firewalk on June 6 as part of the Provincial Grand Lodge of Warwickshire’s Coombe Abba festival weekend.

Rachael said: “There is plenty of family fun over the whole weekend. Thank you Paul Regan for allowing us to join in this fundraising event.”

If you are interested in sponsoring Rachael for her part in the firewalk, go to: http://www.justgiving.com/rachaelstevens26for26