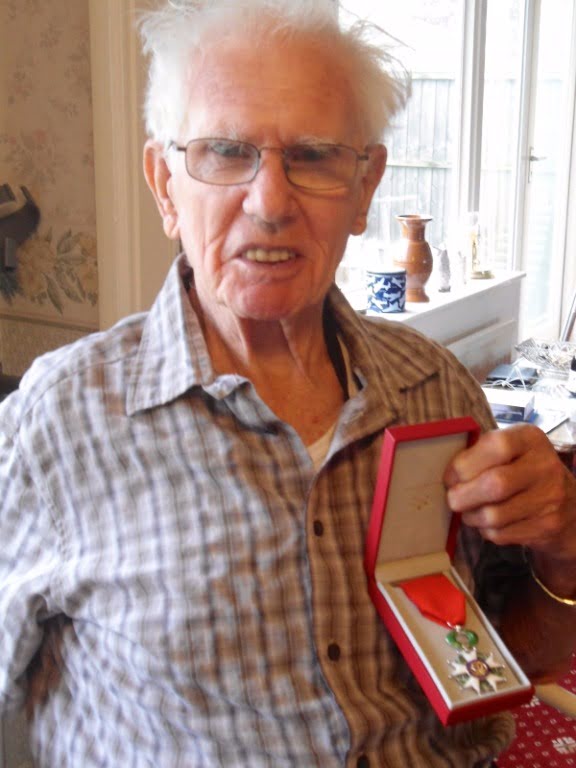 W.Bro. Walter Greenwood, a Past Master of Commercial Lodge No.1391 which meets in Leicester, has recently received the Legion d’Honneur Medal presented by the French Government for his contribution to the liberation of France during the Second World War. The Ordre national de la Légion d’honneur is the highest French order for military merit, established 1802 by Napoléon Bonaparte.

Bro. Wally joined the RAF in 1943 at 18 years old and chose to train as an Air Gunner in preference to either a Flight Engineer or Wireless Operator. His initial training was based on Wellington and Sterling Bombers before converting to Lancaster Bombers and was duly assigned to 106 (Bomber) Squadron based at Metheringham, Lincolnshire.

Wally recalls: “On arrival at the Squadron we were all put in an aircraft hangar and instructed to sort ourselves into crews over a three day period. It was naturally essential that the individuals in a crew got on with each other and I agreed to join a crew after meeting some fellow recruits in a pub.”

He began operations soon after and was very actively involved in supporting the D-Day landings. The instructions were to drop the bombs and then fly into France before turning for home, thus avoiding aircraft on following missions. Wally said: “I clearly remember spotting and being attacked by Fokker Wolfs at which point I, in no uncertain terms, told my pilot to fly into the clouds and make a quick turn to escape.”

In total, Wally completed a total of 34 operations with several entries in his log book detailing when they were hit by flak (anti-aircraft shell fire). The 106 Squadron lost a total of 59 Lancaster bombers by the end of the war with the loss of over 1,000 airmen.

Wally subsequently transferred to training and it was during one of the training sessions when the Wellington bomber he was flying failed to take off correctly. Wally’s quick reactions enabled him to jump out and roll off the wing to safety albeit suffering with two fractured hips. Sadly, the rest of the crew did not survive.

He was invalided from the RAF as a Flight Sergeant in 1944 and completed his civilian life as a plumber. Bro. Wally was initiated into Freemasonry in 1962 and was Master of Commercial Lodge in 1978. He was promoted to PPJGW in 2004. He was Exalted into Royal Arch in the Granite Chapter No.2028 and was MEZ in 1986.

Wally’s survival during the war was, as he puts it, “down to having a good pilot” but he thoroughly deserves his appointment to Chevalier de la Légion d’honneur having risked his life to secure France’s liberation during the Second World War.