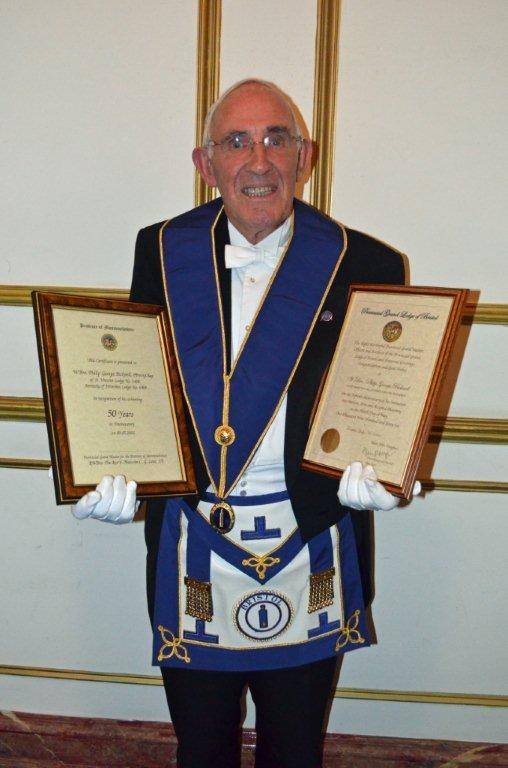 W Bro Philip George Bicknell, was born on the 28 October 1939 at Pontypool, Monmouthshire. He was educated at the local grammar school in Pontypool, and moved on to Cardiff University where he qualified as a doctor in 1962. He finally retired in 1999.W Bro Philip’s Masonic career began on the 9 May 1966, when he was initiated into the Trevethin Lodge No 6008, in Monmouthshir.

As W Bro Philip’s mother lodge was in Monmouthshire, he continued his Masonry in Bristol and visited The St Vincent Lodge, on many occasions, eventually being persuaded to become a joining member.

However, due to his surgical and family commitments, he was unable to progress and after he retired 1999, he was Installed as WM of The St Vincent Lodge No. 1404, in 2002.

The meeting at which he celebrated his 50 years in Masonry, was held at The St Vincent Lodge meeting on the 26 May 2016 and was attended by many visitors. Not least of these were a group of members from Trevethin Lodge from Monmouthshire, who were accompanied by the PGM for Monmouthshire, RW Bro., the Reverent Malcolm Lane and the Deputy PGM, VWBro Jon Howe-Davies.

After the ceremony, the PGM for Bristol, RW Bro. Alan John Vaughan, outlined the life and Masonic career of W Bro Philip, before presenting him with a framed 50 year certificate and a Bristol commemorative lapel pin, to mark this milestone in his Masonic life.

W Bro Philip then took the opportunity to thank the PGM for Bristol and the DPGM and PGM for Monmouthshire, for their very generous tributes to him.

A truly enjoyable evening and a Milestone in the life of W Bro Philip George Bicknell.