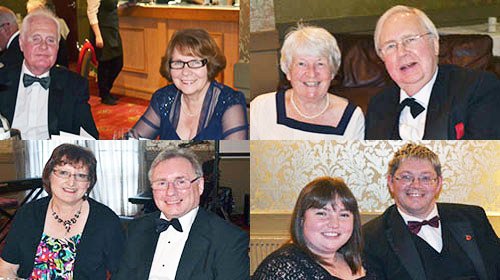 Members of Vale Lodge No 5256 held a very successful evening at the Longlands Hotel, Tewitfield, near Carnforth to celebrate and honour ‘The Ladies’. The WM of the lodge Bill Byrne and the principal guest, his wife Ela, were delighted to welcome fellow Masons, family and friends to their special evening, which was orchestrated with precision and humour by the lodge director of ceremonies Norman Mitchell.

Bill and Ela Byrne (top left) and some of their guests.

Following a truly magnificent banquet the toast to the ladies was proposed in his inimitable style by the junior warden George Fox, to which Ela gratefully acknowledged in her reply and in turn thanked the numerous people who had contributed to making the evening such a success.

After the speech the guests were treated to a superb rendition of the ladies song by George Fox who was accompanied on the keyboard by David Tattersall. The evening’s entertainment and dancing was then in the hands of ‘Quay Change’, a jazz, swing, Latin and blues band, whose performance ensured that the evening went with a swing.

A total of £165 was raised for good causes on the evening.