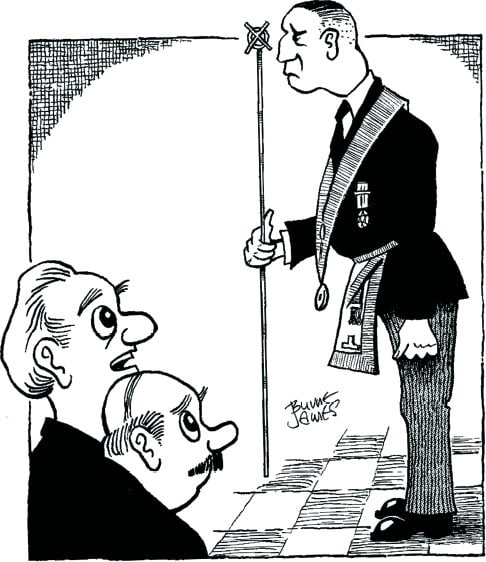 Within the workings of The English Constitution the commonplace word ‘slipshod’ is understood by everyone.
The dictionary definition is interesting and worth reproducing: “may imply an acceptance of the shabby, worn out and imperfect. Something unsound and inexact that had the conscientious craftsman’s contempt”

If this is the case – then the term and the practice is singularly inappropriate! Actually, the terminology is at fault here. In many Constitutions the term used is ‘the rite of discalceation’ from the Latin discalceatus, meaning “unshod” or “barefooted”.

A candidate for Initiation into a Masonic Lodge often finds odd those requirements that he must fulfil in order to do as all good brothers have before him. Indeed, that preparation often remains a puzzle to him, since the ritualistic explanation remains virtually non-existent.

Not always does the new-made brother, bewildered by the new world into which he is thrust, investigate further to learn a deeper meaning to the ceremony through which he has just passed.

In some workings of the ritual, help is at hand in a quotation from the Book of Ruth, Chapter IV, verses 7&8 :
Now this was the manner in former time in Israel concerning redeeming and concerning changing, for to confirm all things; a man plucked off his shoe, and gave it to his neighbour: and this was a testimony in Israel.

Therefore the kinsman said unto Boaz, buy it for thee. So he drew off his shoe.”
‘Redeeming’ here means the taking back or the recovery of land or property pledged as a debt. ‘Charging’ refers to the transfer of ownership.

As both were then, as now, matters of importance, it is evident that the act of plucking off a shoe was a pledge of honour and fair dealing, was of equal importance, compared with our practice today with our swearing to our signature to documents before a Commissioner for Oaths.