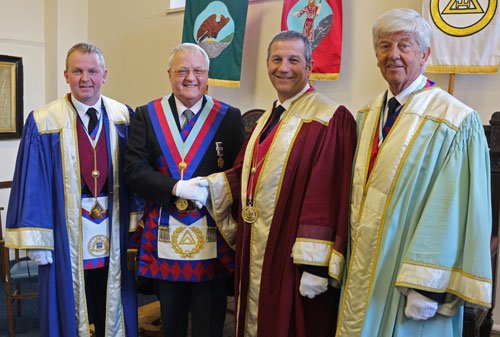 Bill (second left) congratulates the three principals on their installation.

After conducting the administrative business of the chapter the first principal, Mel Cross, welcomed Bill into the chapter. In return, Bill acknowledged his kind words of welcome saying he was looking forward to an enjoyable evening as a guest of the chapter.

The installation ceremony was shorter than normal as the second and third principal elects had served in their respective offices on a previous occasion. The acting DC Gordon Pilkington started the proceedings by presenting the third principal elect Ray Taylor for installation. The third principal, Bob Pye proceeded to remind Ray of his duties and following reaffirmation of his obligation, the scripture reading was given in an excellent manner by Gordon. Bob Pye, as second principal elect, was in turn presented for installation. The second principal, Gary Norris, proceeded to remind him of his duties and following reaffirmation of his obligation, was duly placed in his chair of office. In this instance the scripture reading was delivered in an equally eloquent manner by Martin Slater.

Finally, Gordon had the pleasure of presenting Gary, as the first principal elect, to the first principal Mel Cross who informed Gary of his impending responsibilities and Gary confirmed his willingness to accept the position. Gary recited his obligation and was conducted to a place in the chapter. In this instance the scripture reading was given by John Fadden, again delivered to a high standard. Those below the rank of an installed first principal were requested to retire from the chapter for a short period. A conclave of installed first principals was declared and Gary was acquainted with the secrets of the first principal’s office and duly installed in his chair. The conclave was closed and companions invited to return. For the benefit of the returning companions, Gordon declared the three principals as now being in office. The associated prayers for all three offices were delivered by the chapter ADC Jim Gibson. The scarlet robe address was given by Mel Cross, the purple robe address by Gary Norris and the blue robe address by Bob Pye, all of which were delivered to the expected high standard.

At the conclusion of the installation ceremony, Bill brought the congratulations of the Grand Superintendent Tony Harrison, wishing the three principals well during their year in office. He hoped they would soon have some work to do by the way of candidates. He continued by also congratulating Mel Cross for his part in installing his successor as first principal, thanking him for all the work he had done for the chapter and the Royal Arch during his year in office. He concluded the good wishes of Tony Harrison by congratulating all the companions of the chapter who had taken part in the installation ceremony.

Gary then had the pleasure of presenting Bill with a cheque to the value £113 in support of the West Lancashire Freemasons’ Charity. Bill, in receiving the cheque, thanked the chapter companions for the donation and their generosity, noting that the amount donated was similar to the chapter number.

Later in the evening, in response to the toast to the grand officers, Bill brought his own congratulations and those of fellow grand officer Stan Rigby. He wished the principals good health during their year in office, a year that he hoped would, to the benefit of Unanimity Chapter, include plenty of work regarding new members. He congratulated Gary on achieving the first principal’s chair and thanked Bob Pye for all the support he gives to the chapter, having previously served as first principal on three separate occasions. Similar thanks went to Ray Taylor for his support, who having served as ADC for a number of years, has returned to the third principal’s chair. Continuing with his congratulations, he particularly mentioned the work of the installing first principal, Mel Cross and all the companions who had a part to play in the evening’s ceremony. He thanked the companions for the charitable donation made earlier, a donation that would be faithfully applied in due time.

Bill continued by implying that the Royal Arch is perhaps not fully appreciated by some of the Masonic brethren. He emphasised the need today to engage the enthusiasm of the companions by possibly enhancing the ceremonial ritual. He mentioned the various demonstrations of enhanced ritual that had taken place round the Province, enhancements that were designed to add to the understanding of the ritual and thereby instil further the confidence of the candidates. He urged the chapter to seriously consider adding some or all of the suggested enhancements to their ritual. To further promote the Royal Arch, he indicated that there was to be another ‘Talking Heads’ presentation for the benefit of Craft Masons who have yet to take that further step. He informed the companions that the presentation has been scheduled for the November 2016 meeting of Festival Lodge No 8123 and strongly encouraged the companions to give it their support.

Bill went on to thank Steve Bolton for his invitation to attend as the principal guest for the installation meeting of the chapter. Thanks also went to Stan Rigby and acting officers Paul and Gowan for their support on this important occasion for the chapter.

He concluded by thanking all the companions of Unanimity Chapter for their generous welcome with particular thanks going to chapter scribe Ezra John Fadden, for all the information he had supplied in advance of the meeting. He was particularly pleased to be reminded that the address to the companions, usually given by the principal guest, was not part of Unanimity ritual.