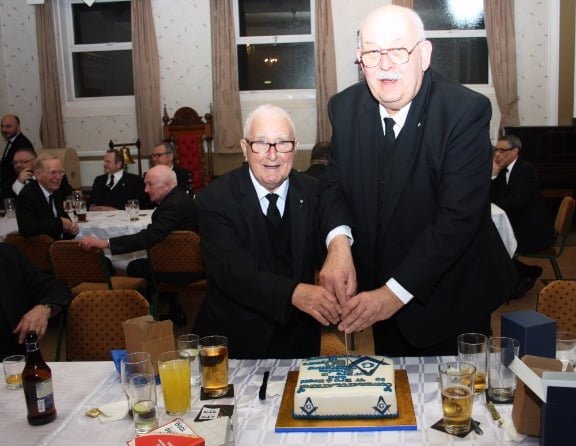 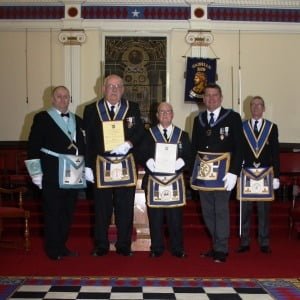 John Watts had a busy night in South Shields, on Tuesday 3rd May, presenting two certificates to recognise 50 years of membership to two members of Hadrian Lodge. The evening was made even more special by the passing of two apprentices, one of whom was a member of Eardulph, the fraternal visitors from Chester-Le-Street.

Stephen Rhodes and Albert Scott received their well-deserved certificates from John before the Worshipful Master, Ronnie Amar, handed over the gavel to John Watkins to conduct the ceremony, some nine years after his last such performance, as part of the Past Master Team selected for the Past Masters Evening.

It was pleasing to see the room full to witness the presentations and the passing of Paul Hogg and Frank Killin of Eardulph.  Paul had made an especial effort to attend despite quite obvious pain caused by a recent road traffic accident as he was desperate to take the next step in is Masonic career, one that could only be encouraged by seeing the pleasure it has given to Stephen and Albert over the last 50 years.  Former Billingham Stars ice hockey player Frank will have been unaware of the subtle differences with his lodge ritual, although it must have felt like being at home anyway seeing as how some 17 brethren had made the effort to travel across from Chester-le-Street to support him.

Ronnie resumed his place in the chair before heading downstairs with some trepidation in expectancy of a difficult conversation with the hall cook, having told him earlier that a maximum of 40 would be dining, who then had to somehow make provision for another 11 settings.

The evening continued in fine style with Ronnie presenting some whisky and a bespoke cake to the two elder statesmen who both took the opportunity to reply and summarise their feelings about how much they have enjoyed their time in freemasonry and how glad they are that they took that first step 50 years ago.

Neither of them was actually initiated into Hadrian but they are both very happy to have ended up in a lodge that gives them so much and which they look forward to attending each month.

Stephen, 73, started off in Old Bromsgrovian Lodge in his home county of Worcestershire.  Consecrated in 1938, Stephen joined in 1966 and met all but two of the founding members who were still around by then.  As his work varied, moved or temporarily stopped he had to make financial decisions that caused him to leave and join some seven lodges/chapters before relocating to the North East, his wife’s home region, and joining Hadrian.  Stephen met his wife on the top of an Italian mountain and is a founder member of the British Ski Club for the Disabled and after 15 return visits and despite her being blind he is proud to admit that she ended as a better skier than him!  Stephen is due to return to Bromsgrove at the end of May to receive his 50th certificate in his mother lodge but is keen to come ‘home’ to a friendly area he has been made to feel most welcome to live in. 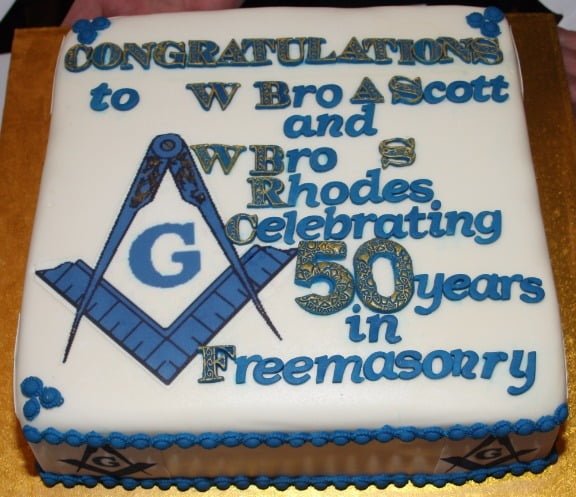 90 year old Albert enjoyed a long and varied working life, starting from school in a butcher’s shop before heading off at the controls of a horse & cart delivering milk, then a spot of sheep farming and then serving his time in Scotswood as an electrical fitter for a lift company.  Albert moved on to work for Marconi in Bill Quay, travelling extensively to work on radar stations with particular memories of time in Germany which allowed visits to the famously raided dams and the Nurburgring where he watched Sir Stirling Moss one day.  Not quite settled yet, Albert spent ten months down a mine before ending his working days with 30 years in control of a fish shop.  Albert also has had variations in his Masonic career, being a member of six lodges but just the one chapter.  Albert’s Masonic life has helped to ease the pain caused by the death of his wife eight years ago.  Like so many of his generation, they met at a dance hall, the Boldon Miners’ Hall.

The attendance was made up of 30 members and 51 visitors who represented some 23 lodges and Hadrian stewards must be commended for accommodating everyone so admirably.

John’s commentary summed up the evening nicely, “What do Province ask of lodges?:- numbers, the bus-full from Chester helped; help each-other, passing a fellowcraft from another lodge; enjoy – 81 nods to that last one.