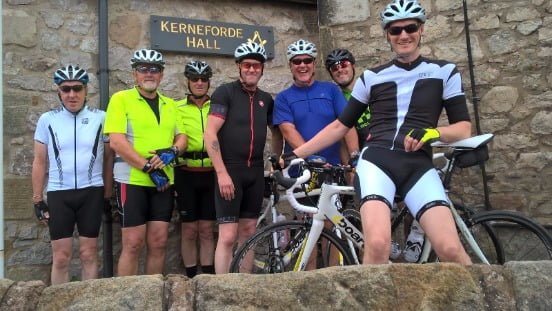 “I’ve got a great ambition,” wrote the Scottish Philosopher Thomas Carlyle, “to die of exhaustion rather than boredom.” Such might also be said for the dauntless South Fylde cyclists who set off from Hope Street, Liverpool, aiming to reach the Masonic Hall at Barrow-in-Furness in just two days. Several vicissitudes later they had proved that it could be done.

Day one started well with a nice ride to Southport Masonic Hall, where coffee and refreshments had been arranged. With energy reserves topped up it was off to Tarleton on the second stage of the route. The sky by this time was beginning to look distinctly angry. Low dark-grey clouds brooded overhead and the team were glad to reach the Olive Tree café at Tarleton with moments to spare before the inevitable downpour ensued. A hearty lunch was required to build up fortitude and resolve before launching into a very wet West Lancashire 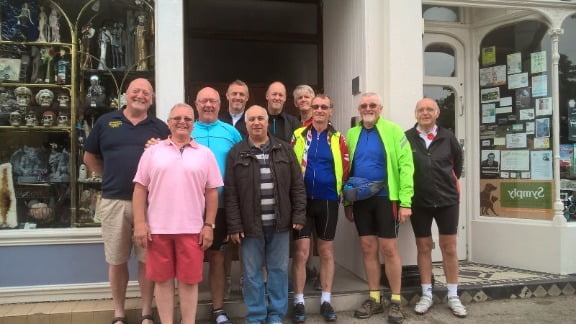 Despite the inclement weather things were going well until a potentially dangerous, even life threatening event occurred. While traversing the cycle way between Tarleton and Hutton, Tony Farrar took flight across the bonnet of a Post Office van that had appeared from nowhere. By the aid of luck and some acrobatics worthy of an Olympic athlete, Tony picked himself up and pressed on regardless. It has to be said that Tony is made of a robust constitution. The previous week he had picked up a football injury resulting in very serious bruising to his foot. Such an injury would probably have curtailed the cycling ambitions of a mere mortal but Tony is obviously made of sterner stuff. He must also have a strong sense of humour, as his fellow riders nicknamed him ‘Blackfoot.’

Preston was finally reached, despite near blinding rainfall and a much-needed breather was taken. The last section of day one beckoned and the intrepid team set off with a very soggy determination. Until now, nobody had dared to mention an underlying expectation, then the inevitable happened, Ian Ward’s bike developed a punctured wheel. It was said of Ian before the ride commenced, “he always gets a puncture” and he duly did. He deserves a special mention for completing this ride on his bike. You could describe it as “retro” compared to the carbon fibre, low weight, high specification, 21st century steeds being used by everyone else. The weight and gearing of Ian’s bike probably meant he did the equivalent of another 20 miles on top of everyone else’s trip.

Ian’s predicted puncture was time consuming but a basic hazard for cyclists and didn’t diminish the joy and enthusiasm of the waving and air punching as the riders rode into Garden Street, St Annes. An air of quiet optimism pervaded the chat and the banter, as bikes were carefully stored into Liam Bird’s van. It was time to rest and reflect on an eventful first day.

Day two dawned with much more blue in the sky, with Ian Ward singing the blues having discovered another puncture before the ride resumed. With much help and advice, the offending inner tube was replaced and the team peddled around the corner to Poulton le Fylde Masonic Hall. Here they posed for more photos before setting off for the ‘Stork’ public house near Glasson Dock. Good time was made on this section and carbs and sugar were supplied in the form of shortbread biscuits provided by Assistant Provincial Grand Master David Winder but more particularly by his wife Sue providing a very inviting plate of goodies.

Morecambe Masonic Hall was the next stopping point and further good riding was achieved without mishap. Although road works prevented the support vehicles arriving at the hall, a quick breather was taken before pressing onto the lunch stop at the Bay Crossing Café at Hest Bank. As further good time had been made a slightly longer break was taken before setting off for the Lake District, where the inclines became a little steeper. Taking a short breather at Kerneforde Hall at Carnforth, the intrepid riders still excelled, arriving early at Grange Over Sands, catching some of the support team enjoying tea and cakes at a local café (for shame!).

Pressing on into the stunning Lakeland scenery, the weather still defying the dismal forecast with warm summer sunshine, the progress was still encouraging. Ulverston found everyone arriving 15 minutes early. As the cyclists arrived Tony Farrar was advised to keep to the right hand curb, as there was a Post Office van depot across the road from the masonic hall! Chocolate bars, bananas and energy drinks were much in evidence at this penultimate stop, preparing for what proved the most grueling section of the event, due to the very severe gradients which now had to be traversed. They set off onto this last lap with determination and spirit, then the inevitable happened, another puncture. Not, surprisingly to Ian Ward on this occasion. ‘I never get punctures Dave McKee’ discovered a very flat tyre not 500 yards around the corner. This held things up a bit and dulled Dave’s usual ebullient spirit and lively sense of humour. However, new tube fitted a concerted push onto the finish ensued. Ultimately, the other inevitable event occurred, it started to rain. Well, this was the Lake District after all. Despite his earlier fix, Dave McKee developed another flat tyre but this was again dealt with and all starters were cheered home at Barrow Masonic Hall in the rain.

As the riders relaxed at home Dave McKee said that he didn’t know that Barrow was so hilly. ‘Home at last, two punctures and jelly legs. I’m knackered. Ryan Modlin was surprised that he had made it, having started the day with ‘two wooden legs.’ He did know Barrow was very hilly but pressed on anyway. Sitting in his armchair, Ryan posted on social media, “I’m now tucking into a Carb’ reload, courtesy of a well known Pizza chain.” Creag Williams commented, “it’s character building!” Ian Ward said, “Well, it has been a most enjoyable weekend. There have been some very pleasant sections and some very difficult sections, particularly the Lakes. We’ve had both monsoon and sunny conditions. All that was missing was a blizzard. Over the two days, we have covered a distance of some 138 miles.” 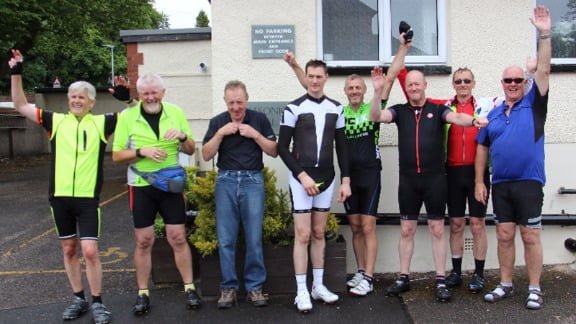 Finally, David Winder and David Randerson offered generous praise summed up by David Winder with his comments, “I cannot thank you enough for your commitment, teamwork and charitable giving.  Putting service before self comes to mind, which is one of the most important cornerstones in masonry. Well done and thanks to you all.” A final sum of monies collected will be announced in the near future.