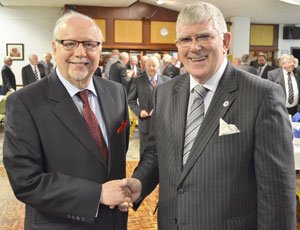 Members of the South Eastern Group of lodges and chapters held their 2016 biennial group dinner at ‘The Venue’ function suite at Urmston Masonic Hall and the principal guest for the evening was of course a very well received Provincial Grand Master Tony Harrison.

There were over 100 group members present including group representatives from Eccles and District and Warrington Groups and all keen to have a chat with Tony and his provincial entourage on this special group occasion.

This time there was a different arrangement to the evening. Whereas in past years there had been a dual arrangement of the evening where the first part of the evening the attendance of first principals and masters along with members in general would take part in a question and answer session where brethren and companions would put questions or any concerns about their Freemasonry in general and receive responses from the various Provincial team members present, the second part of the evening would be the formalities of the dinner itself. 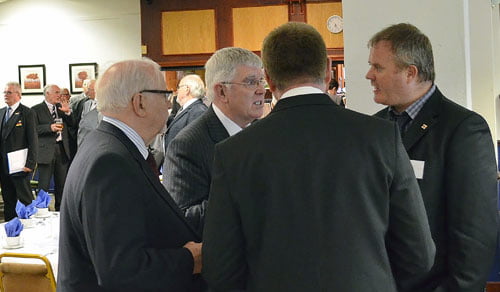 This year, the question and answer forum was dispensed with, and much to the pleasure of the members present. There was a sufficiently allocated amount of time for Tony to intermingle with his provincial guests to spread amongst the membership with what was perceived as a very friendly and informal approach, Tony said he enjoyed the opportunity of speaking to individual members from both the newly initiated members to the more experienced and of course it was perfect opportunity for members to get to know and meet on a very informal basis.

The second part was of the evening ensued which was that time to relax and enjoy the camaraderie of each other’s company at the dinner. There was clearly a buzz of conversation and laughter as the evening progressed and for those who weren’t driving with many a libation being in plentiful supply.

Then came the part of the evening where aside from the loyal toast, an excellent and highly respectful toast was proposed to Tony by Terry Levison, WM of Peel Moat Lodge No 7633. Terry, in his toast did present a short and funny story relating chocolate covered peanuts and elderly individuals preferring to taste and remove the said chocolate leaving the plain peanuts behind. 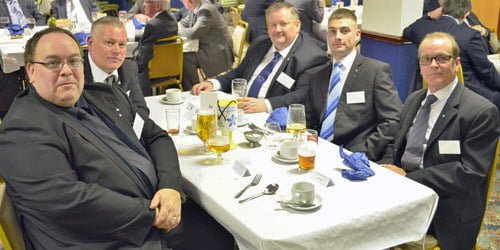 A contingent from the Blue Triangle Club.

Tony responded by firstly thanking Terry for his very well received toast, it did inform, in amusement, of his being thankful in that case, allergy to peanuts. Tony continued by thanking Mike Adams for his initiative for the group dinner and all those officers and individuals involved in making such a fine and well attended evening. Tony also thanked the other officers of the group for all their continued efforts.

Tony said he and his team had enjoyed the pre-dinner arrangements of firstly seeing the newly refurbished beautiful 1881 Masonic hall building with its many facilities and hoped that we all enjoy our future years meeting in the building, and secondly he said he similarly enjoyed the pre-dinner participation in meeting members of both the Craft and Royal Arch.

He said it was important to continue to support our individual group homes as throughout the Province all groups look to support theirs.

He also congratulated the recipients of both Craft and Royal Arch Provincial honours this year, although the Provincial Royal Arch meeting had already passed, he said he would look forward to members supporting his Provincial Grand Lodge meeting on 12 May.

Tony made further and interesting references relating to changes in the care structure, membership, in particular retrieval and retention and more over to attracting new gentlemen into our wonderful fraternity, the work of the publicity officers, the Provincial website, consideration of Royal Arch membership, Masonic and non-Masonic charities and of course as already referred, continued support towards our Masonic halls.

Tony concluded his response on the subjects of the tercentenary of which he said he was thankful to those lodges whom had already each donated £300 towards the festival appeal and it was a pleasure, he said, to see such fine support coming in from lodges of which are most gratefully received, and finally for his wish in us all continuing to enjoy our camaraderie in Freemasonry. 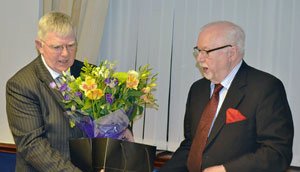 Tony having received an excellent response from the brethren and companions, Peter Schofield then rose to propose a toast to the South Eastern Group. Peter made special reference towards charity in Freemasonry but more over to the registered charity set up by two South Eastern Group Freemasons, Ezra and Nathan McGowan, who have worked tirelessly is supporting homeless individuals and in general to provide those less fortunate with food, clothing, crisis packs and even tents through their Forget Me Not Trust.

Peter said we should look to supporting their efforts in assisting others as this is a fine example of Freemasonry in the community. Peter also made reference to the newly formed Blue Triangle ‘light blues’ Club, of which was being represented in fine numbers during the evening, those club members are reasonably new into Freemasonry and have a good agenda in their own committee in promoting new Freemasons to join along with new membership initiatives working with the group membership officer if need be.

Peter said that during the evening it was pleasing for him to hear and learn of all the group initiatives, he saw the group were clearly in great shape and said he had been impressed by the evening. He congratulated Mike and the various officers wishing the group well for the future.

Mike Adams responded by thanking Peter for his toast and said he had made the group sound ‘quite fantastic’, Mike thanked everyone for attending and most specially welcomed Tony, the wardens, the Provincial Grand Secretary, the grand director of ceremonies and his deputy for their most welcome presence and support during the evening.

Mike thanked the staff of the hall for their work in providing the dinner and all those involved in planning and of course attending the dinner. He made special notice to the group officers for all their support and to those who were no longer in office for their previous support, he said since the last group dinner there had been changes not only in the group executives but also in the roles of our group APrGM and AtoPrGPs.

He made special reference to the group membership officer, publicity officer and group mentor and also to those individuals involved in forming the Blue Triangle Club, a club which is potentially a future aspect of the group, Mike wished their progress well.

Then on behalf of the group, Mike presented a bouquet of flowers to Tony for him to take home to his wife Maureen. Tony thanked Mike and the brethren for the presentation which brought a most excellent memorable group dinner evening to its conclusion.

Diners at the festive board.