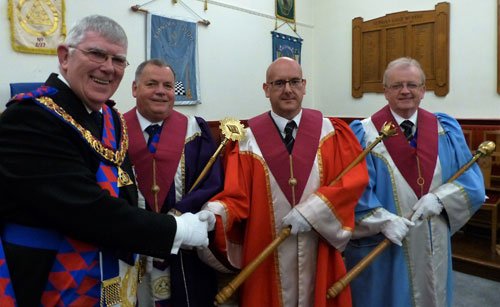 The attendance of the Grand Superintendent Tony Harrison is always a special occasion at any meeting and over 50 companions convened in the McCausland Suite at Widnes Masonic Hall for the installation meeting of Loyalty Chapter No 897.

Before the chapter opened scribe Ezra, Alan Bristow, read the dispensation for the meeting to be held at Widnes, as Loyalty Chapter rotates it’s meetings between Warrington, Widnes and St Helens.

At the opening of the chapter, the first principle Les Norton gave an address to the companions after which the normal business was completed. The Provincial Grand Director of Ceremonies Paul Hesketh entered the chapter and announced that the Grand Superintendent was without and demanded admission. Les Norton replied by saying that the companions would be honoured to receive him.

Tony was warmly greeted by the three principals; Les Norton, John Gibbon and Andy Barton, who hoped he would enjoy the installation ceremony and later at the festive board. He was then offered the sceptre for which he thanked them for but returned it on this occasion. 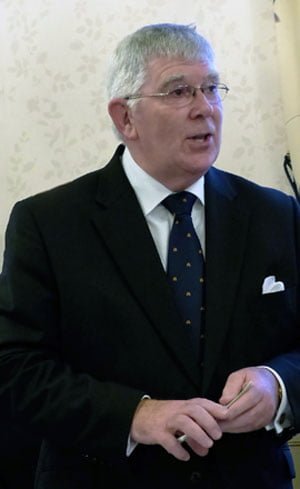 Tony responds to the toast to his health.

At the conclusion of the installation ceremony Tony stood and congratulated the three principals and wished them good health and a happy year in office. He also congratulated all those companions who contributed to an excellent ceremony. Ian then presented cheques to Tony; £897 for the WLFC and £100 to each of the masonic halls of Warrington, Widnes and St Helens. David Burgess then gave an exceptional recital of the valedictory address. The alms plate collection raised £170 for charity.

The chapter was then closed and the companions retired to a fine banquette in the Alan Locke Suite. Barry Jameson proposed the toast to Tony who responded, firstly, by thanking the many group officers for attending. He reminded the companions that they should encourage as many none members of the Royal Arch in their lodges to join. 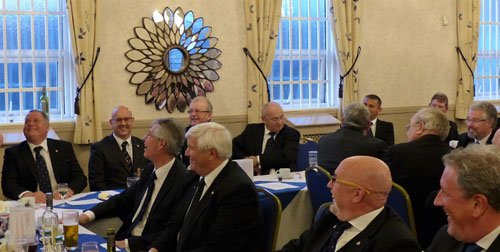 Tony also talked about the tercentenary celebrations and was pleased that members of Loyalty Chapter would be taking part in the Time Line Project organised by the St Helens and Prescot Group. He went on to mention the new Masonic Foundation Charity for which the West Lancashire Freemasons have been chosen as the first Province to hold a four year festival in support of the charity, commencing in 2017.

During the festive board a raffle was held which raised a further grand total of £280 for charity. The evening was concluded by the janitor’s toast which was proposed by Nat Killen.